I'd hummed and hahhed about whether I was fit enough to do a walk of this magnitude and when I got up on the Saturday morning and checked out the weather forecast decided I wasn't going to do it!

My BFF (Brenda) and her family were staying in Mountain Cottage in Stair in the Newlands Valley so I would be driving there from our lovely static caravan at Whitegate Caravan Park near Appleby to walk the Coledlale Horseshoe with them starting at the cottage. I texted Brenda to say I wouldn't be doing it because I thought a) the weather would be too bad and 2) I wasn't fit enough to do 9 miles up these big mountains.  So, miserably I sat and had my breakfast and after feeling sorry for myself, gave myself a good talking to and told myself not to be such a defeatist and text her back to say I'd changed my mind but would we be able to cut it a little but shorter to say 7 ish miles and she replied saying yes as there were plenty of "escape routes" along the way. So, without further ado I packed my rucky, loaded  the Heidster in the car and off we jolly well went.

We started the walk from Mountain Cottage and picked up the right path easily and from then on it was up, up, up and up!  The first summit we would reach would be Causey Pike 637 m (2090 ft).  As we started off it was very cloudy and a bit drizzly so we put waterproofs on because, according to the BBC weather app, it was going to be light rain most of the morning with heavy rain at 12 o'clock.  I'm happy to report that the BBC got it wrong and the early light drizzle stopped almost straight away and the clouds parted and the sun started to shine, making it a very very nice day to walk. 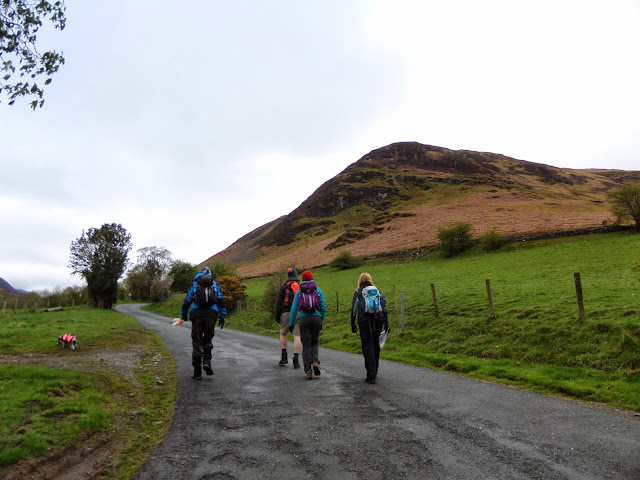 The path up was easily distinguishable and as you can imagine, the higher we went the better the views became.  We ascended steadily across the northern slopes of Rowling End reaching the rocky summit of Causey Pike 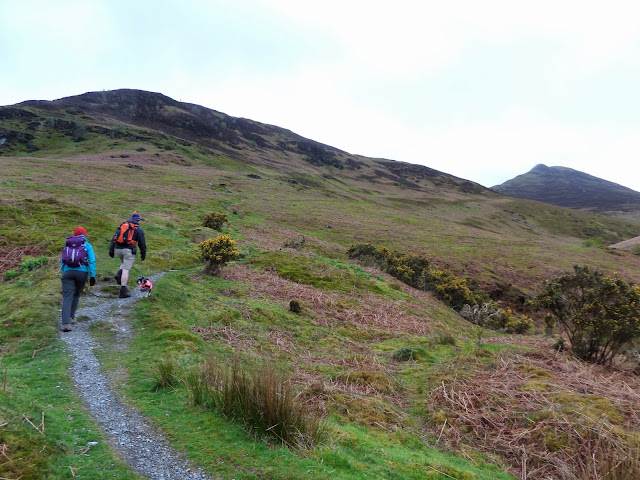 And so it begins - up, up, up with Causey Pike's craggy top now visible 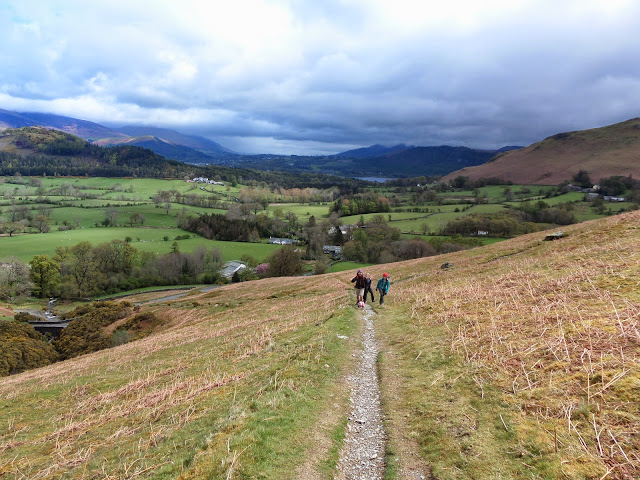 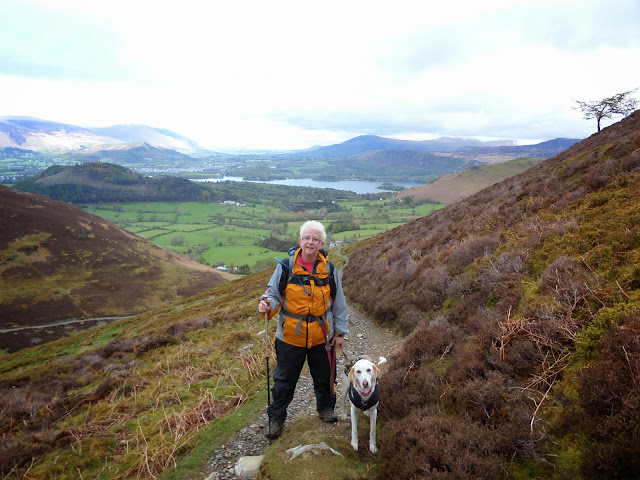 Heidi taking it all in her stride - I'm knackered already haha 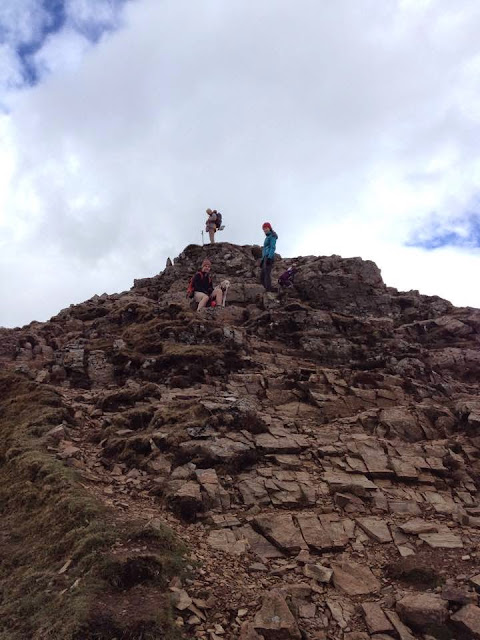 Now you can see how rocky the summit is - the BFF's going to hate this scramble! 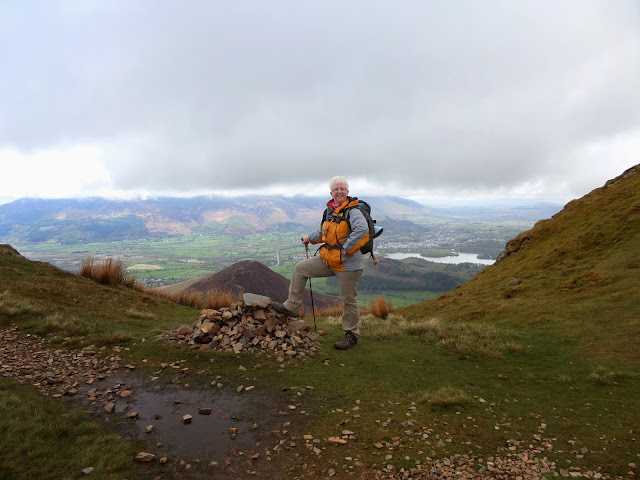 When we arrived at the top of Causey Pike there were two men there who told us that we would be overtaken very shortly by about 100 fell runners who had just set off from the bottom.  It was amazing to see people actually running up here when I could hardly even walk or get my breath. Respect to them - they were RUNNING 9.5 miles. 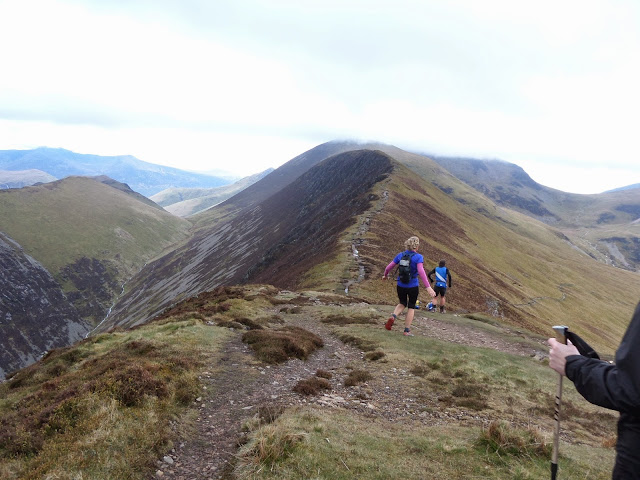 The paths on this walk were all very distinguishable and easy to follow and this was a great ridge walk, taking us to the next summit of Scar Crags 672 m (2205 ft) which was slightly higher than Causey Pike, taking us to a grassy plateau.

Our journey then took us up Sail 773 m (2536 ft) and on to Crag Hill 839 m (2753 ft) but as you can imagine once we'd reached the top of one hill there was often a downhill before going back up again.  My legs felt like lead weights and I know I wasn't the only one but the views at the top of all these magnificent mountains were well worth the agony.  At the time I was saying "why am i doing this" but once I'd stopped to "admire the view" and got my breath back I knew exactly why I was doing it! 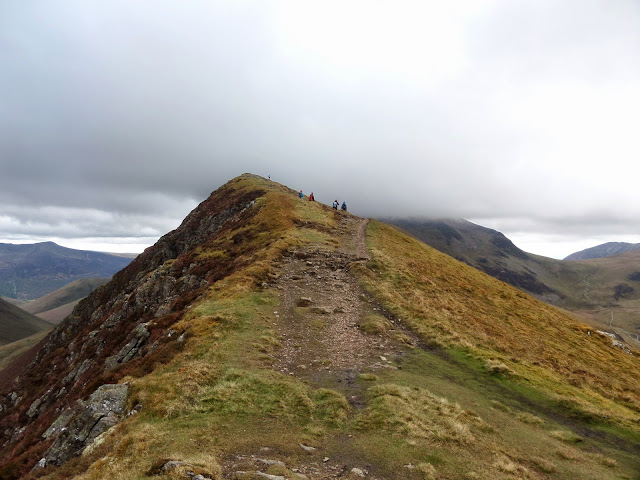 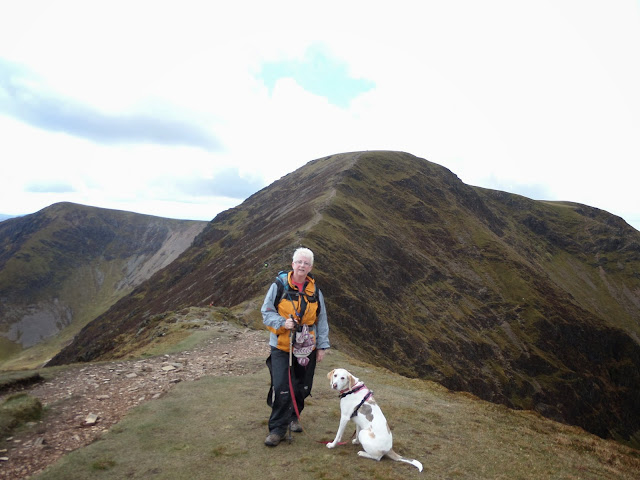 Do I look a bit tired here? What goes up must go down, then up again! 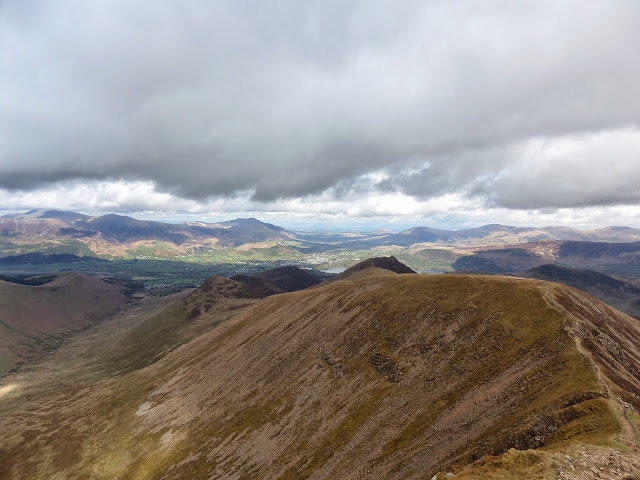 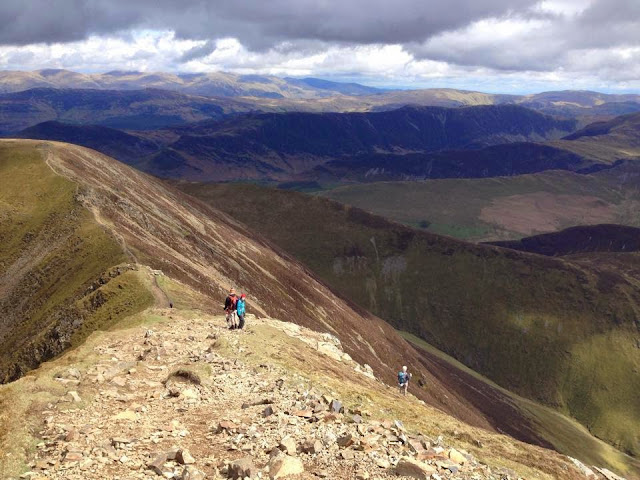 Crikey, this is a bit steep 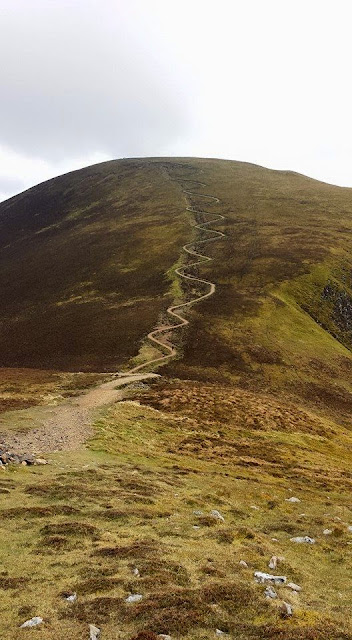 Crag Hill - Aghhhhh not another uphill!!!!

Once we were descending Crag Hill we took a path to the right along Coledale Hause which would then take us on to another path that would run parallel with Coledale Beck towards Braithwaite. Paul wanted to continue up Grisedale Pike but none of the rest of us could be persuaded to do it.  We knew that the rest of our journey would be no shorter than the route up Grisedale but we couldn't face any more uphills - our little leggies just couldn't take any more inclines! 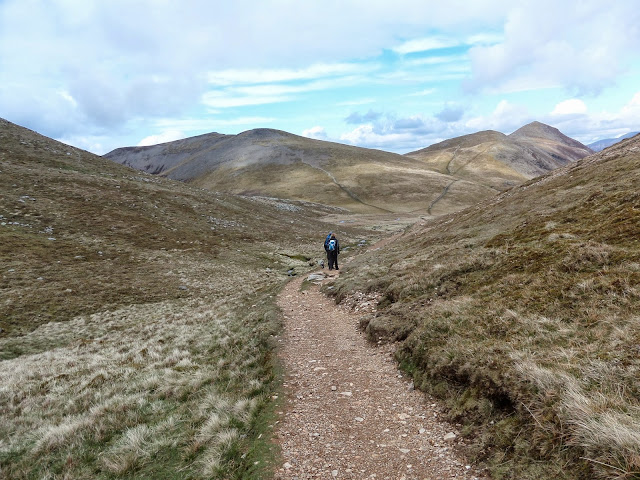 Finally, we were on the downward part of our journey

You would think we wouldn't be complaining about this part of our walk but no, we now moaned about how downhills made our knees and thighs hurt!  Some people are never happy!! 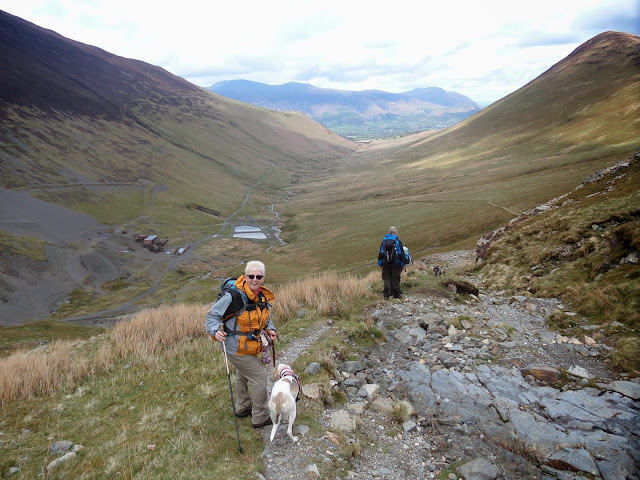 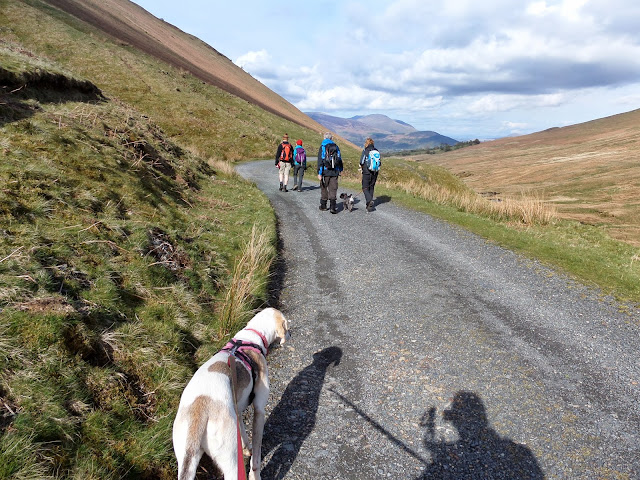 The last two miles along this path seemed more like five! but the Heidster was still raring to go! Now then, where's the pub?

We made our way to the nearest pub (The Coledale Inn), arriving around 6 pm and couldn't wait to take our boots off for a while.  We sat outside soaking up the last of the warm sun until it sank behind the building, then we took ourselves inside and ordered some food.  We all had something different to eat and think that we all agreed that the food was outstanding - freshly cooked and extremely tasty.

After we had eaten we then had another couple or miles to walk back to the Cottage in Stair but surprisingly my feet weren't sore any more and my legs didn't feel too bad either - I obviously needed the rest.  Having said that I couldn't wait to get back to the caravan and have a nice, hot shower and put my jim jams on ready for bed!

I would definitely recommend doing this walk and if you're fitter than me do Grisedale Pike too. We were so lucky with the weather in the end, and had the most spectacular views ever.

I suppose I'm  going to have to do it again with the Hubster when he's home!

Distance walked - 9.5 miles according to Memory Map (notice we missed the "escape route" which we were going to take to shorten the walk!!!!)