Rannerdale Knotts and a million Bluebells - Sunday 24 May 2015 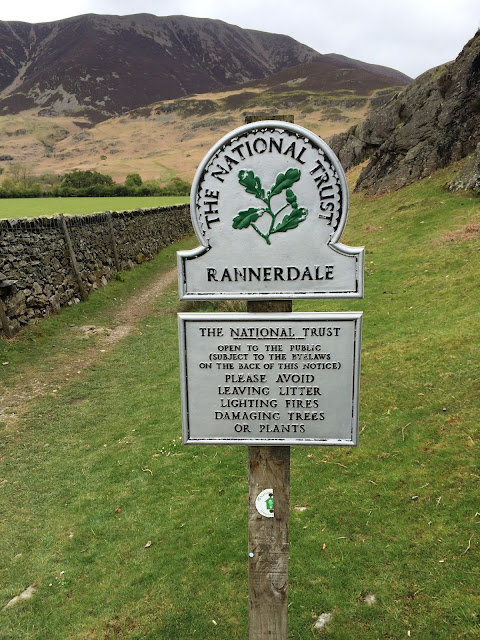 This late May bank holiday weekend was a particularly good one for me walking wise.  On the Saturday I'd taken part in a guided walk up Ullock Pike which was lead by voluntary Lake District National Park rangers.  It was the most fantastic ridge walk but quite strenuous and to say I was stiff when I woke up on the Sunday was an understatement, but I'd already arranged to meet friends Caroline and Susan with their wonderful trailhounds, Zach and Pandy, to go on a nice, easy walk at Buttermere so I had no excuse to sit around and feel sorry for myself.

I drove to Mountain Cottage in Stair where Caroline very kindly fed and watered me then Susan drove us to Buttermere to walk at Rannerdale Knotts where there was an abundance of Bluebells that were getting a lot of publicity by a lot of people both on both Facebook and Twitter.  I have to say the reports weren't exaggerated - it was a stunningly beautiful walk and although I was aching from head to foot, enjoyed every minute of it.

If you're familiar with this area you will probably not need to be told that it was a very busy place. Bank holiday weekend in Buttermere = no where to park, so we had do drive a bit further along the road and managed to squeeze on the end of a line of cars parked on the road side  next to Crummock Water. 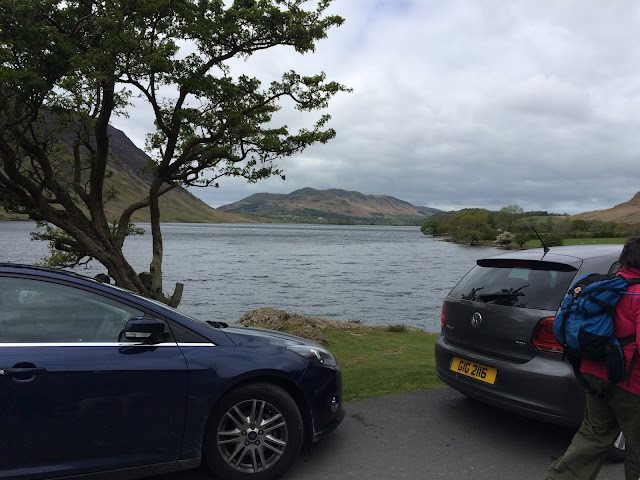 Tucked in at the back of the line of cars 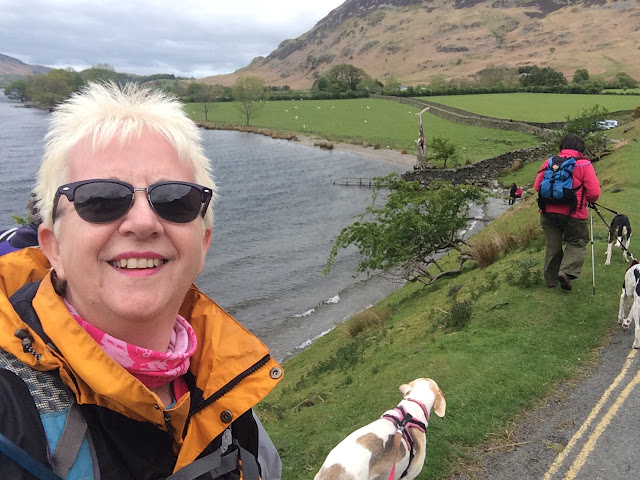 Come on then, where's these here Bluebells? 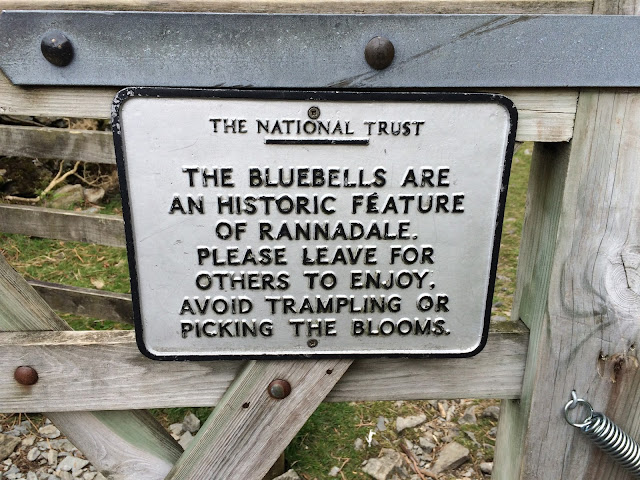 The start of the walk was just about 100 metres from where the car was parked and as soon as we got on the path we could see the blue hue on the hillside directly in front of us. 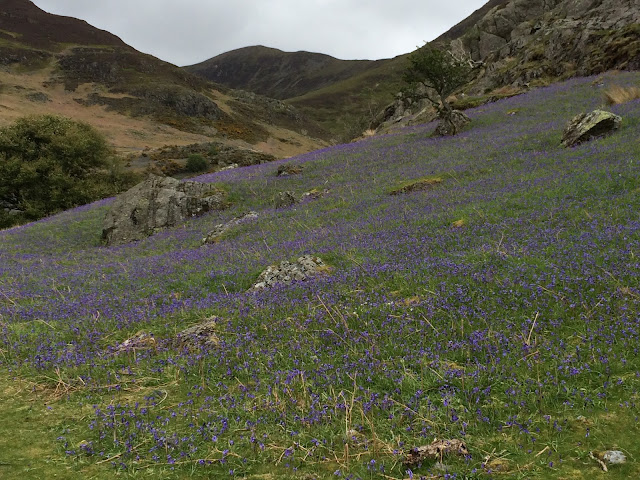 I've never seen as many flowers as this in one place! 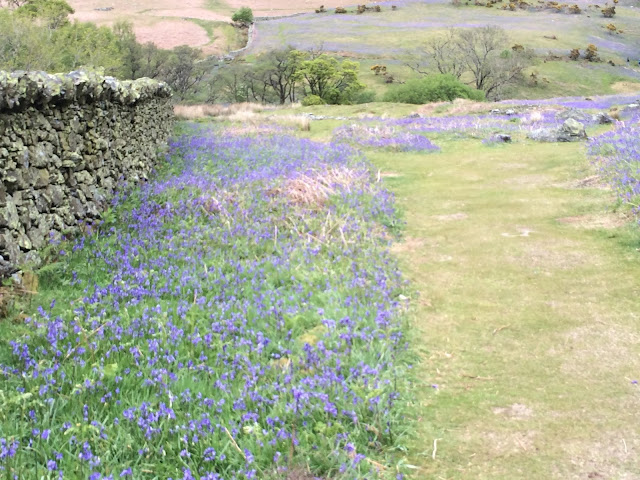 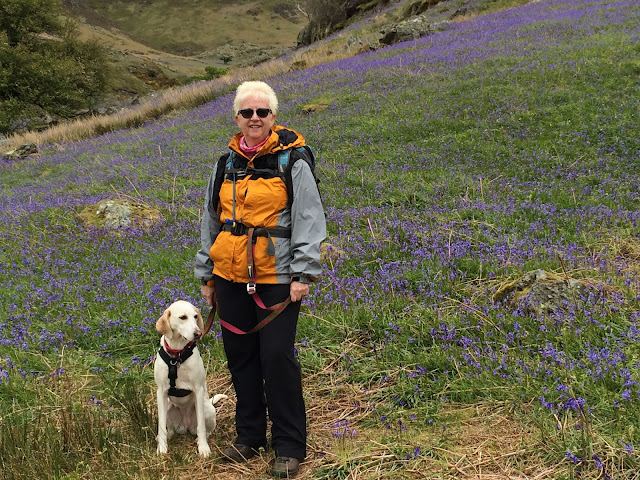 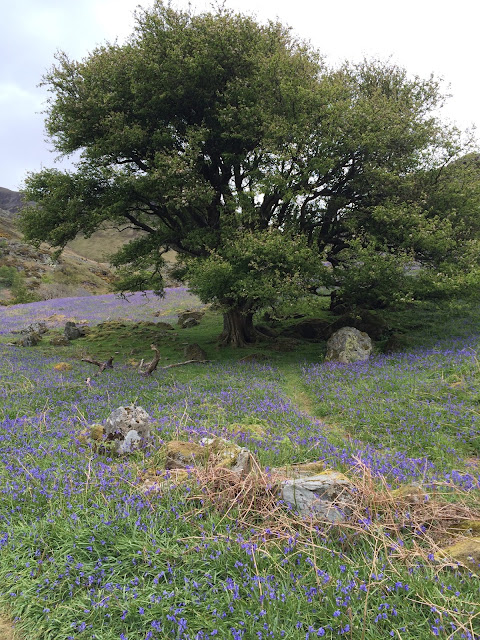 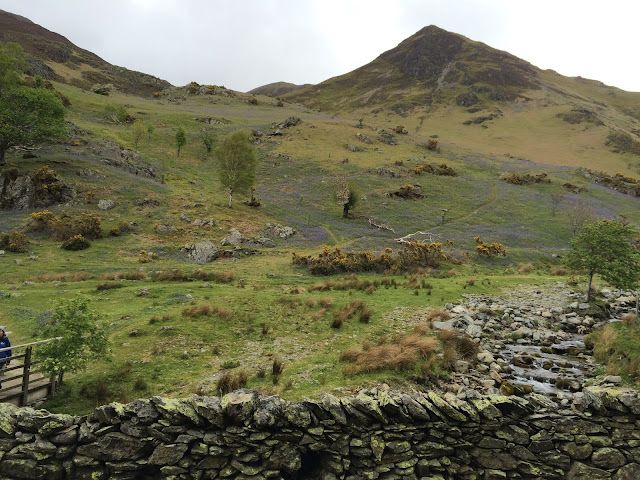 This walk is a lovely, easy walk which is ideal for doing when you're not feeling too energetic but just need to get out and have some fresh air or if you're new to walking and want an easy walk with great views.  It skirts around Rannerdale Knotts along Squat Beck into Buttermere where it is mandatory to have an ice cream, which we duly did. 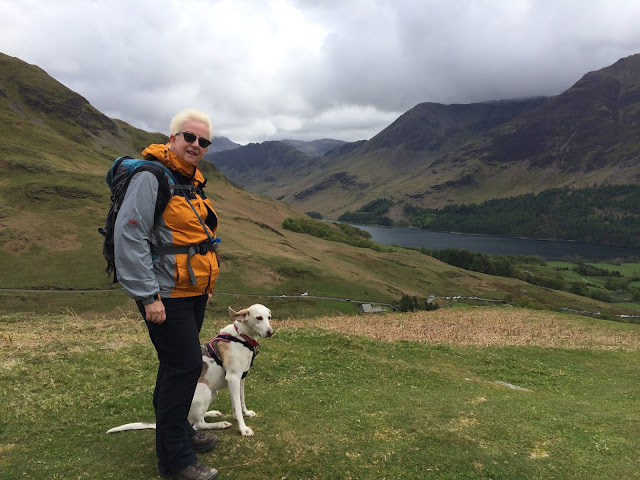 Descending with Buttermere in the distance - must have been windy judging by my hair style and Heidi's flapping ears! 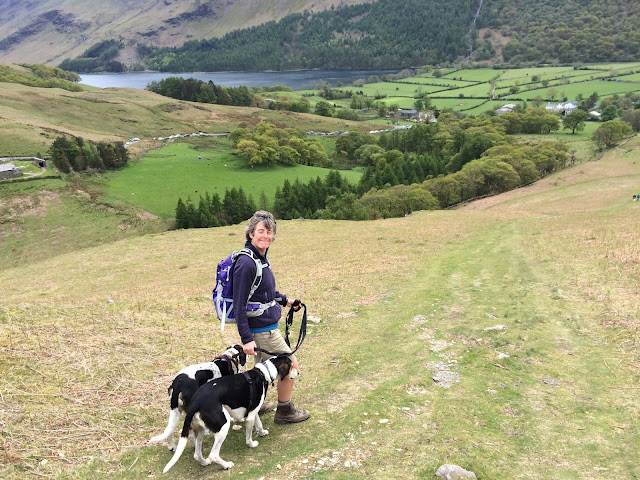 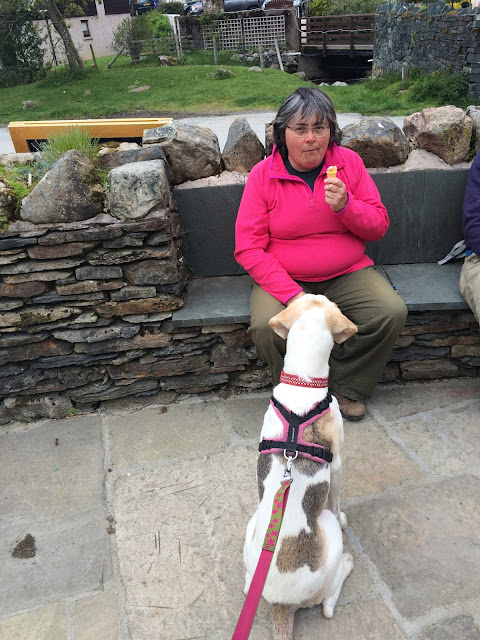 With mine and Susan's already eaten, Heidi lives in hope that Caroline will share

Our route then took along a small stream to the outskirts of a camp site where we were accosted by a grumpy old fella that we concluded must have been the owner. Very gruffly he asked us what we were doing,  to which I replied "we're walking". He said "I can see that - the path's over there" pointing to the path that we were trying to get to which was through a gate next to the stream.  When I tried to open the gate it seemed to be stuck/locked so we turned around and he asked us where we were going now so i told him the gate was locked.  "NO IT'S NOT" he replied and he came over and easily opened it - I was obviously having a blonde moment trying to open it the wrong way!.  He made some other remark so I laughed and called him a cheeky buggar to which he huffed and puffed and said he wasn't it was "you women!!!". I'm not exactly sure what he meant but we were now on the right path and laughed at him strutting around looking for other's to chase off his site. 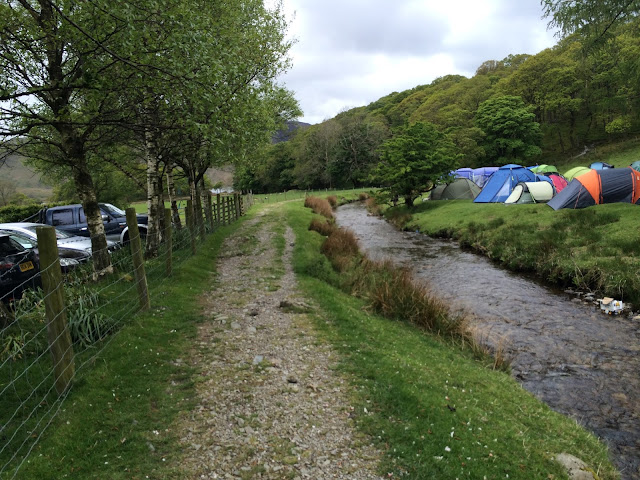 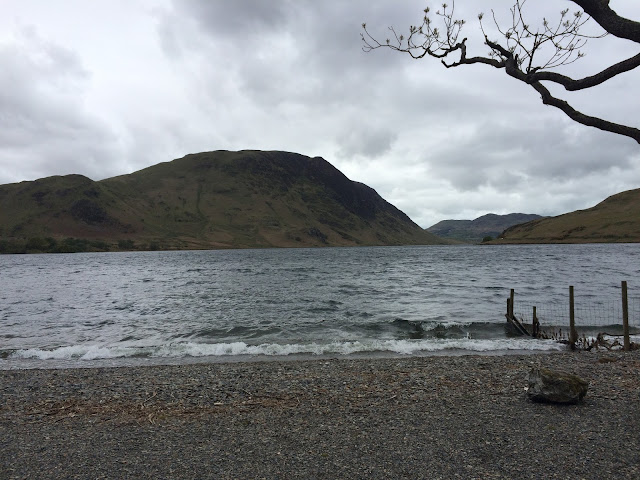 Crummock Water looking quite choppy with all the wind

We walked around part of the lake till we had to cross over the main road and take a track along the side of Rannerdale Knotts and to be honest, even though it was only about 500 feet above the road, we had fabulous views along the lake.

This part of the walk took us back to where our car was parked and ended a very lovely walk - another walk that I'l have to do with the Hubster when he's home.

PS - The roads leading to Buttermere are narrow and winding but must be one of the most spectacular routes to drive along, especially of you approach from the Newlands Valley.