As we would be celebrating our 30th wedding anniversary on 9 July 2013, the Hubster and I decided that we would like to have a special holiday somewhere we would never normally go to.  Our friend Carol and her husband Ian had been on a holiday using a company called KE Adventure based in Keswick and rated them very highly, so I loaded up their website for a look-see.  We had often said we would like to go to the Himalayas so I started looking at what they had to offer in Nepal.

As I've no doubt already mentioned I hate camping so our choice would have to be somewhere that we could at least have a basic bed and as far as possible our own shower and toilet, and the one that fitted our requirements was the Annapurna Panorama Trek.

Our journey took us from Newcastle - Heathrow - Istanbul - Kathmandu.  It was a long journey but was worth it just to see the mountains coming into view on approach to Kathmandu. 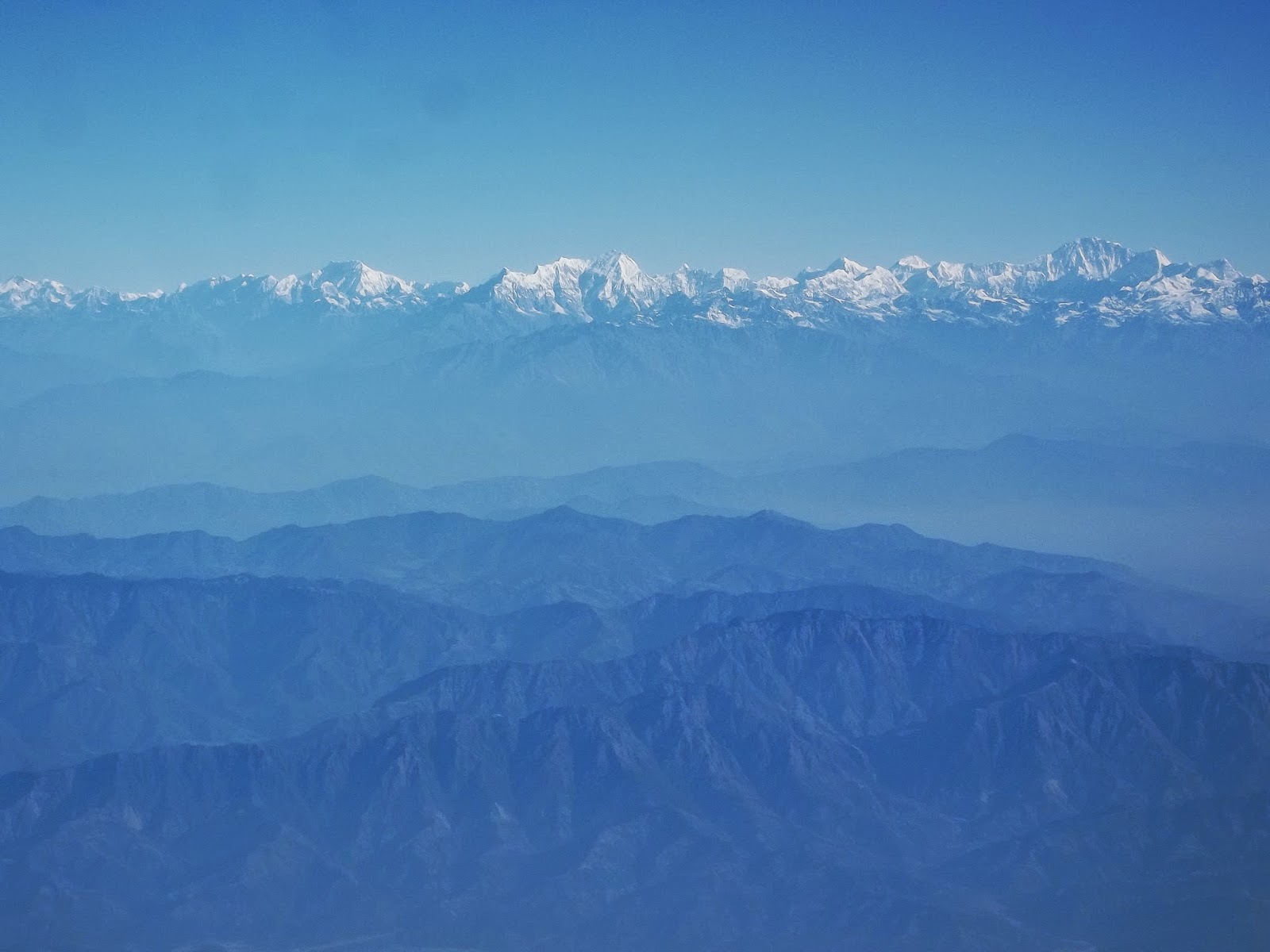 We were met at the airport by our guide, Kami Sherpa, who would be with us for our whole stay. After we dropped our baggage off at the hotel we decided to go have a look around Kathmandu and boy what an eye opener!  To say the place was chaotic is an understatement - I've never been anywhere like it.  The place was dusty, dirty, busy, noisy - almost EVERYONE just had to honk their horn and they drove like lunatics!!! but was a fascinating place to experience. 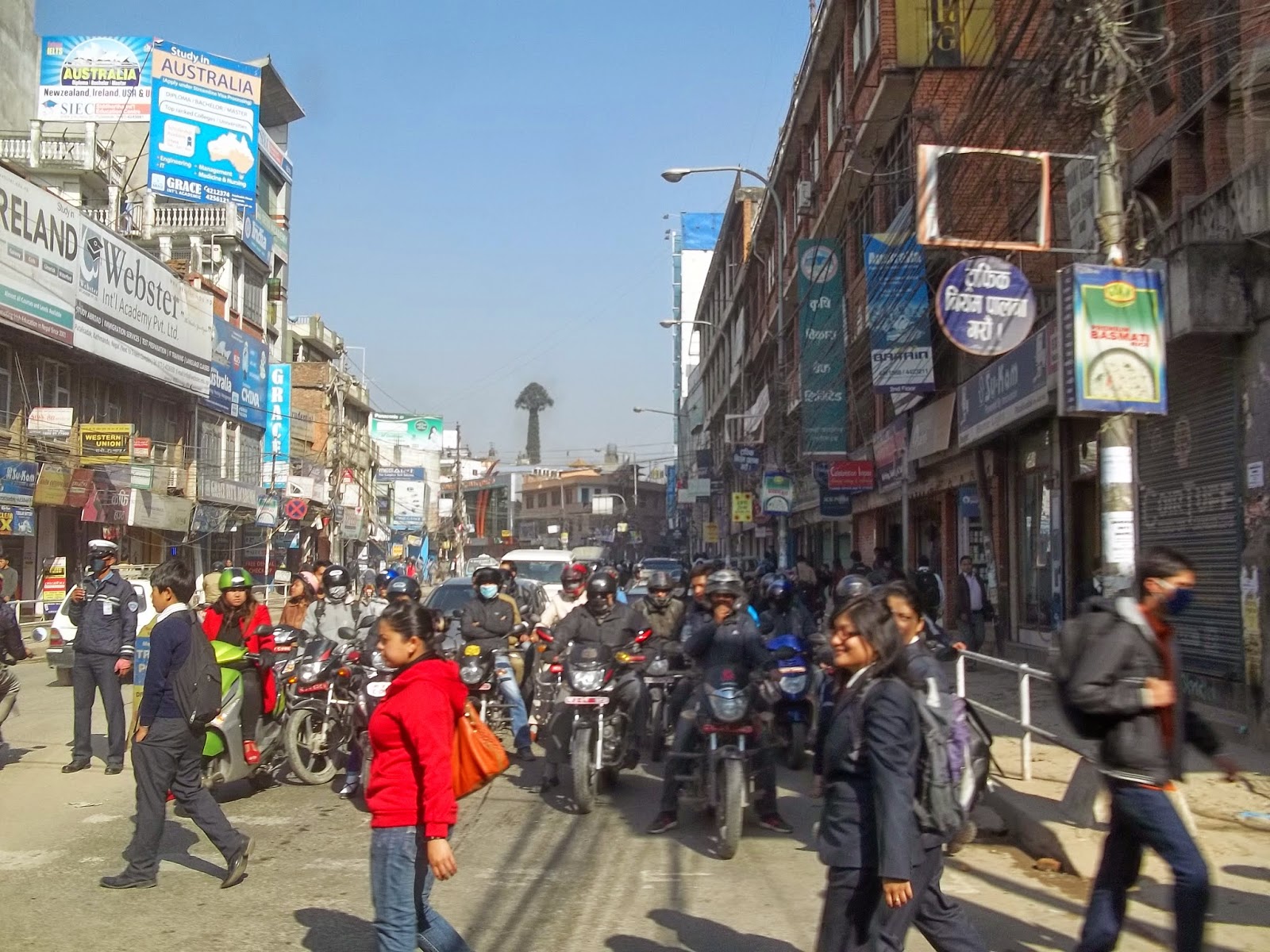 Chaotic traffic at all times of the day! 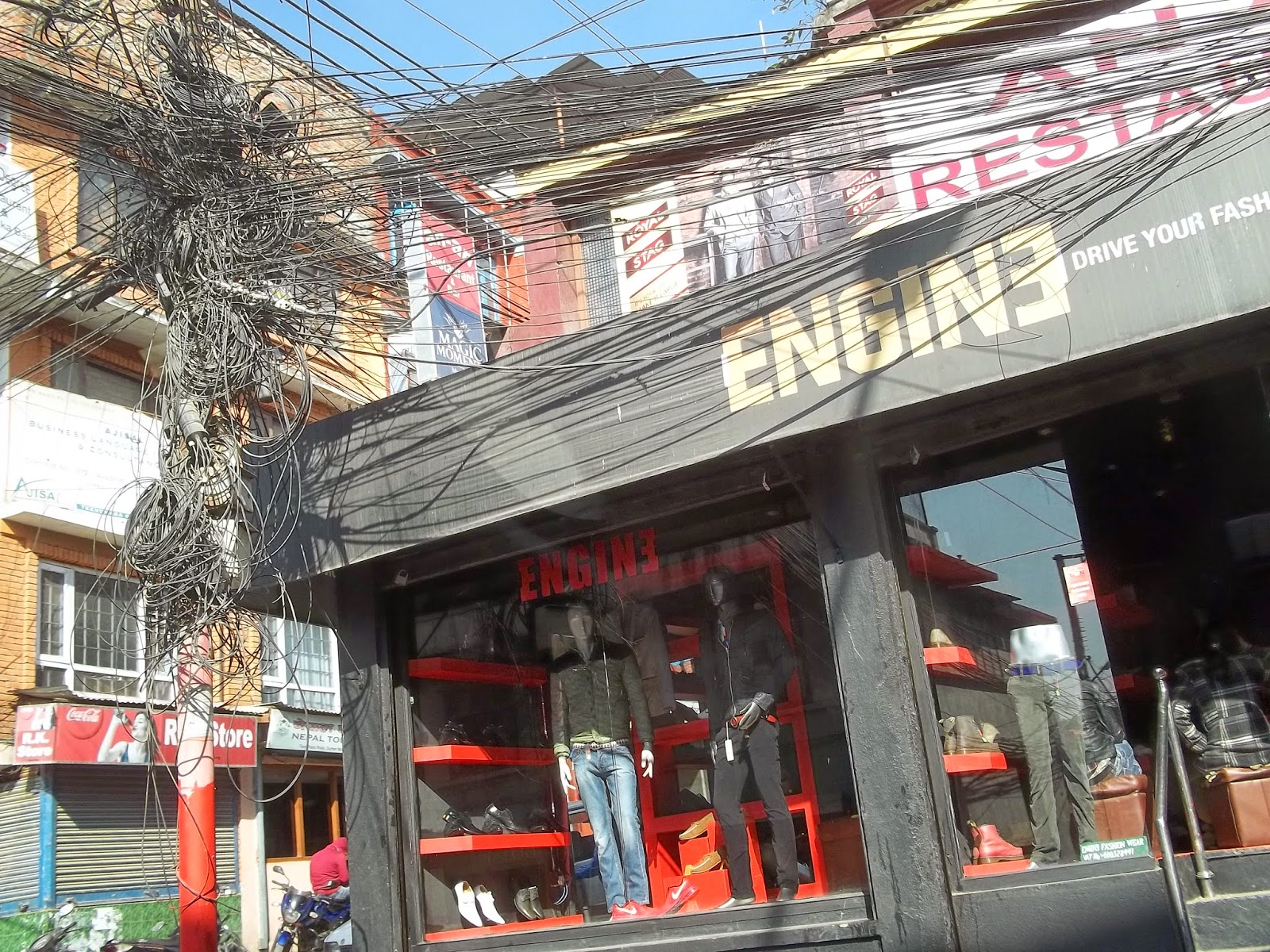 Their electric wiring system leaves a lot to be desired

The only other person on our trek was a lady called Mary who was lovely.  Mary's brother Andrew who lives in Canada flew over to meet up with us before heading off on his own trek to do Annapurna base camp and then he would meet up with us again later in Pokhara after at the end of our trek. 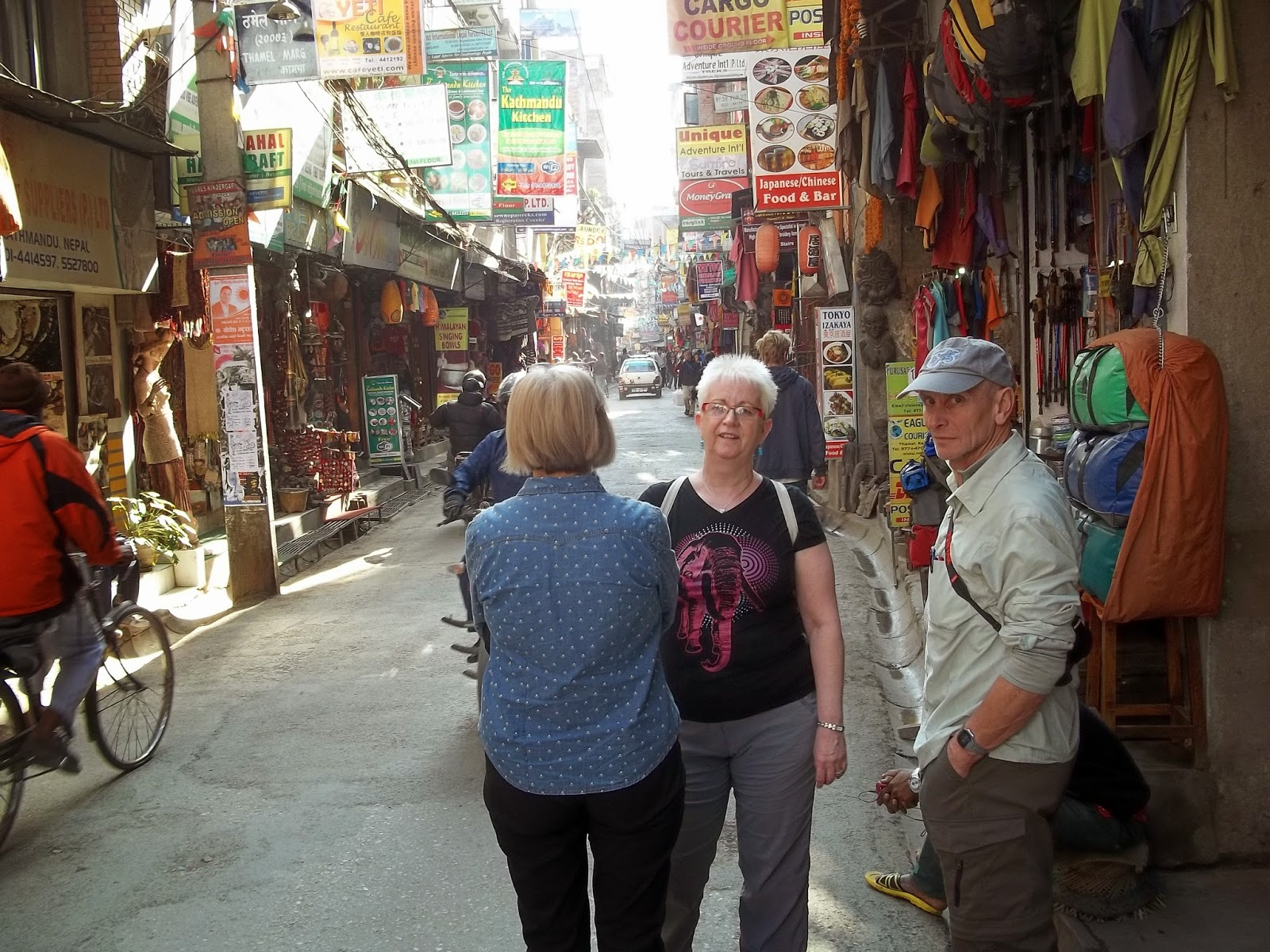 Checking out the shops with Gavin (behind the camera), Mary and Andrew in the Thamel area 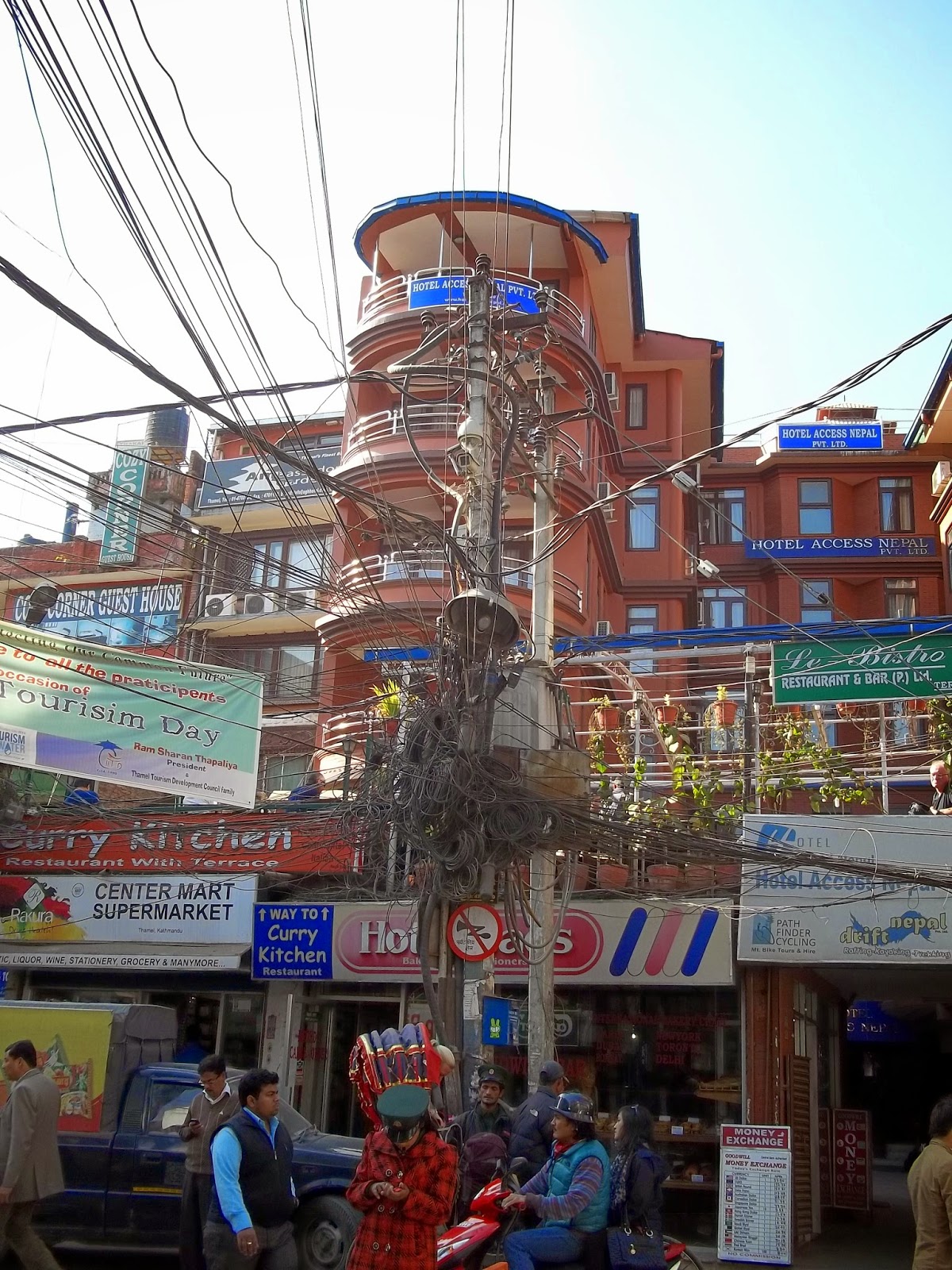 No wonder they were always having power cuts! 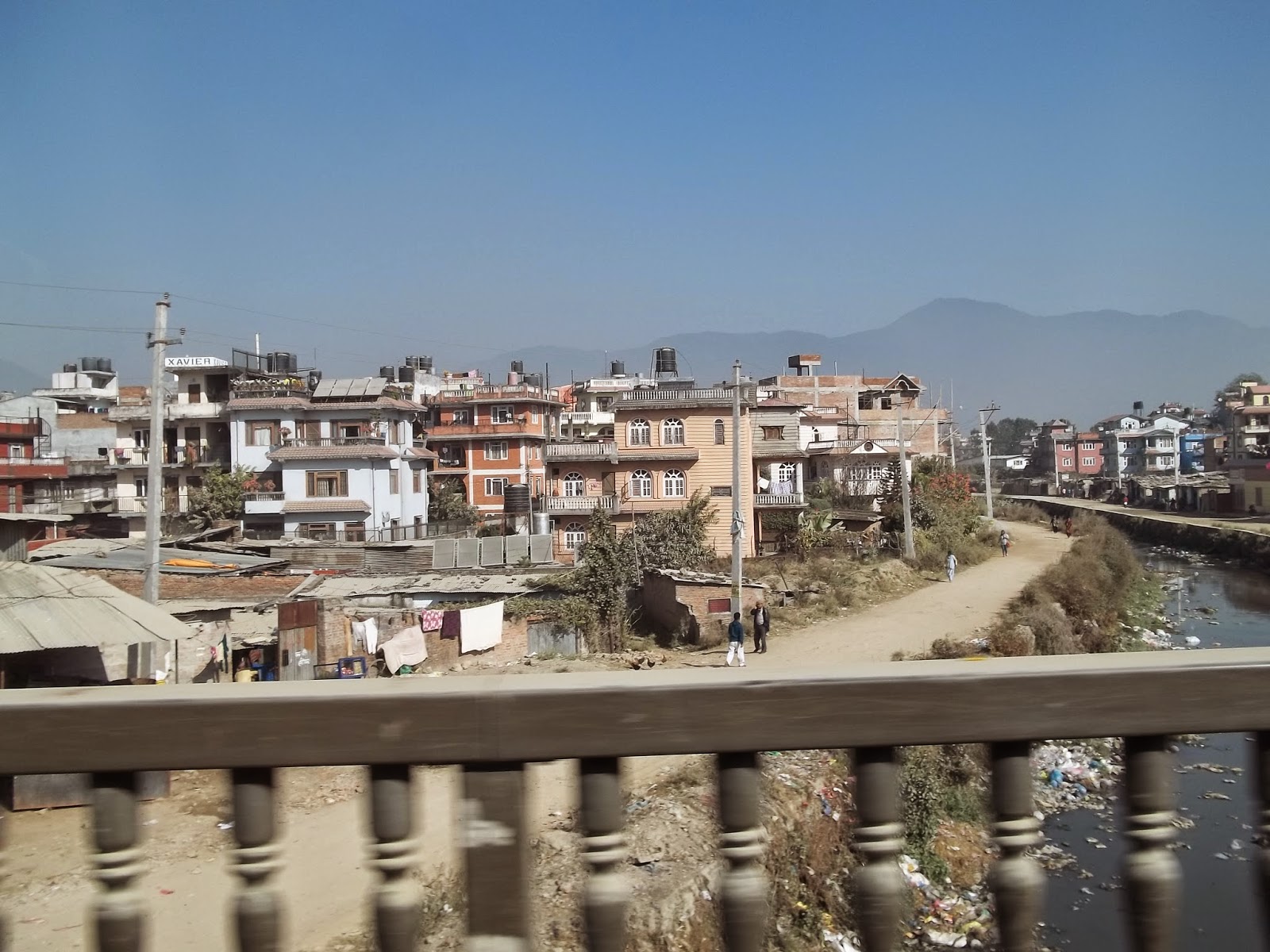 In order to help us acllimatise to the altitude our second day was purely sightseeing so we had a guide who took us to see the Boudahnath Stupa in Kathmandu and then to Bhaktapur to look at the temples there. 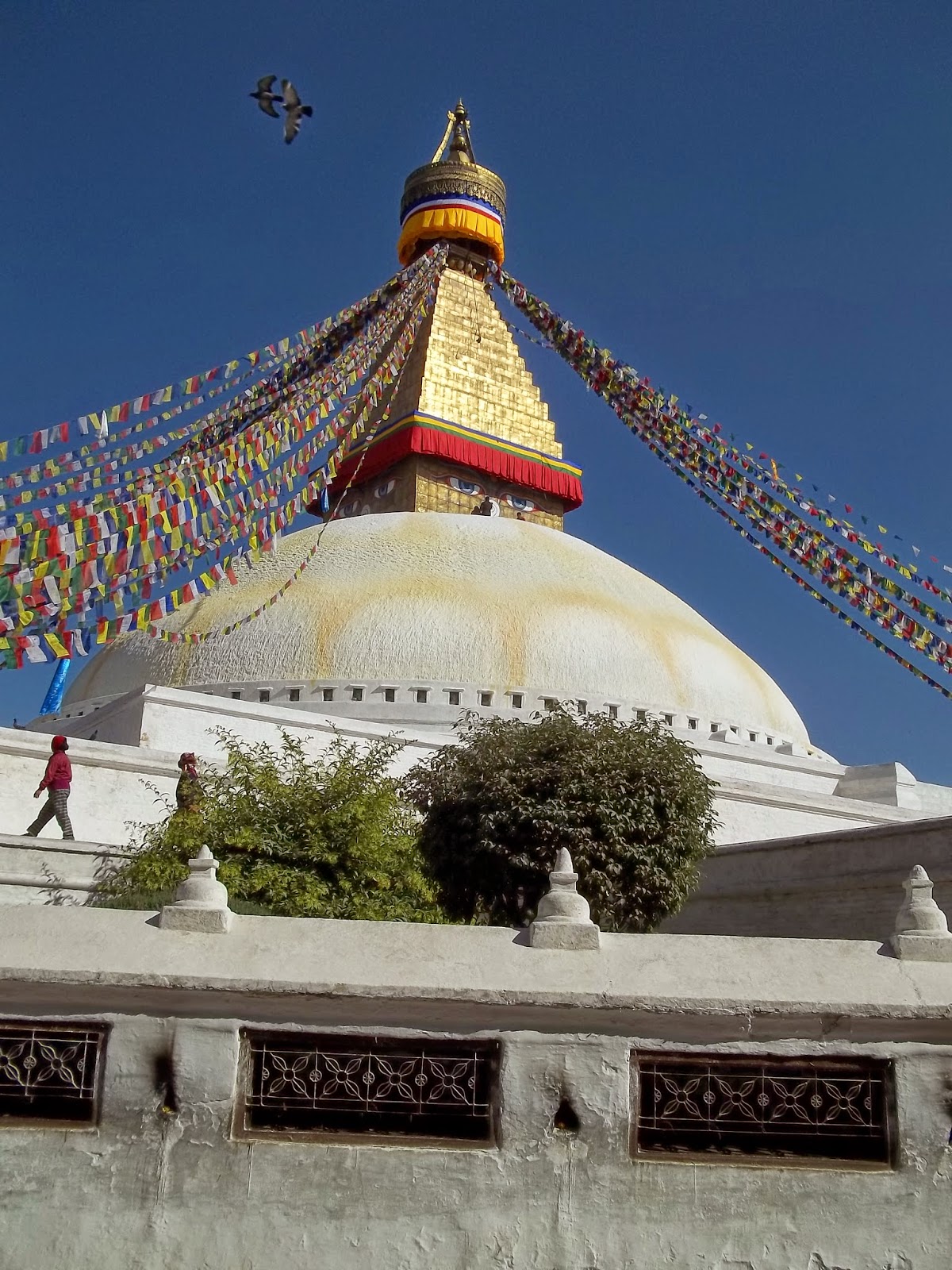 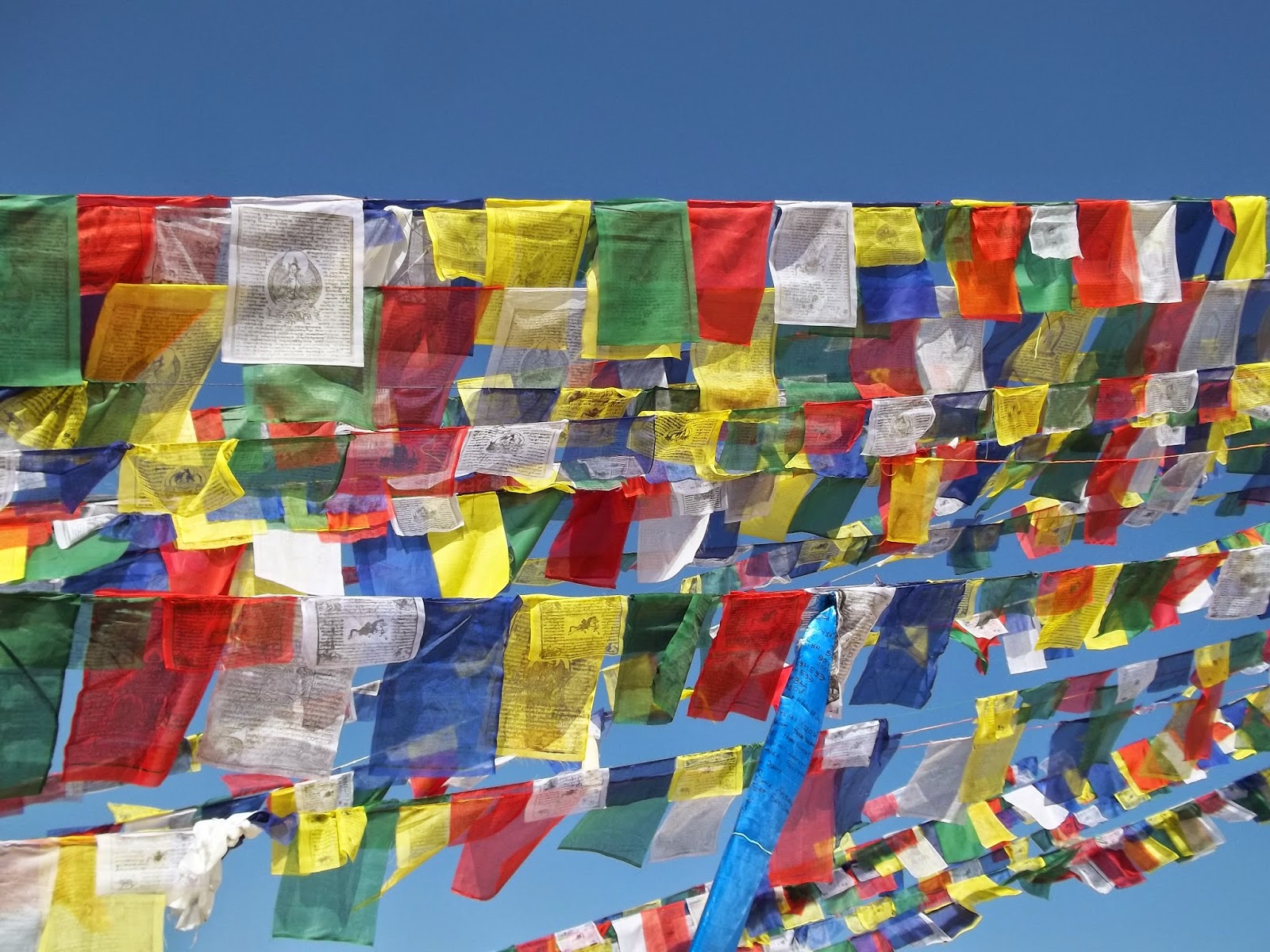 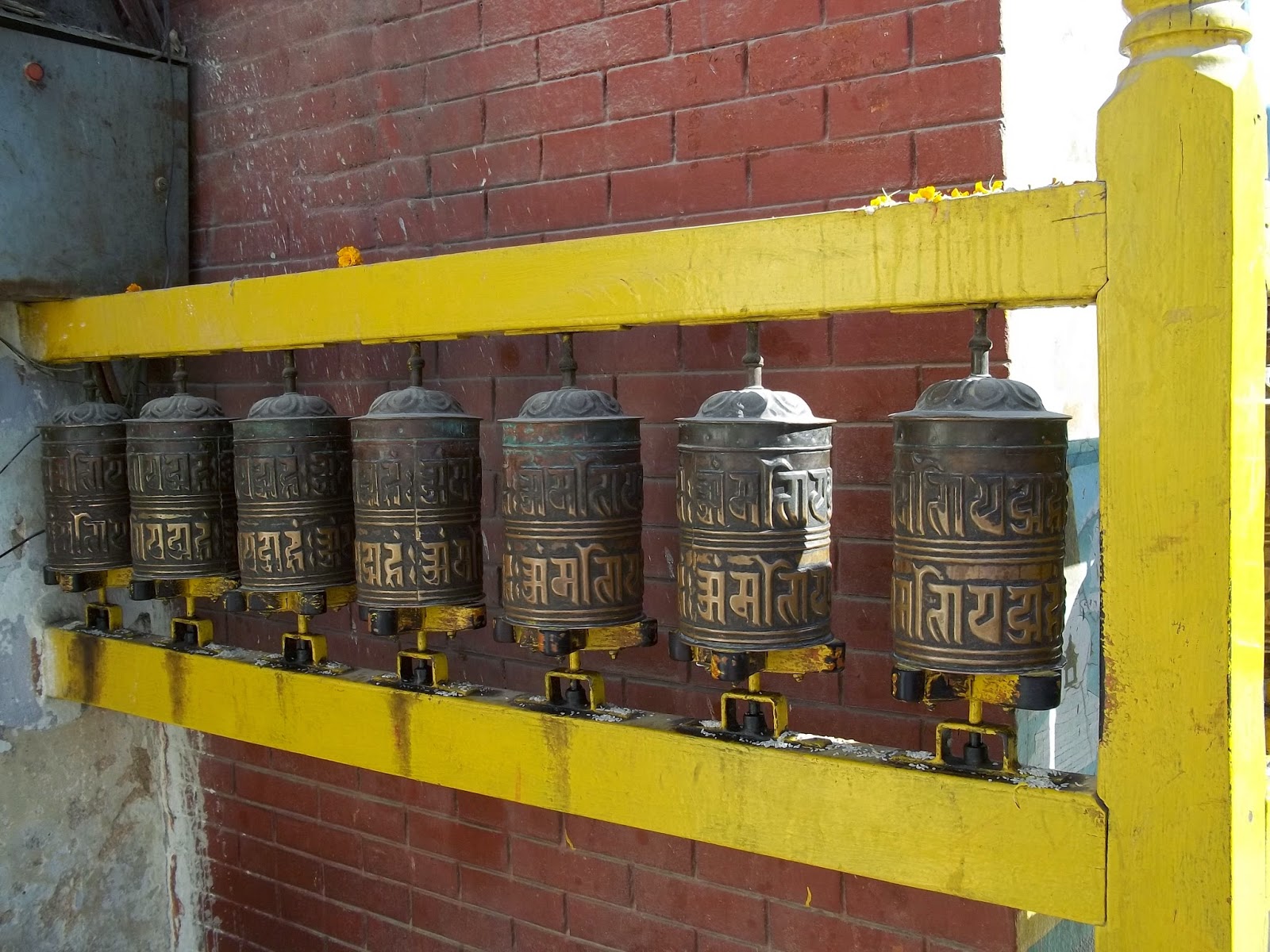 Small prayer wheels at the entrance 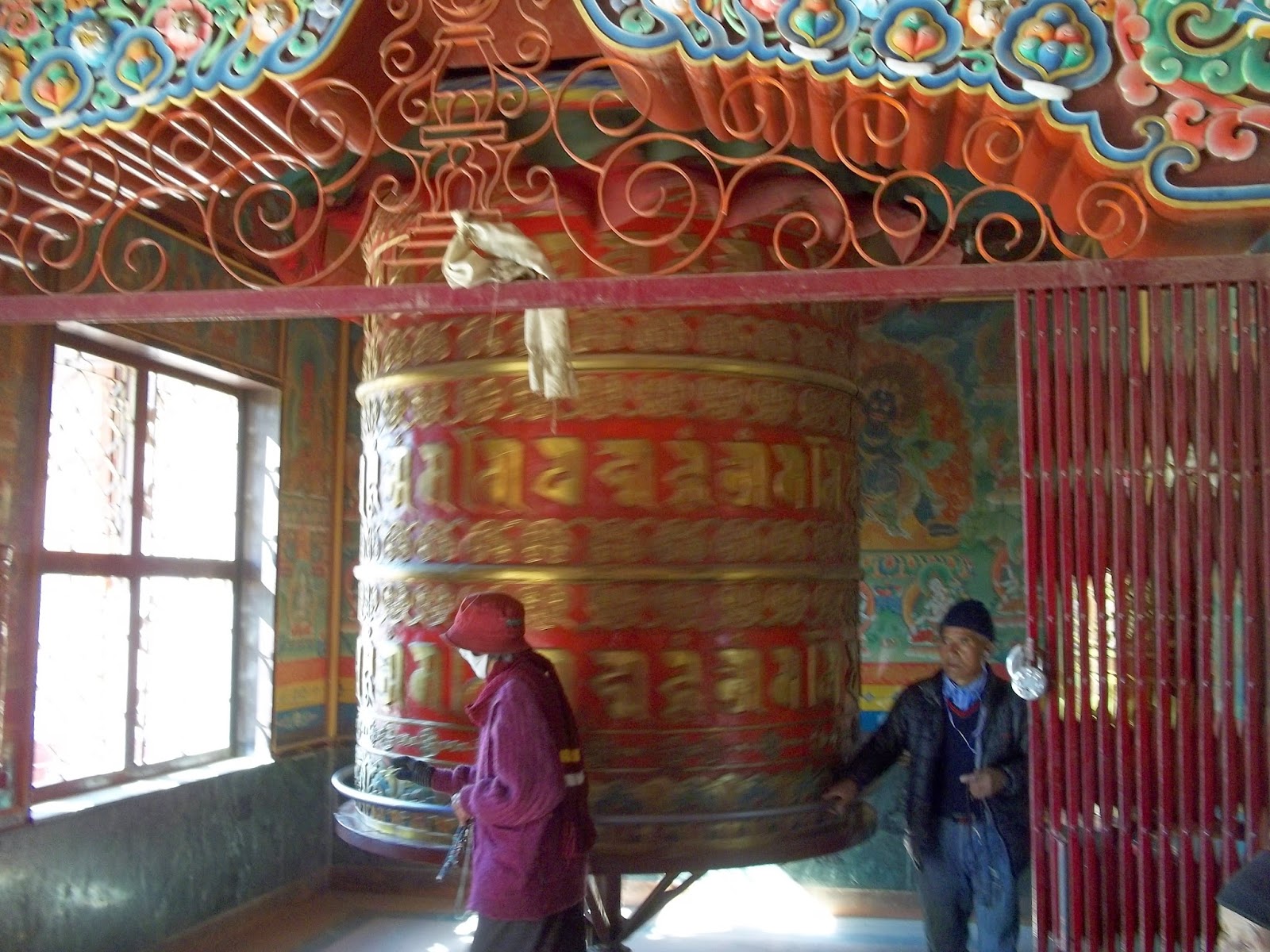 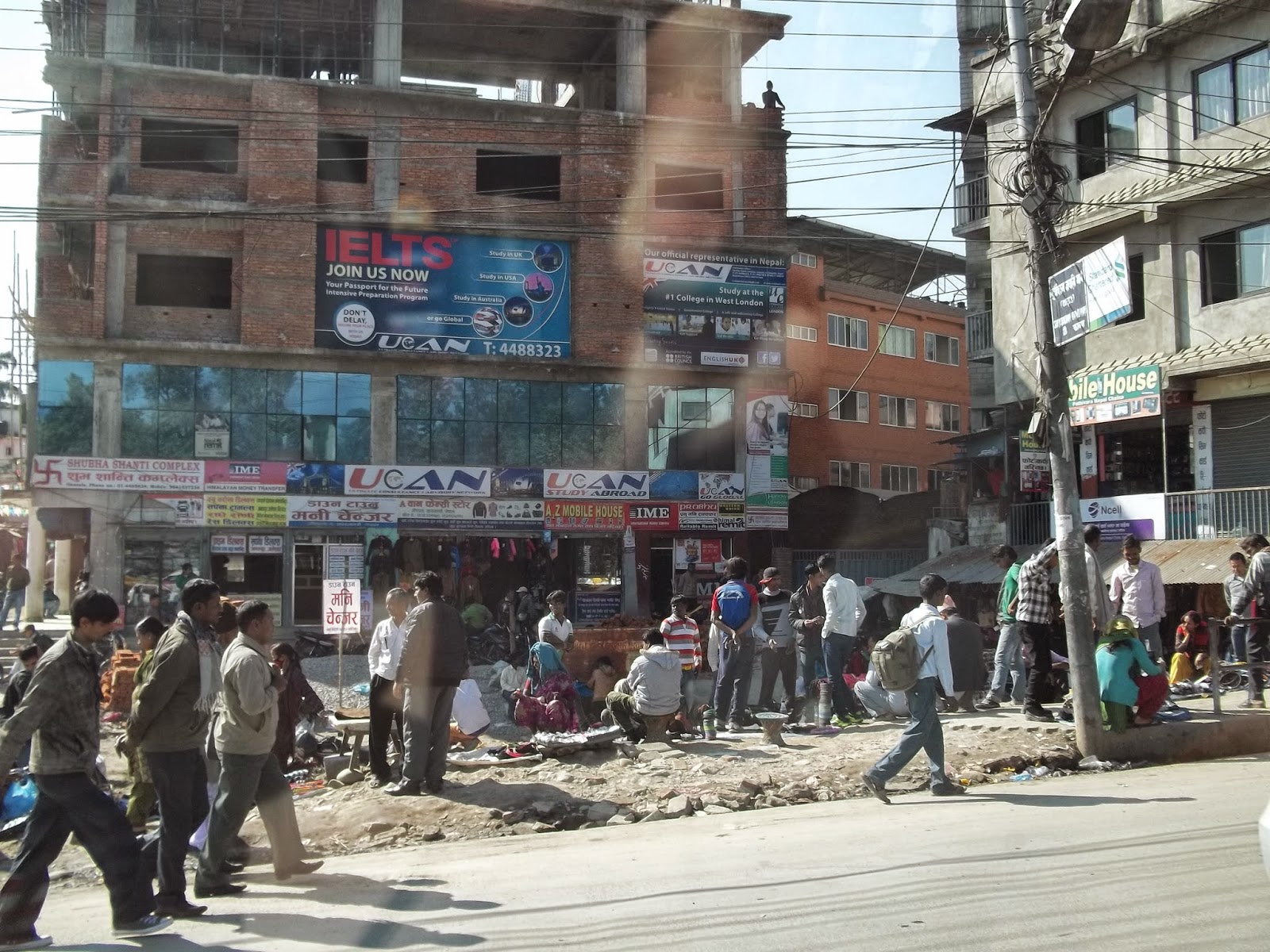 People selling their wares by the side of the road 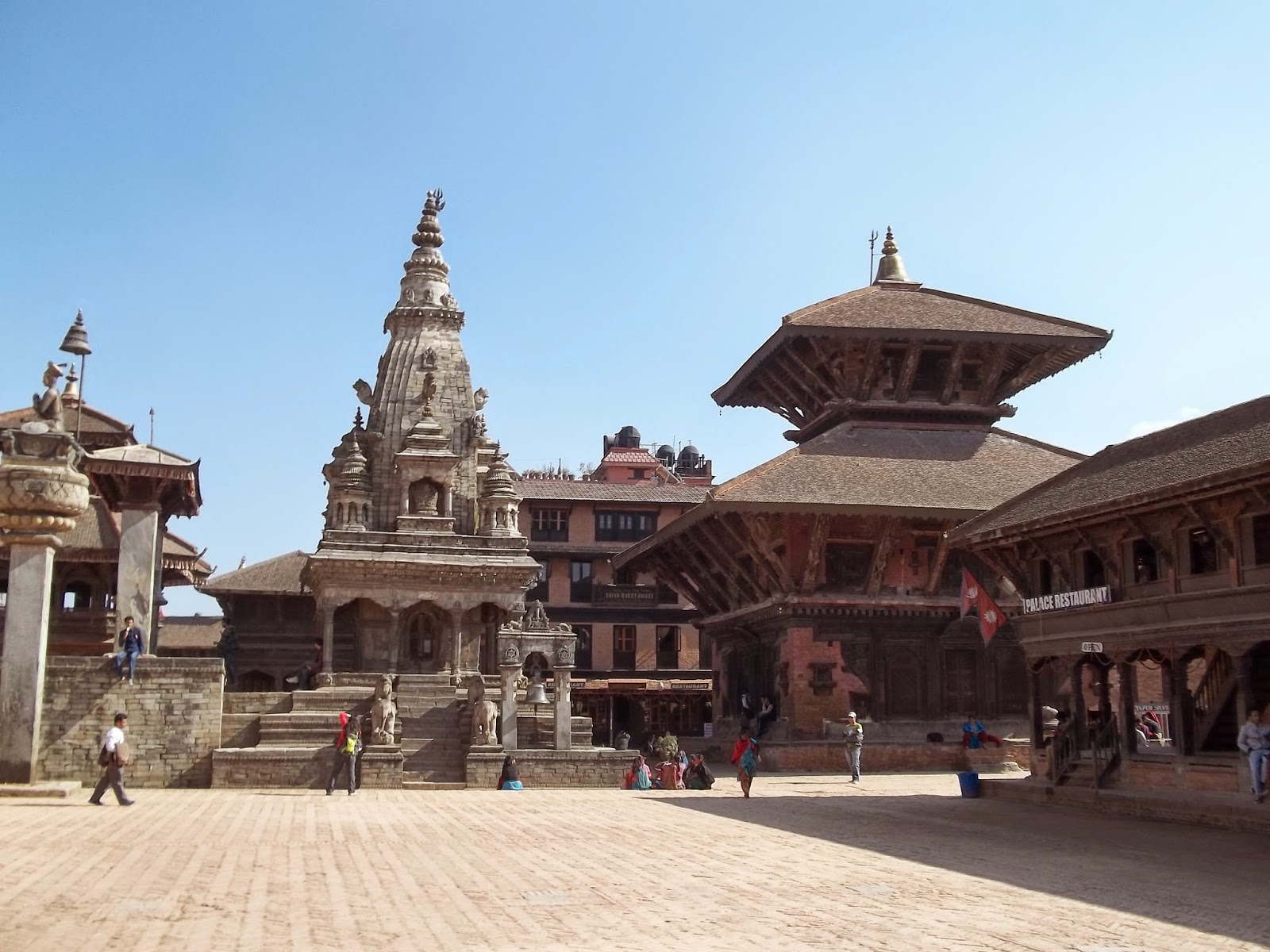 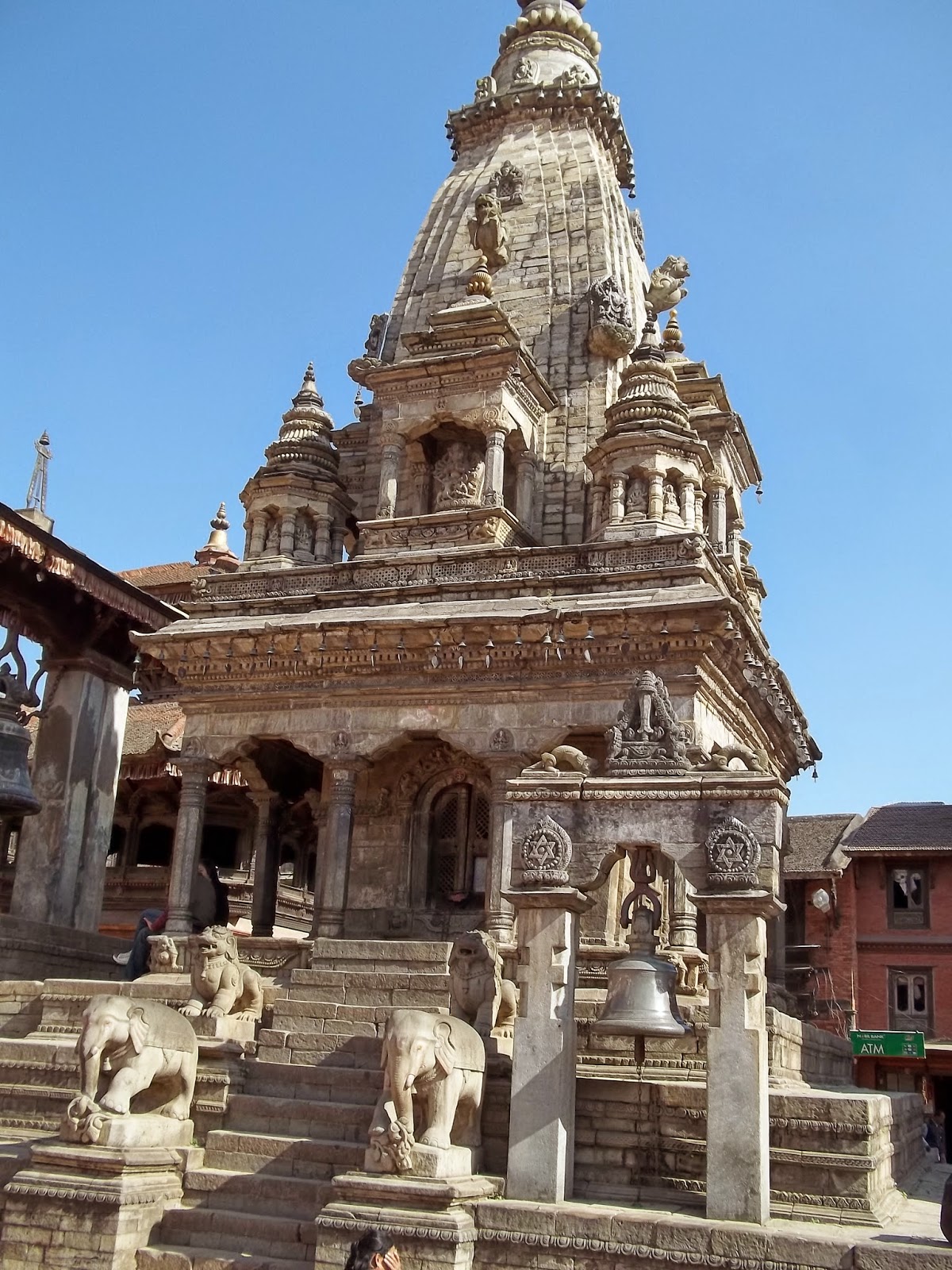 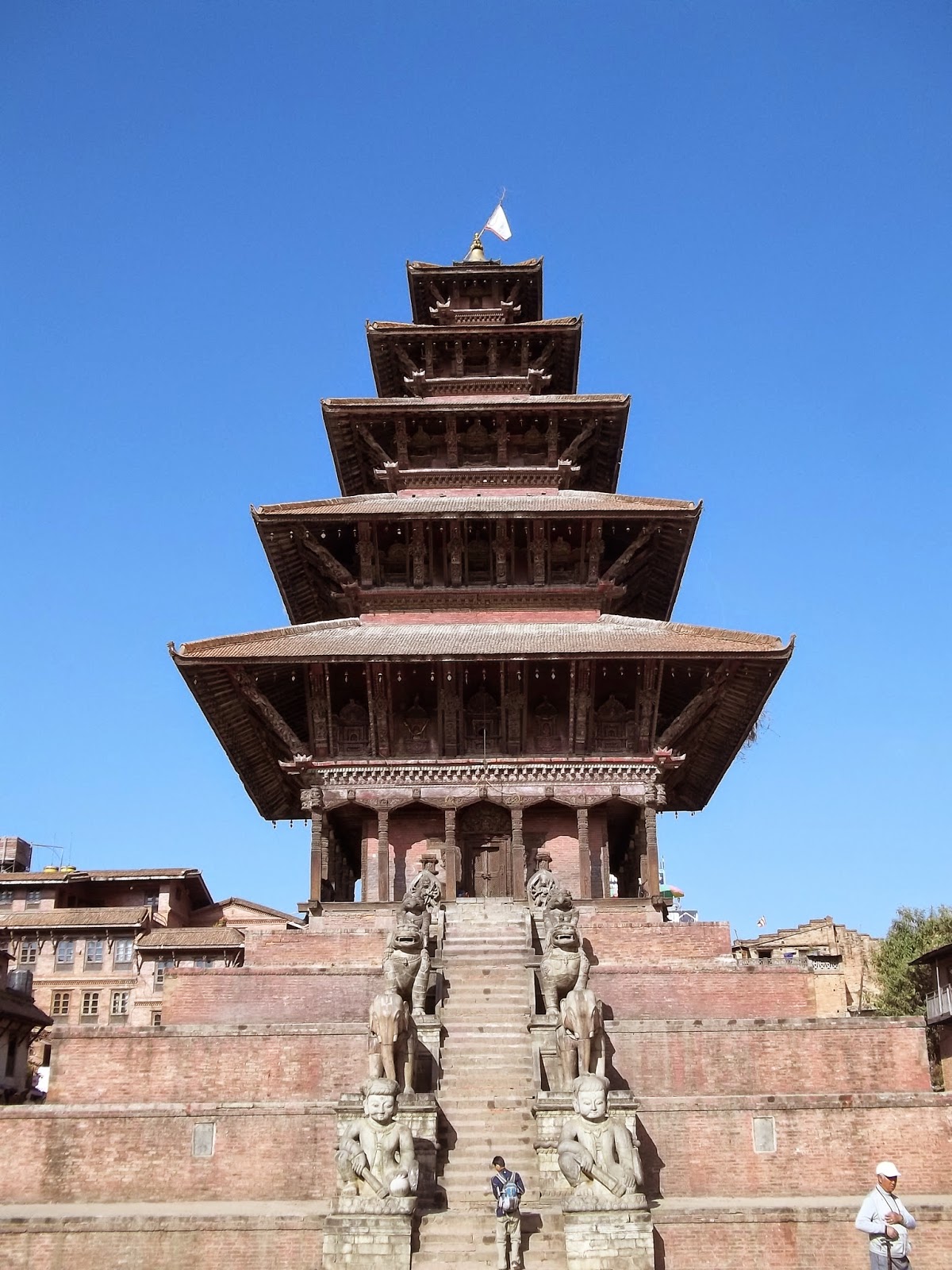 Day 3 was when all the hard work started.  We flew to Pokhara then bussed for an hour to Kande where we had lunch then headed off into the trees for a strenuous uphill trek towards our first overnight stop at "Australian Camp" - 1950 m high.  The views from this place were staggering and we just managed to catch the sunset.  Fantastic!!!  As this part of my account is just the sightseeing bit, I'll post about the actual walking part later in the week. 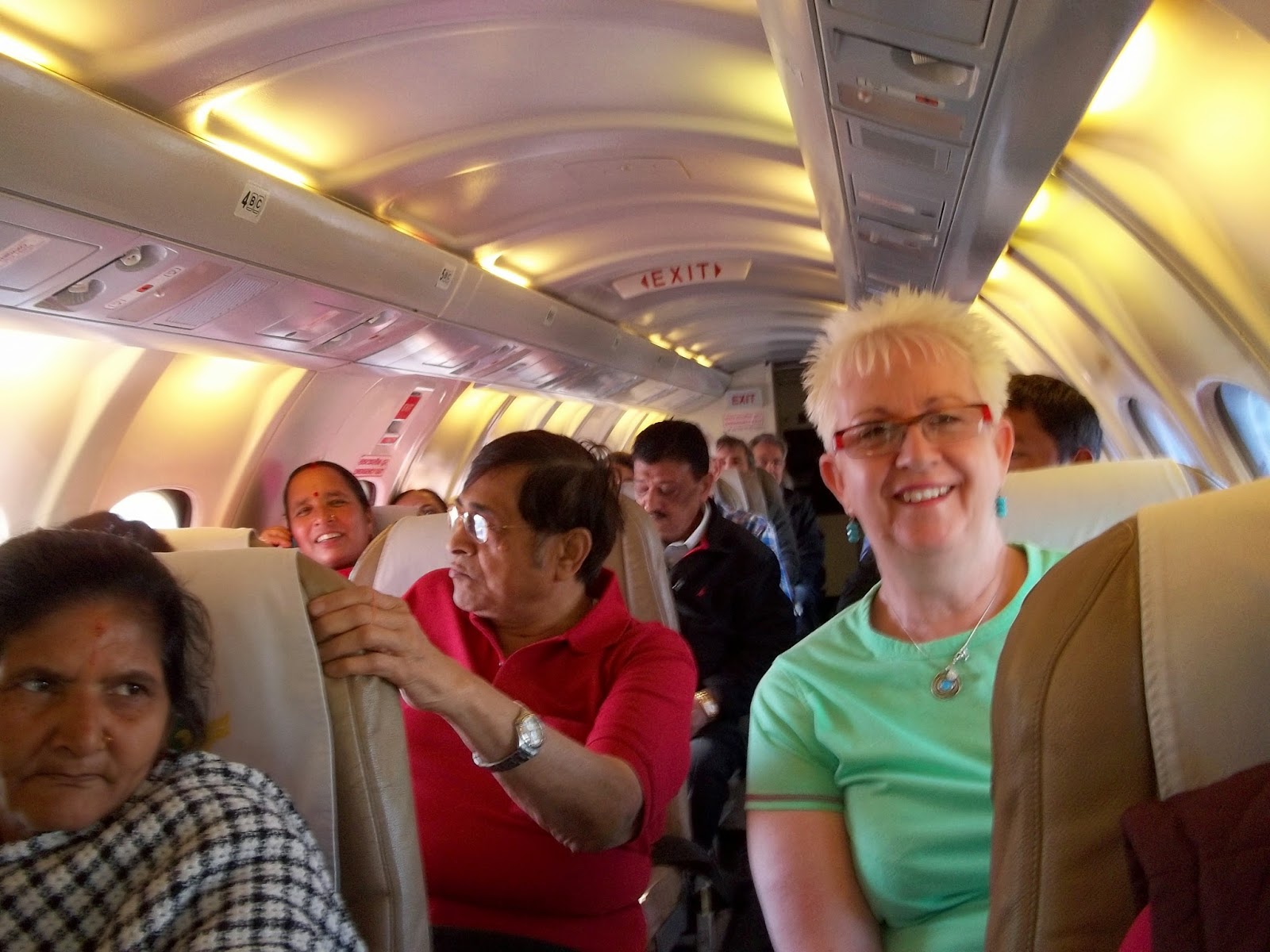 The Hubster is a well travelled man and says this is the smallest plane he's EVER been on! 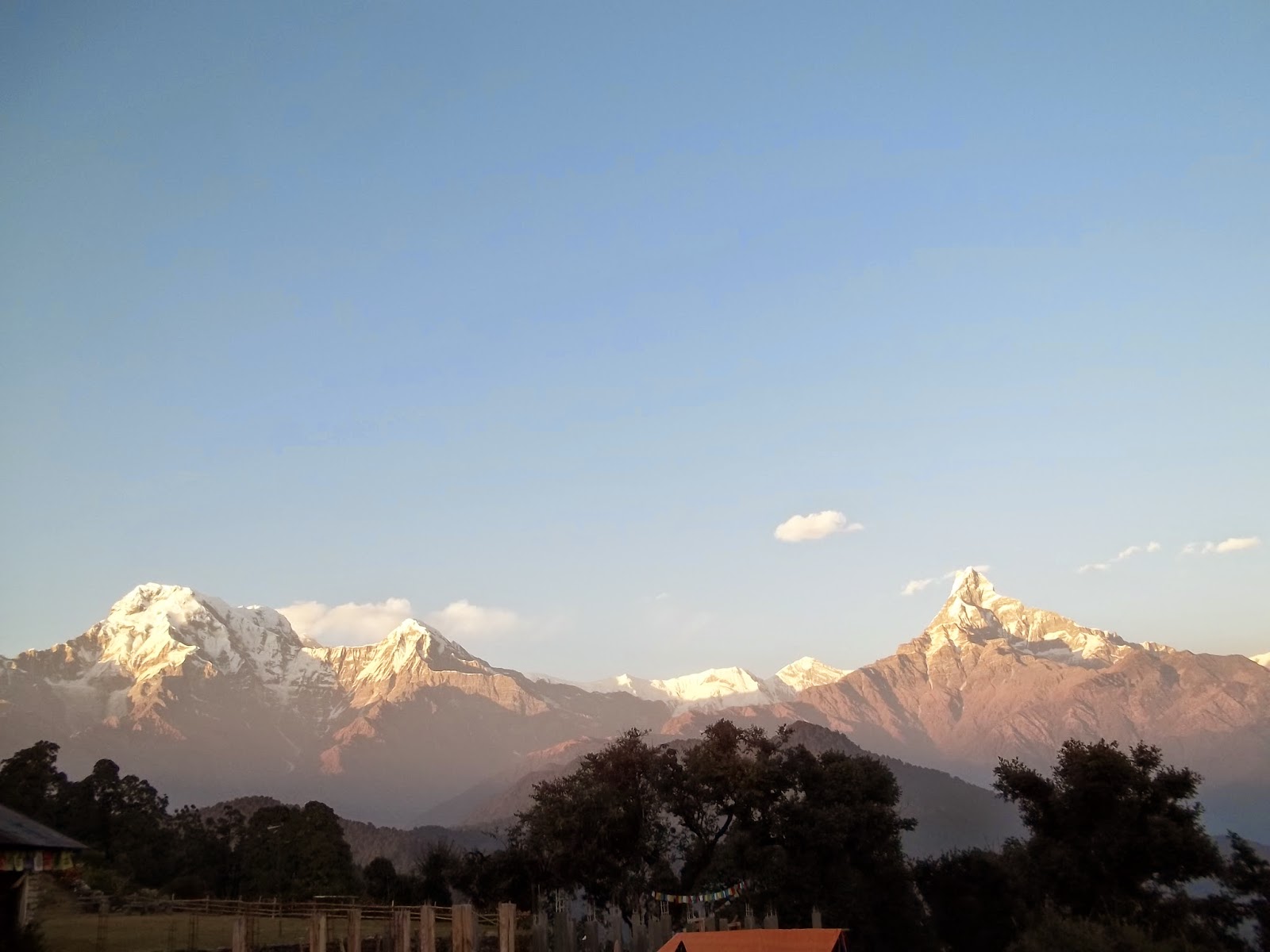 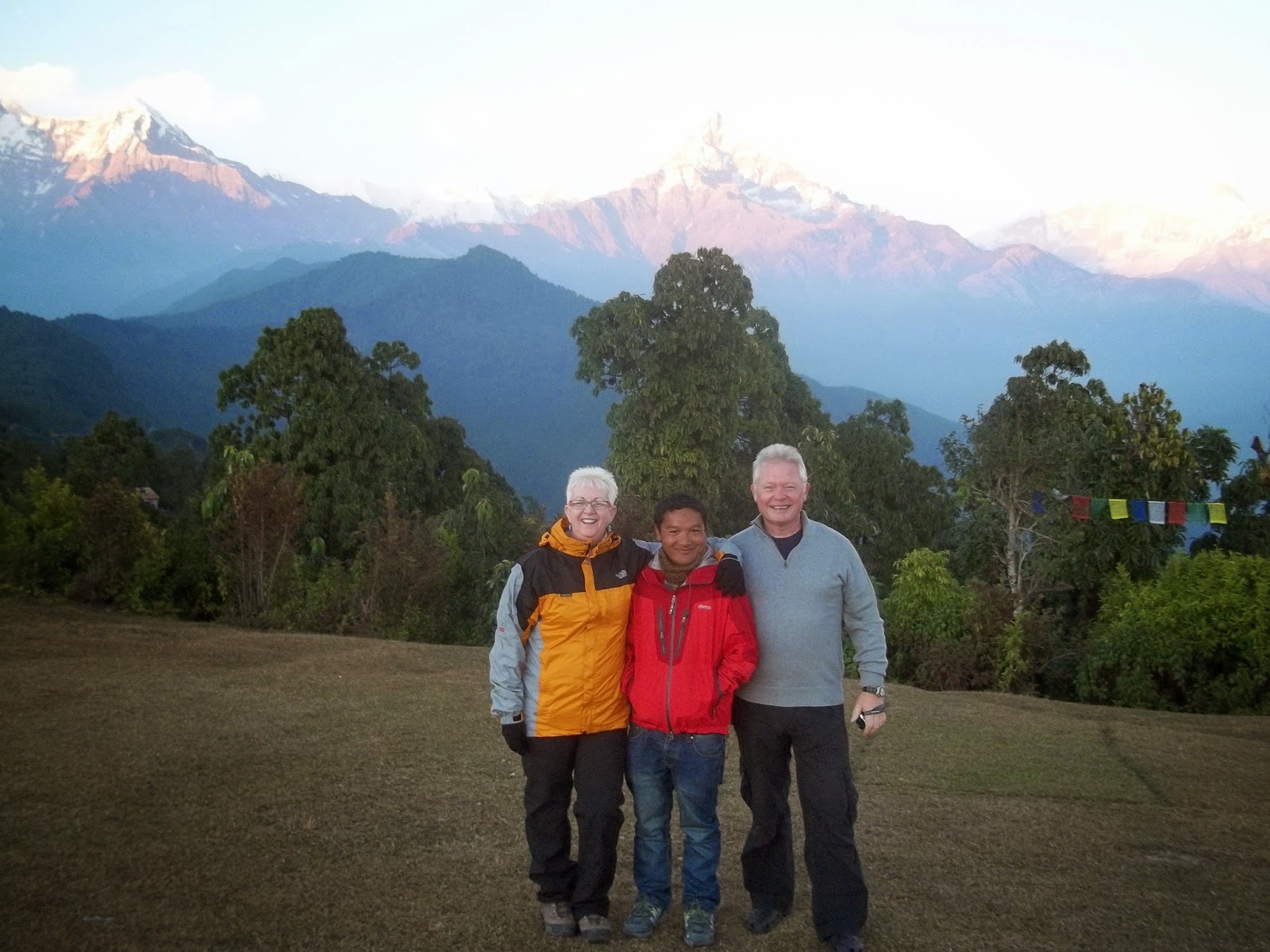 The following six days were all trekking and on the seventh day we got into two clapped out small cars to take us on a three hour hair-raising journey from Tatopani to Beni where then transferred to a mini bus for another two hour journey to Pokhara.  The write up in our itinerary said we would be driving on the "ever improving" jeep road to Beni. I'm not sure exactly which part of the road had been improved but it was bumpier than any road I've ever been on in my life - I'd hate to have been on it before it was improved haha.

Once in Pokhara we had the afternoon free to do what we wanted so we decided to have a leisurely stroll along the Phewa Lake and it was great to be walking on the flat again. 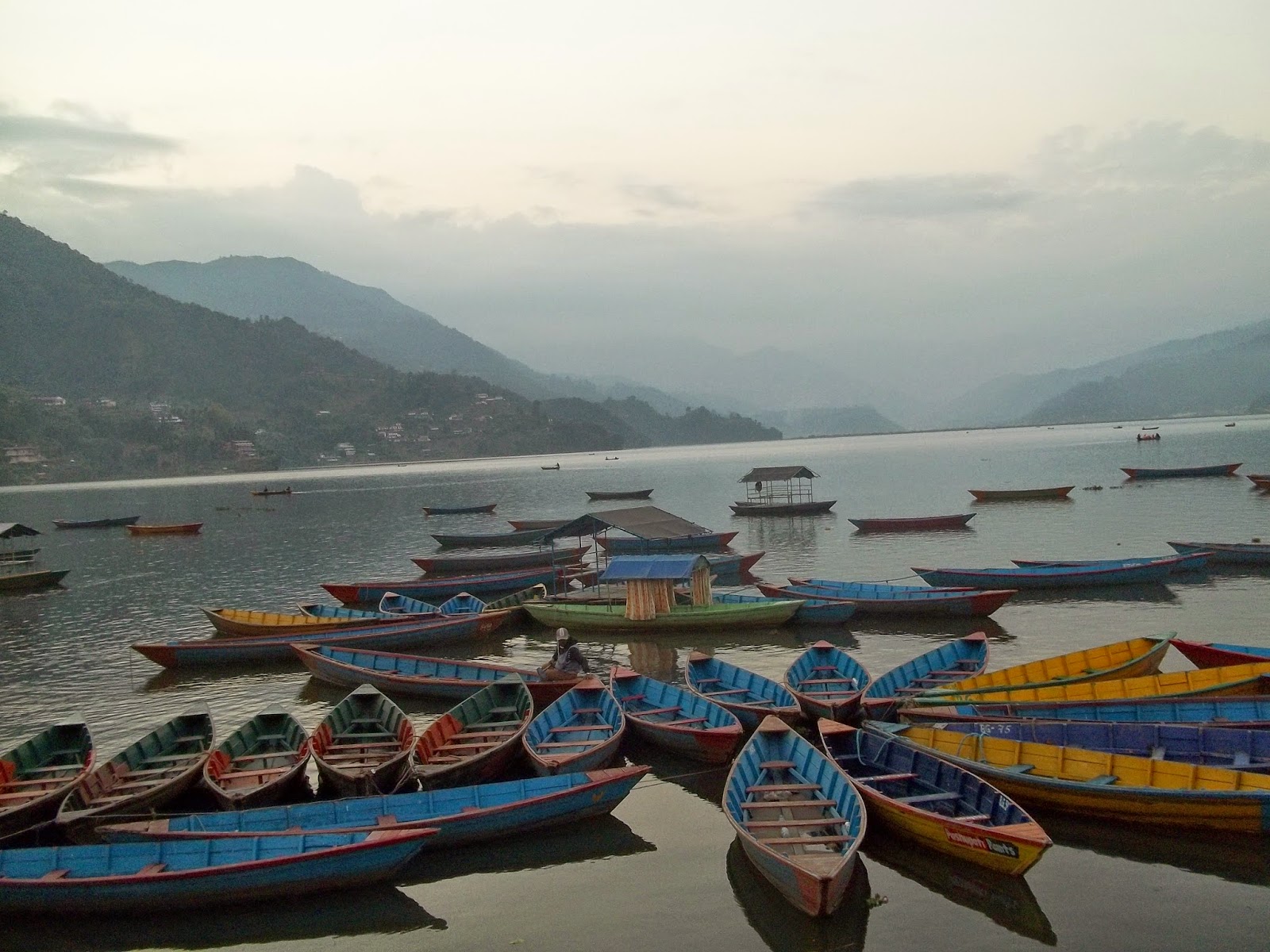 Stunning views from the Lake Phewa 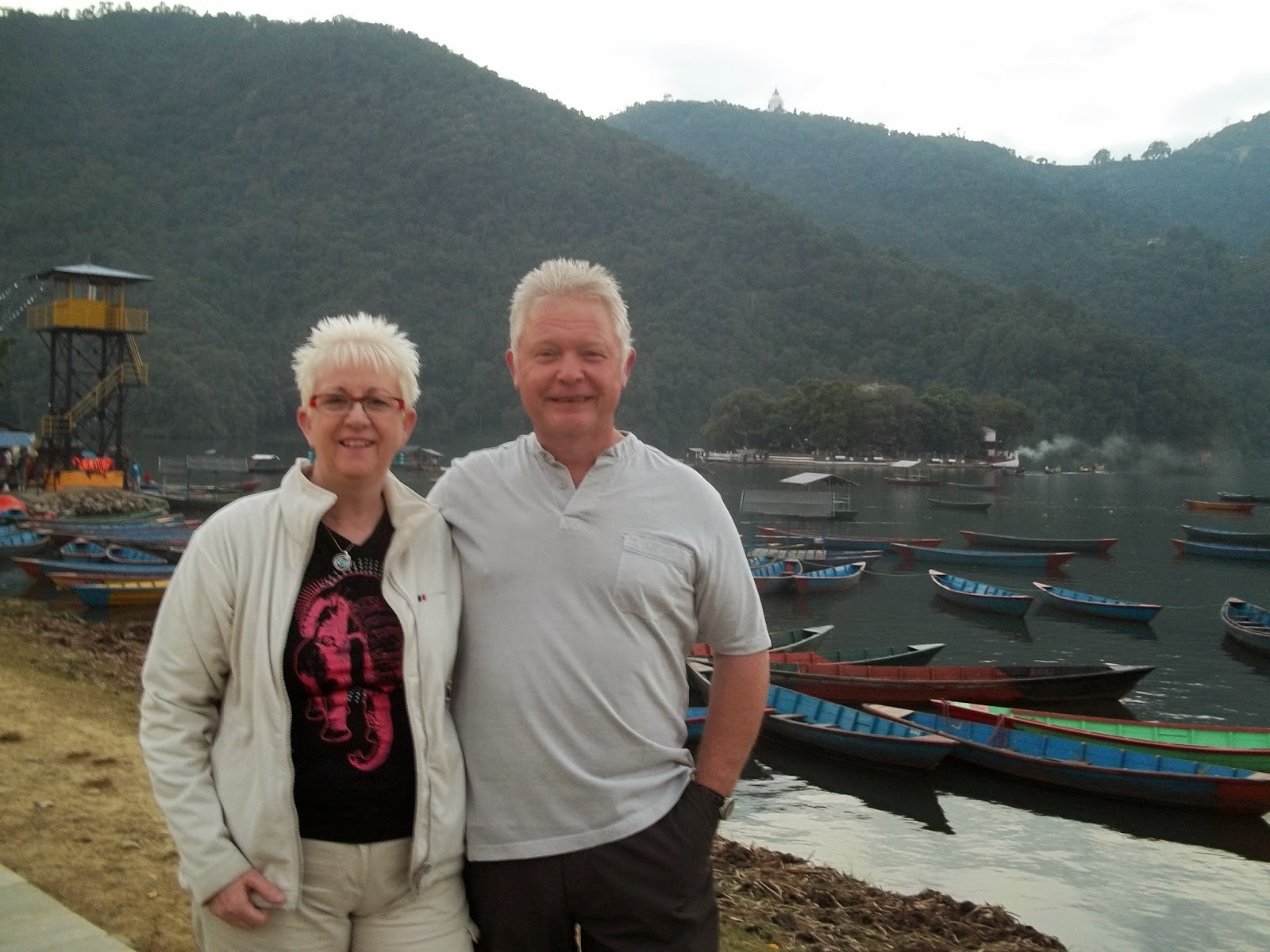 The next day we had an excursion to the mountaineering museum which was a very interesting place to visit.  It gave details of all the over 8,000 m  mountains and showed the types of clothes that have been worn through time by people trying to conquer these giants.  It's amazing that in the beginning when people wanted to climb these mountains they really only wore thick, normal clothes!  No wonder some of them ended up with frost bite! 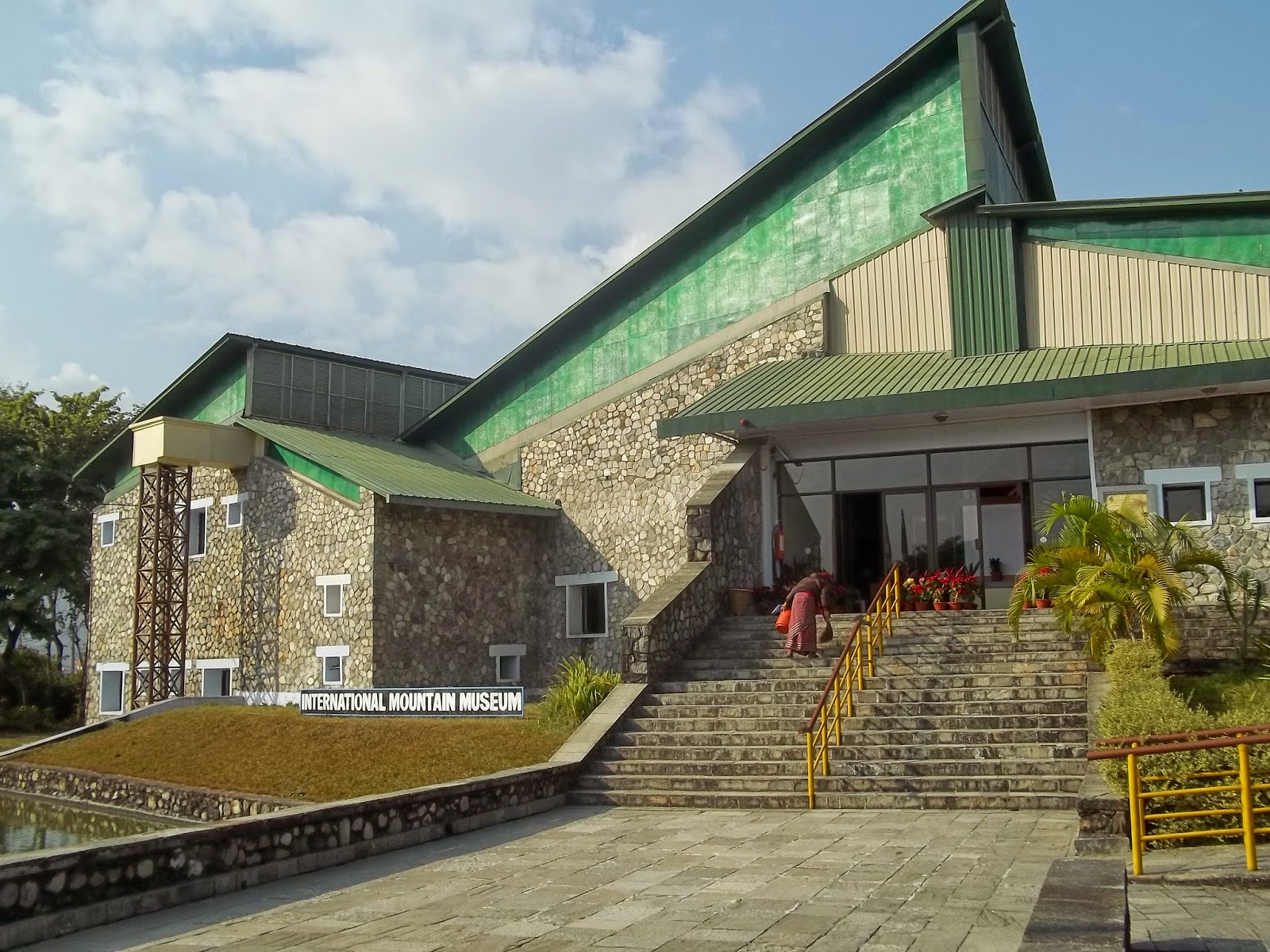 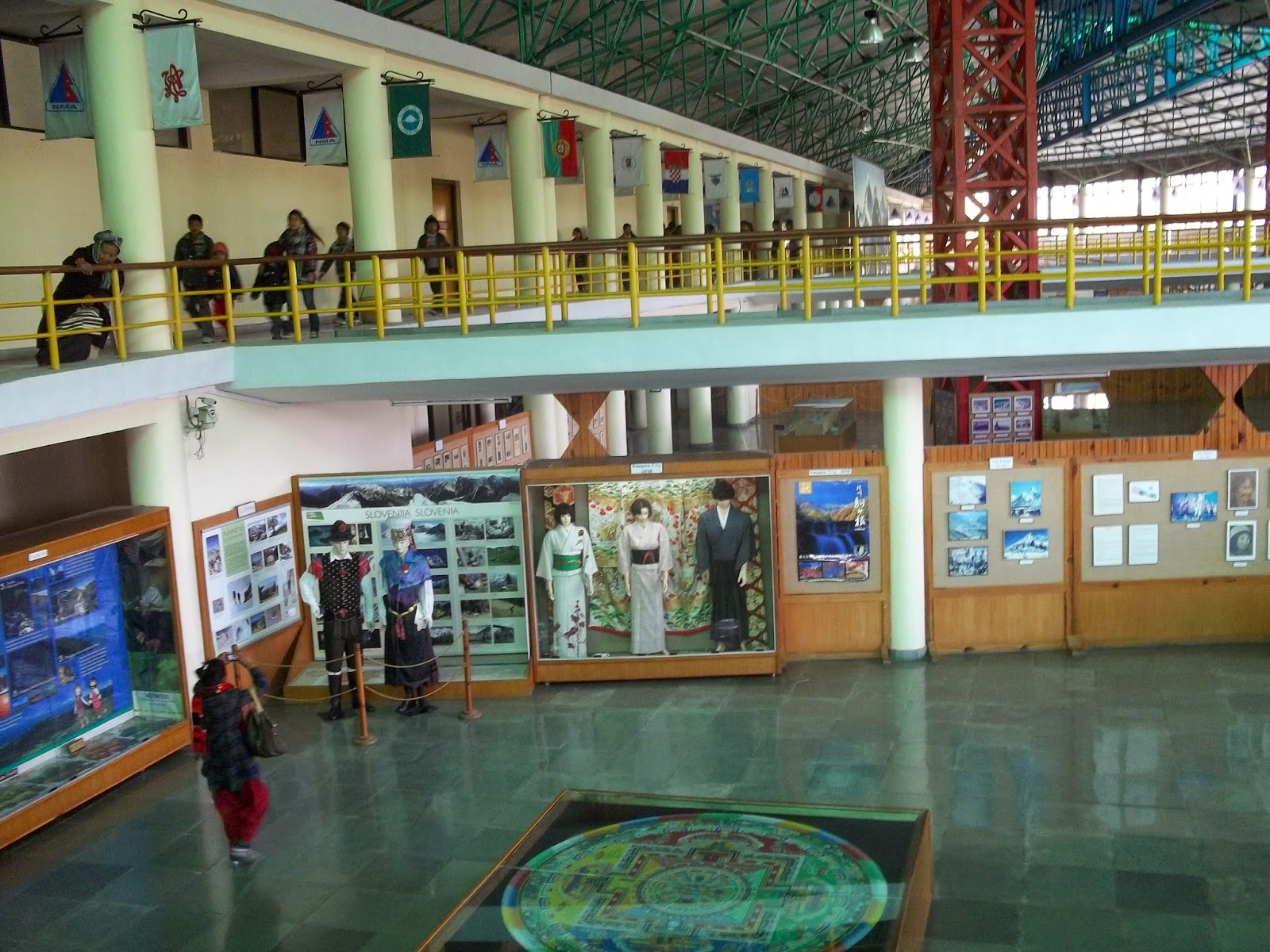 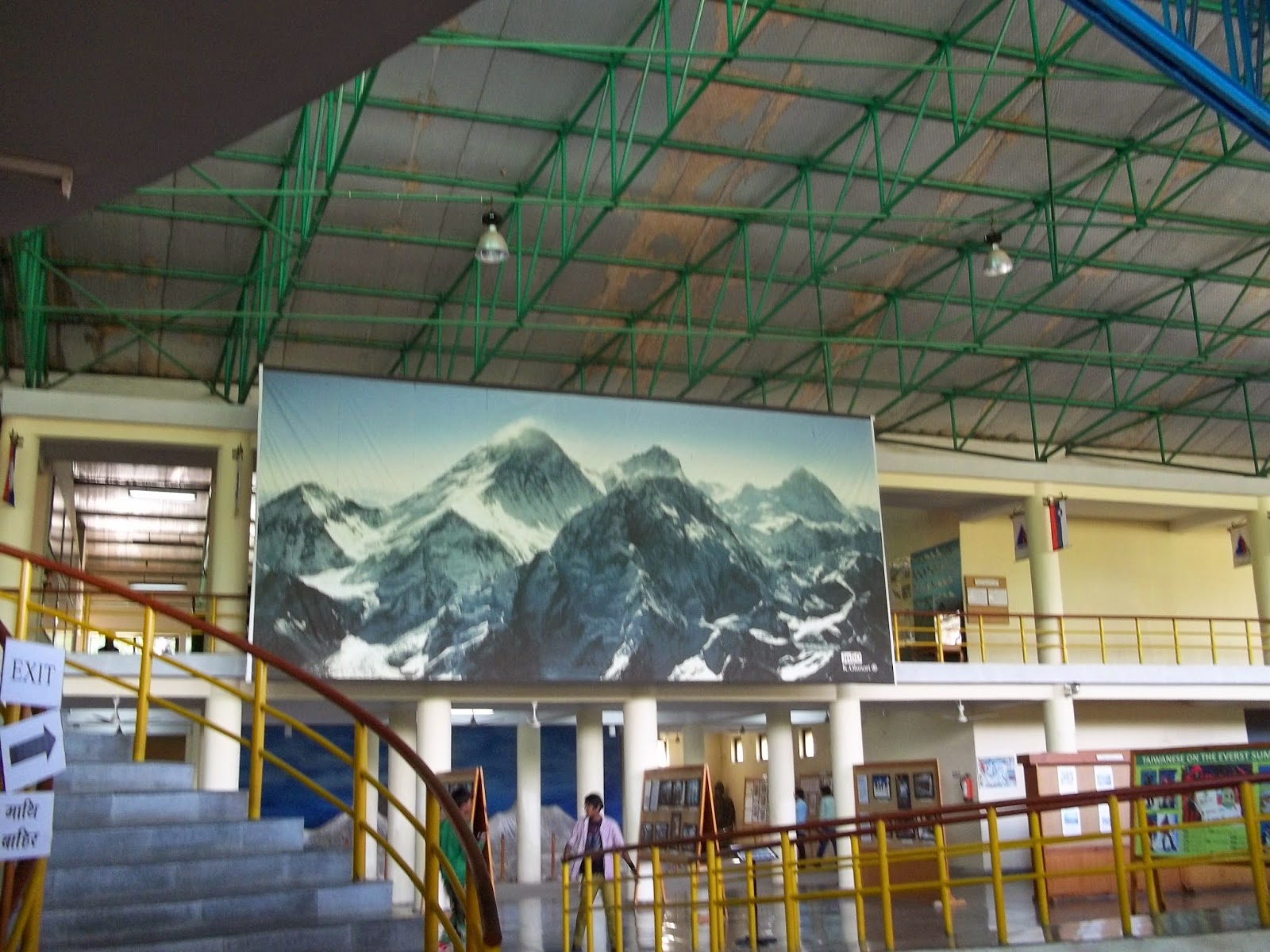 We really enjoyed the visit to Pokhara and were supposed to fly the following day to Chitwan for an Elephant Safari and other excursions but unfortunately, as often happens in the mountains, there was so much fog and low cloud that they closed the airport - after having sat there for 6 hours waiting for news on our flights!  So it was back to Kathmandu which was where we spent our last two nights just resting, sightseeing and enjoying the facilities of the hotel - I indulged in a massage which was the best I've ever had in my life!

Anyhoo, we were due to fly back to good old Blighty on Monday 16 December but due to "technical faults" our flight was delayed by 7 hours, so we sat for another whole day in the airport which then made us later for our connecting flight in Istanbul to Heathrow which meant we would then miss our flight to Newcastle!  All was sorted at Istanbul but it was a pain in the rear end having to stand in a queue of hundreds of people from our flight who were in the same situation as we were, so we could be allocated an overnight hotel!  Needless to say it was all sorted out but by the time we actually got home the following day we were exhausted!

I hope you've enjoyed this sight seeing part of our  trek - I'll post the actual walking bit at a later date so watch this space!