For quite some time now it's been on the cards that my friend Carol would take me for a walk in the College Valley, a place in Northumberland that is stunning and heart-lifting, and that day was Monday 20 April. Please click on the link above to find out more about the fascinating history of the area - it's amazing!

With boots and rucksack packed in the car, Carol and I set off with our trusty hounds - Heidi and Phoebe. The journey from home to the College Valley is quite a long one and should have taken about 1½ hours but unfortunately on the way, while I was driving, I started to have a migraine! Not good!! We pulled over at the Catspaw picnic area and I sat with my head in my hands trying to will the "flashy lights" away and after about 20 minutes they subsided but as usually happens after I get a migraine, I was ravenous. Fortunately for me there was a burger van in the picnic area so I bought a bacon buttie which really did hit the spot. We set off again and I was quite mesmerised at the views as we travelled along the track in the valley past North Blackhaggs to the parking place at Mounthooley Youth Hostel which was as far as it was possible to drive a car. 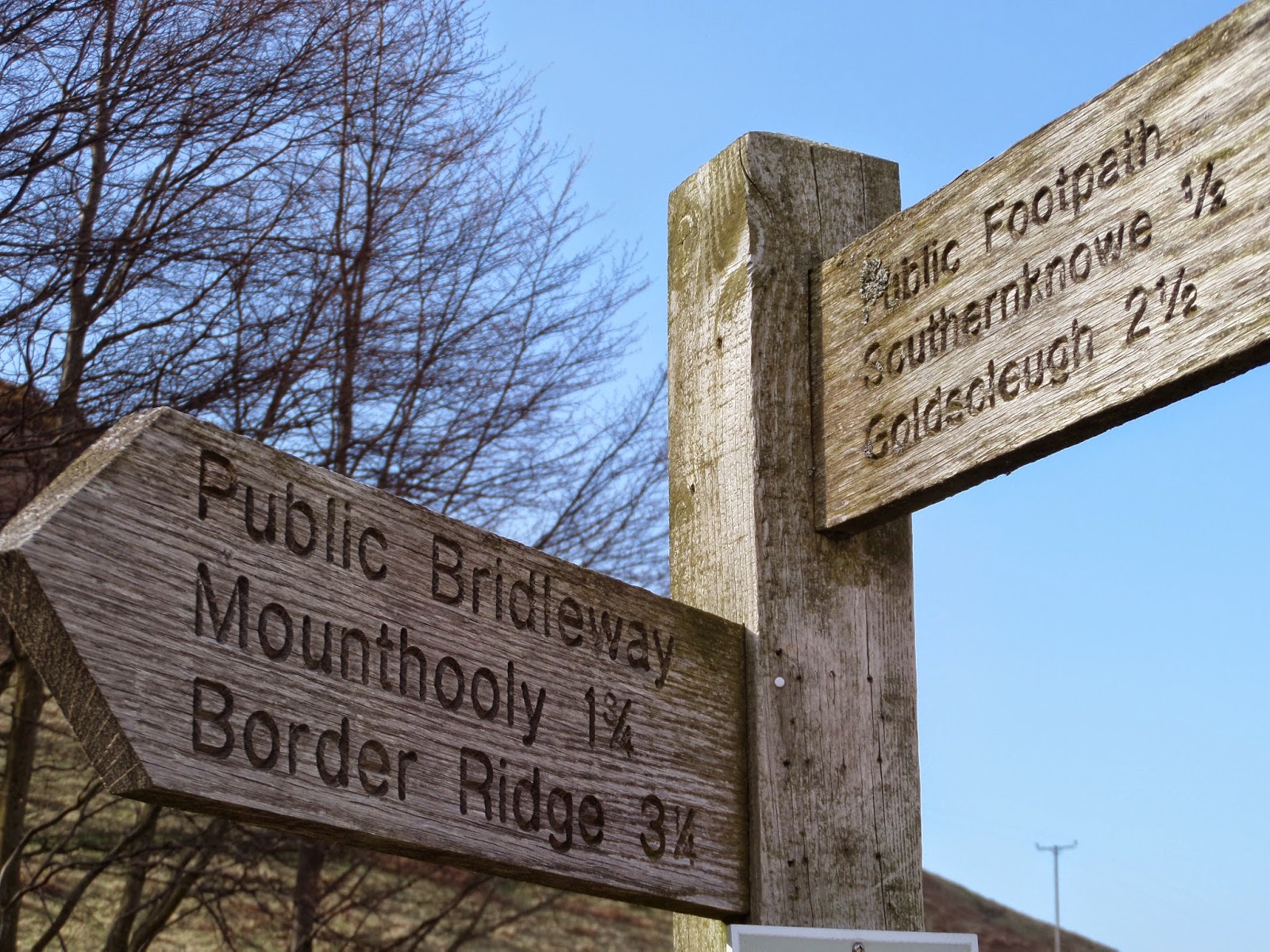 Border Ridge, here we come
Anyone wanting to walk here has to buy a permit from the Smith's Gore office in Wooler before arriving in the valley as they limit the number of cars allowed in the valley to protect the environment which can't be a bad thing. 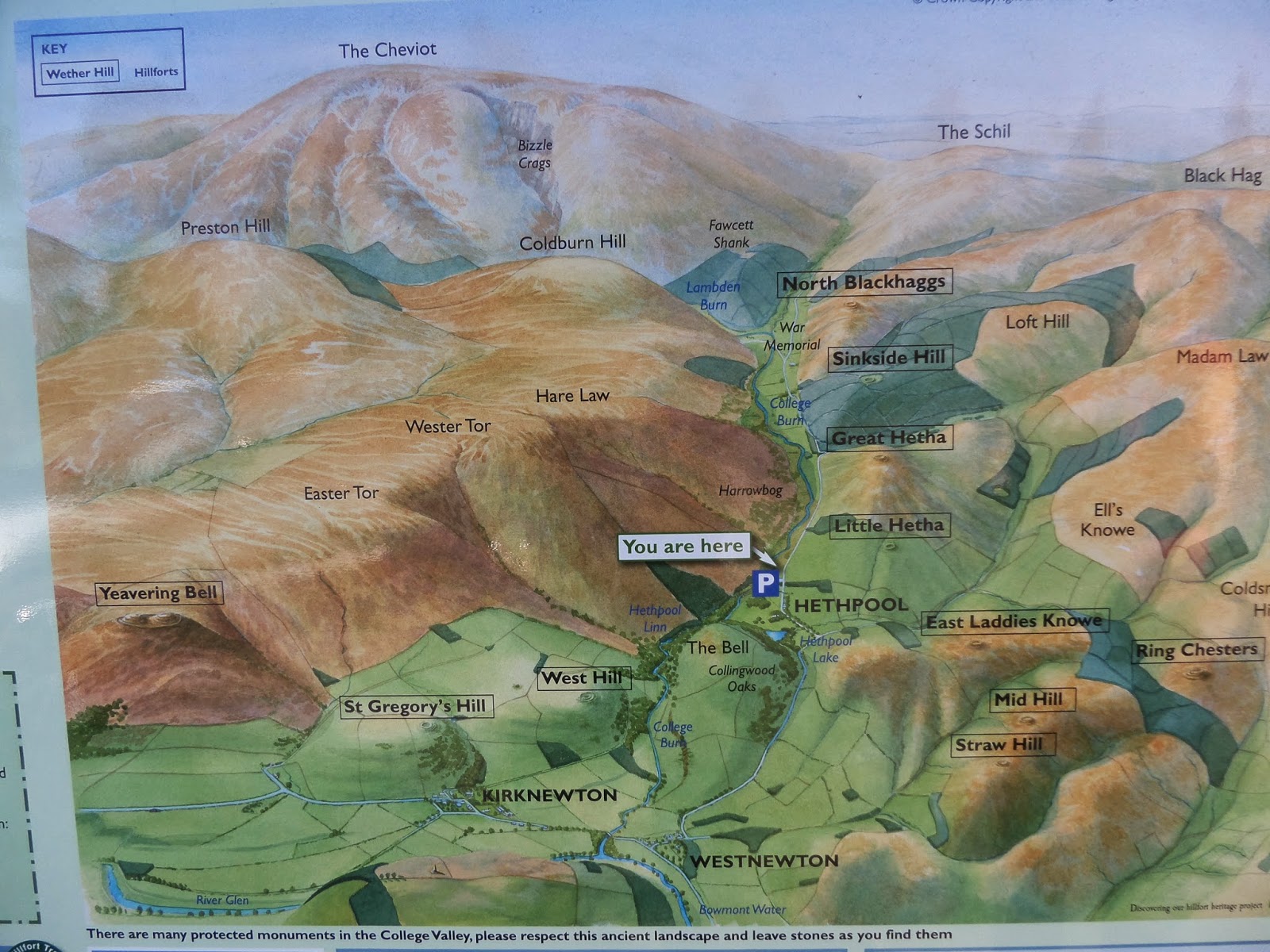 As happens at this time of year, we couldn't decide what to wear because the sun was out but the wind was quite biting so we both layered up but thankfully needed to disrobe as we walked because the sun just warmed us more and more and at times became grateful for the breeze.

The tracks up to the border ridge, which is part of the Pennine Way, were very dry and easy to walk on which made it a very pleasant walk. The tracks parallel to the border ridge weren't quite so dry in parts but we were so glad that there had been a spell of very dry weather lately, otherwise the tales of people getting stuck in the boggy bits of the Pennine Way might just have become a reality!    We decided once we got to the ridge we would track left to the refuge hut and have our lunch while admiring the fabulous views that surrounded us then back-track slightly towards the Schil.  Below are some of the views we had on this part of the journey. 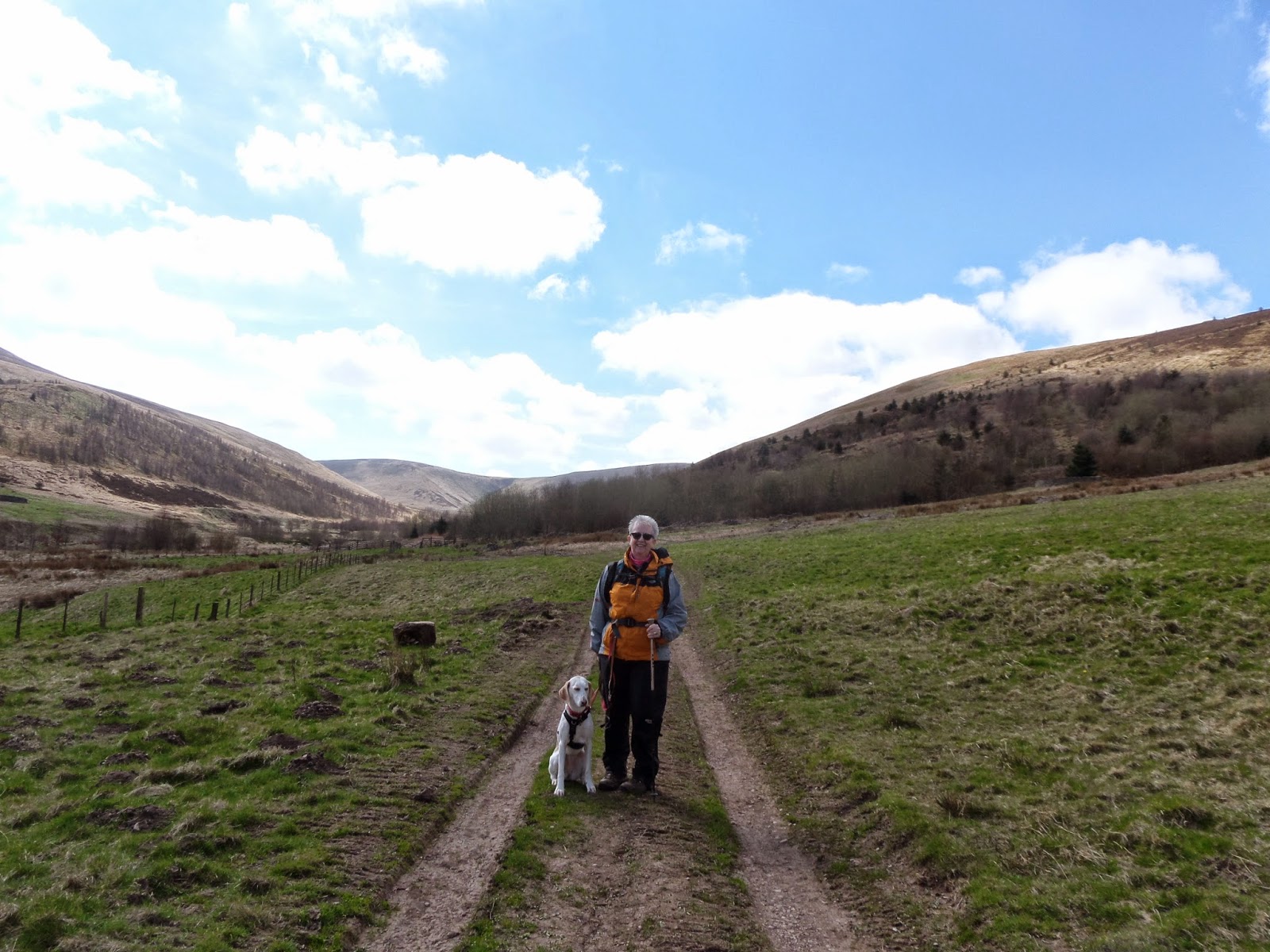 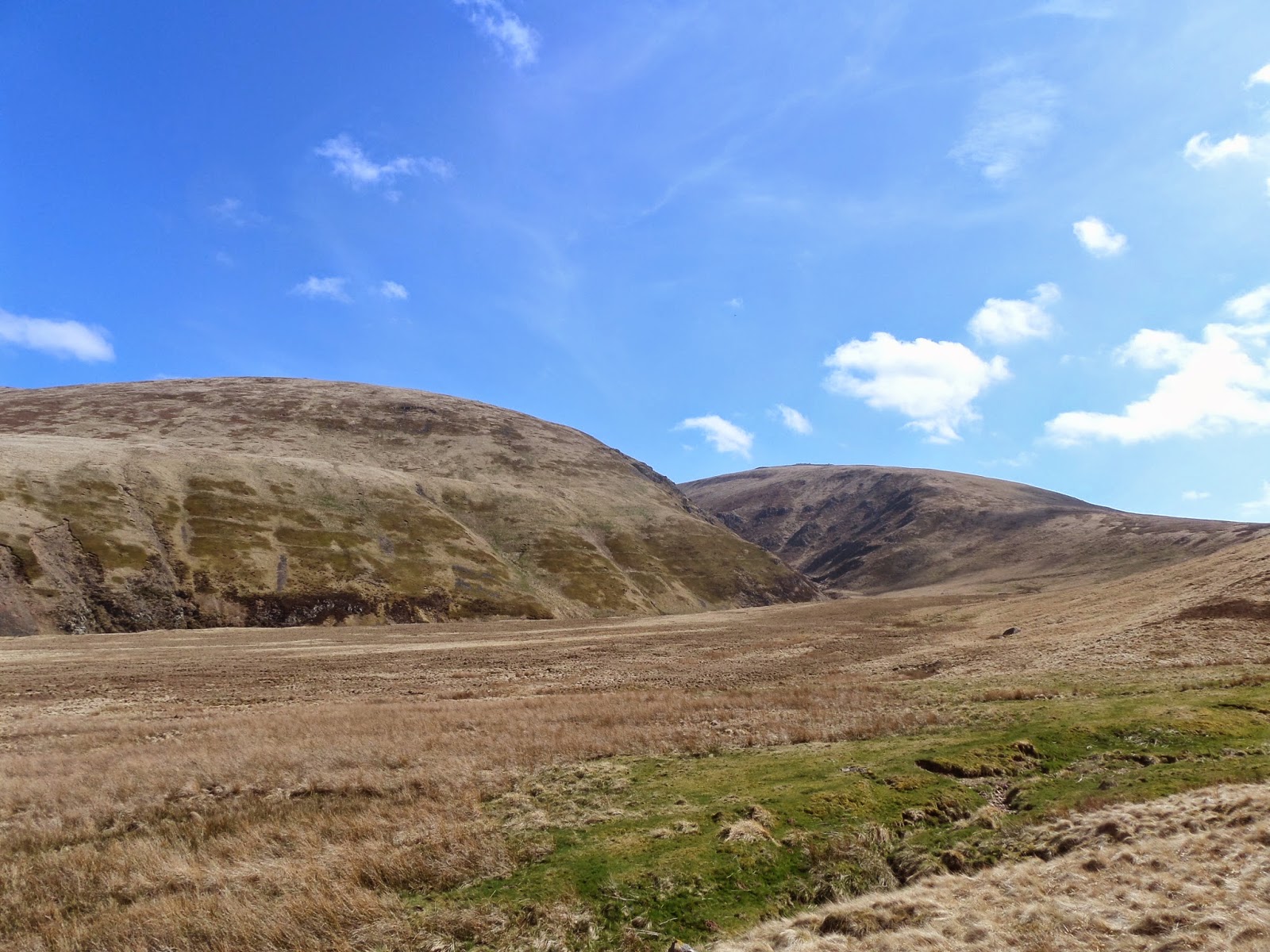 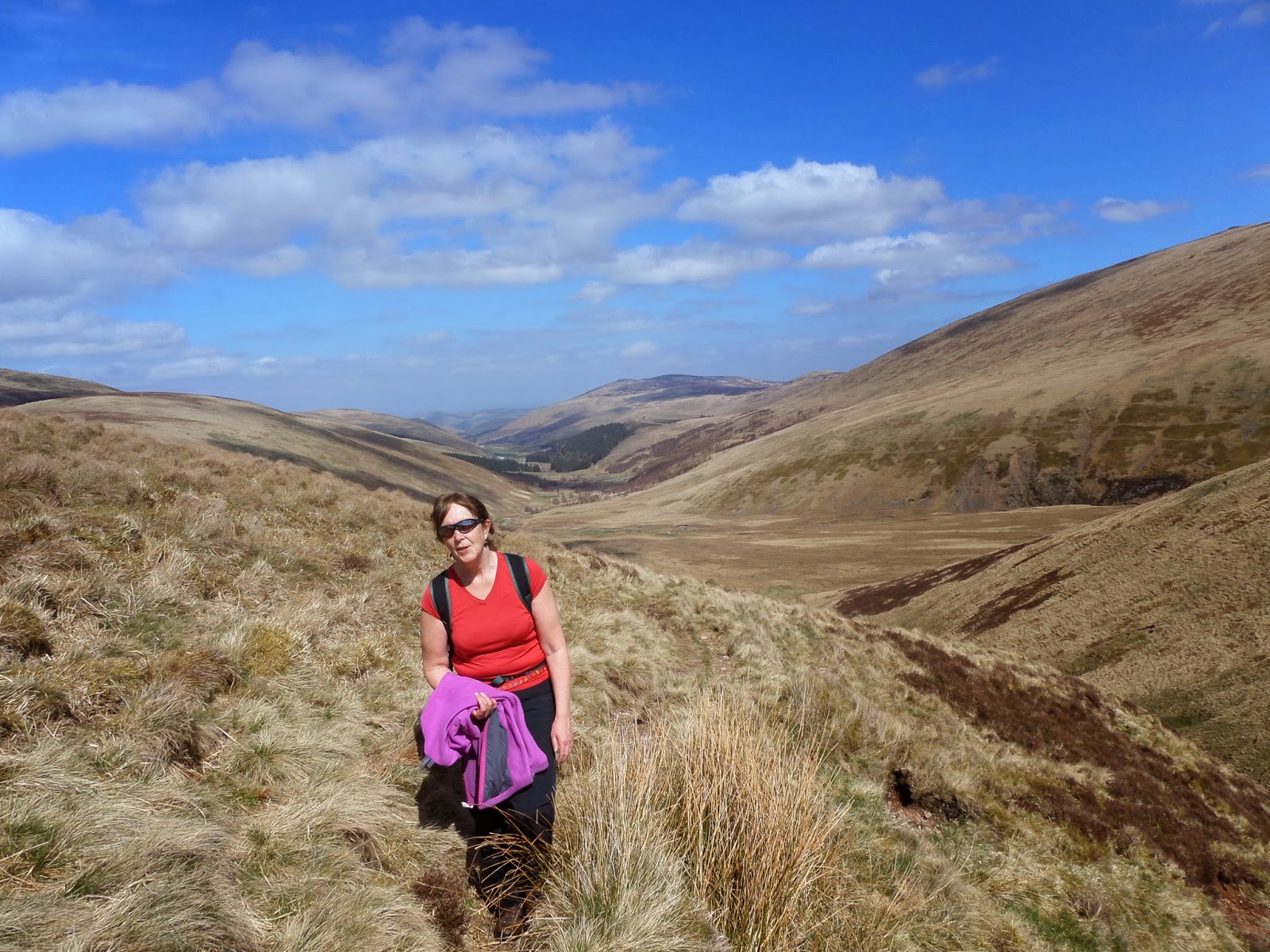 Yep, it sure is getting a bit warm now 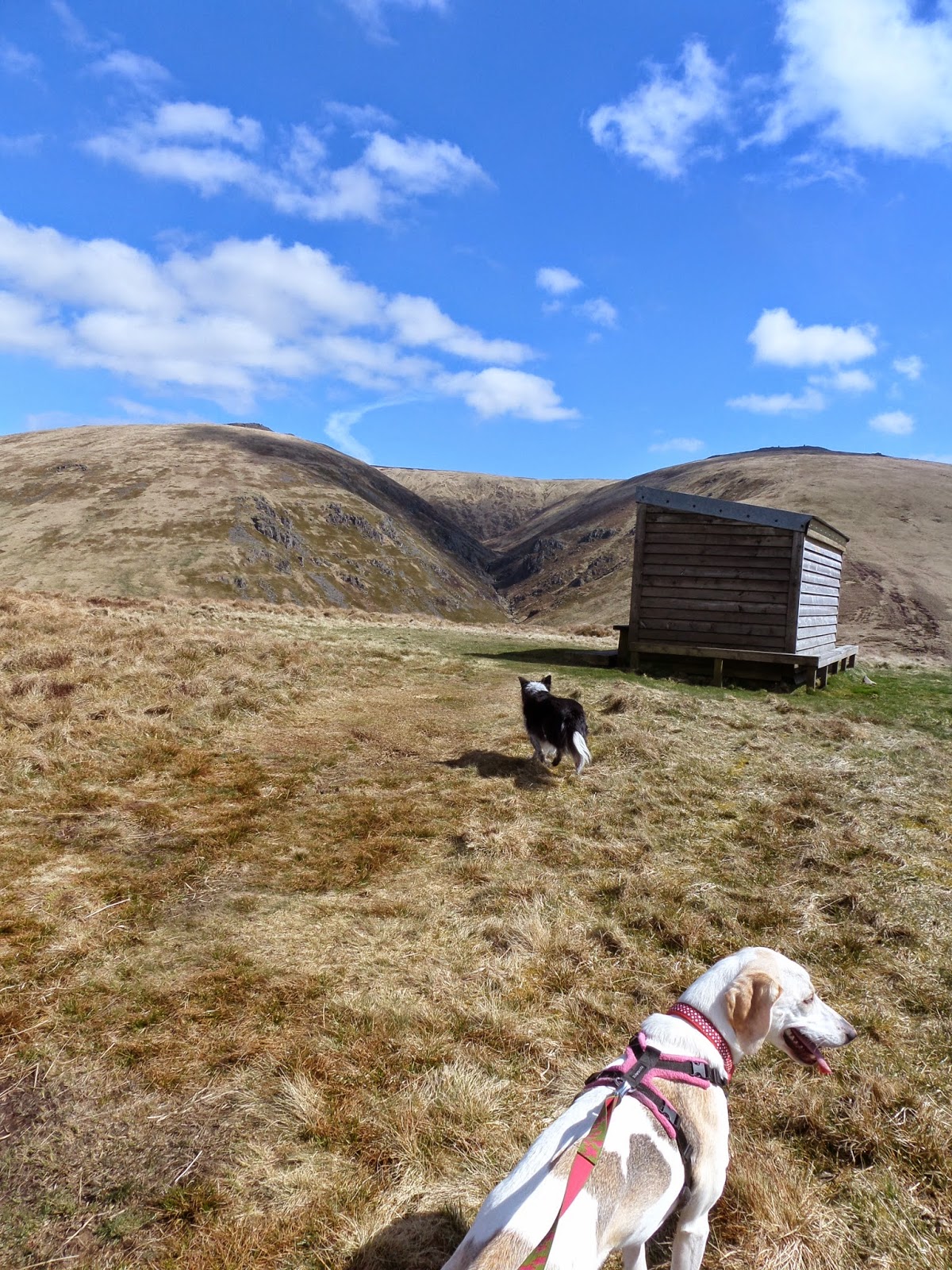 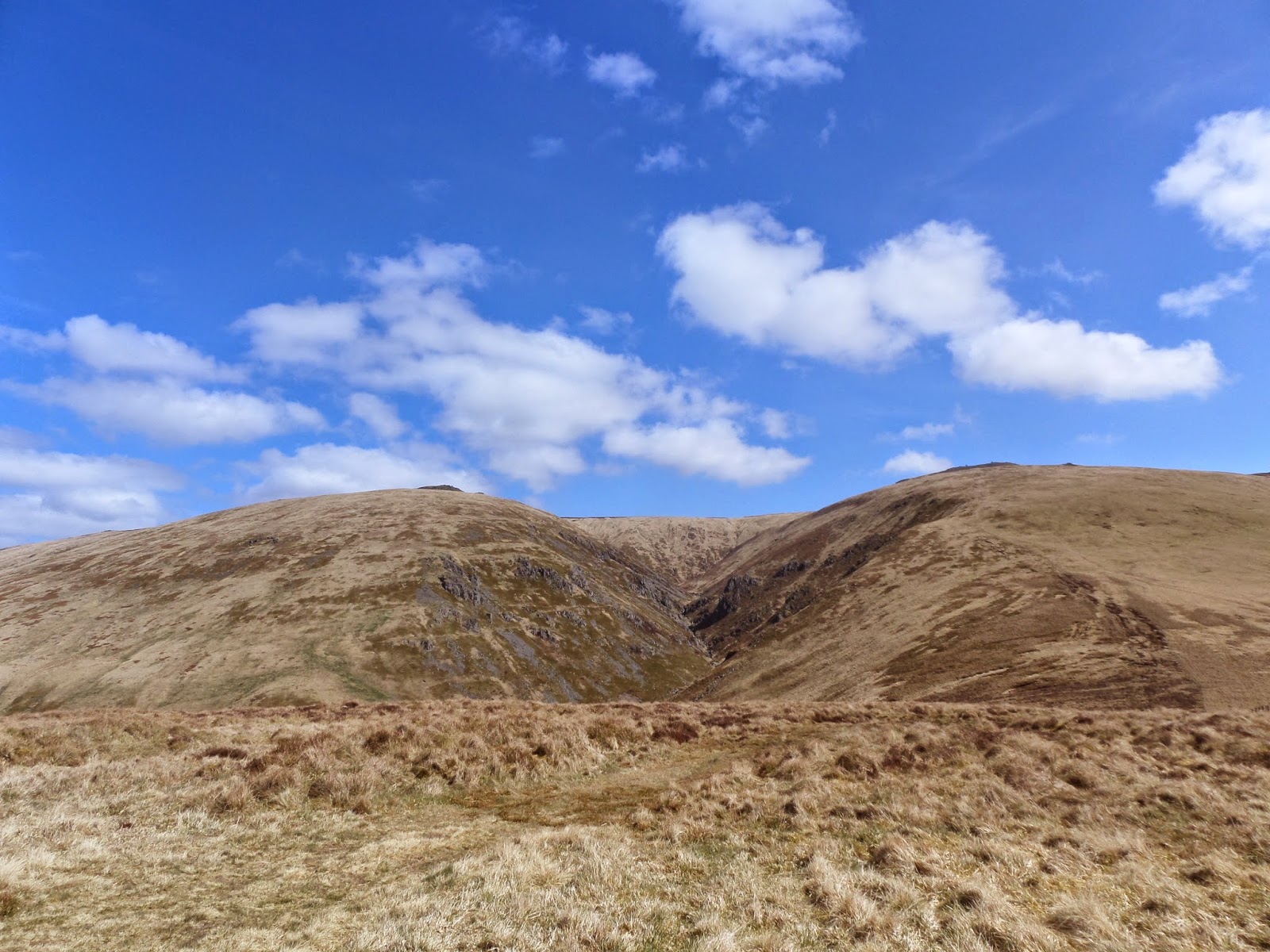 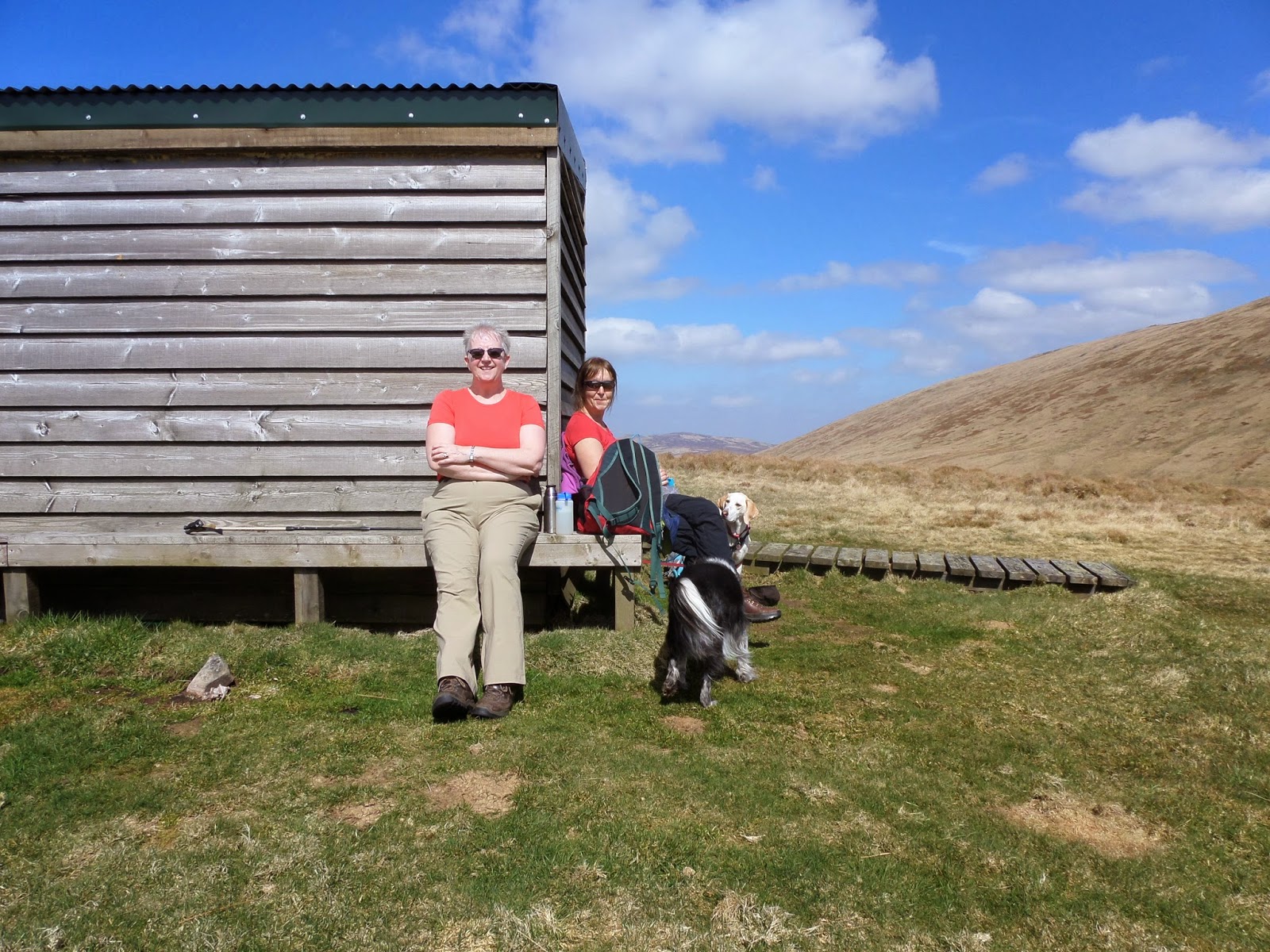 Don't think there's anywhere else I would rather be to eat my lunch! 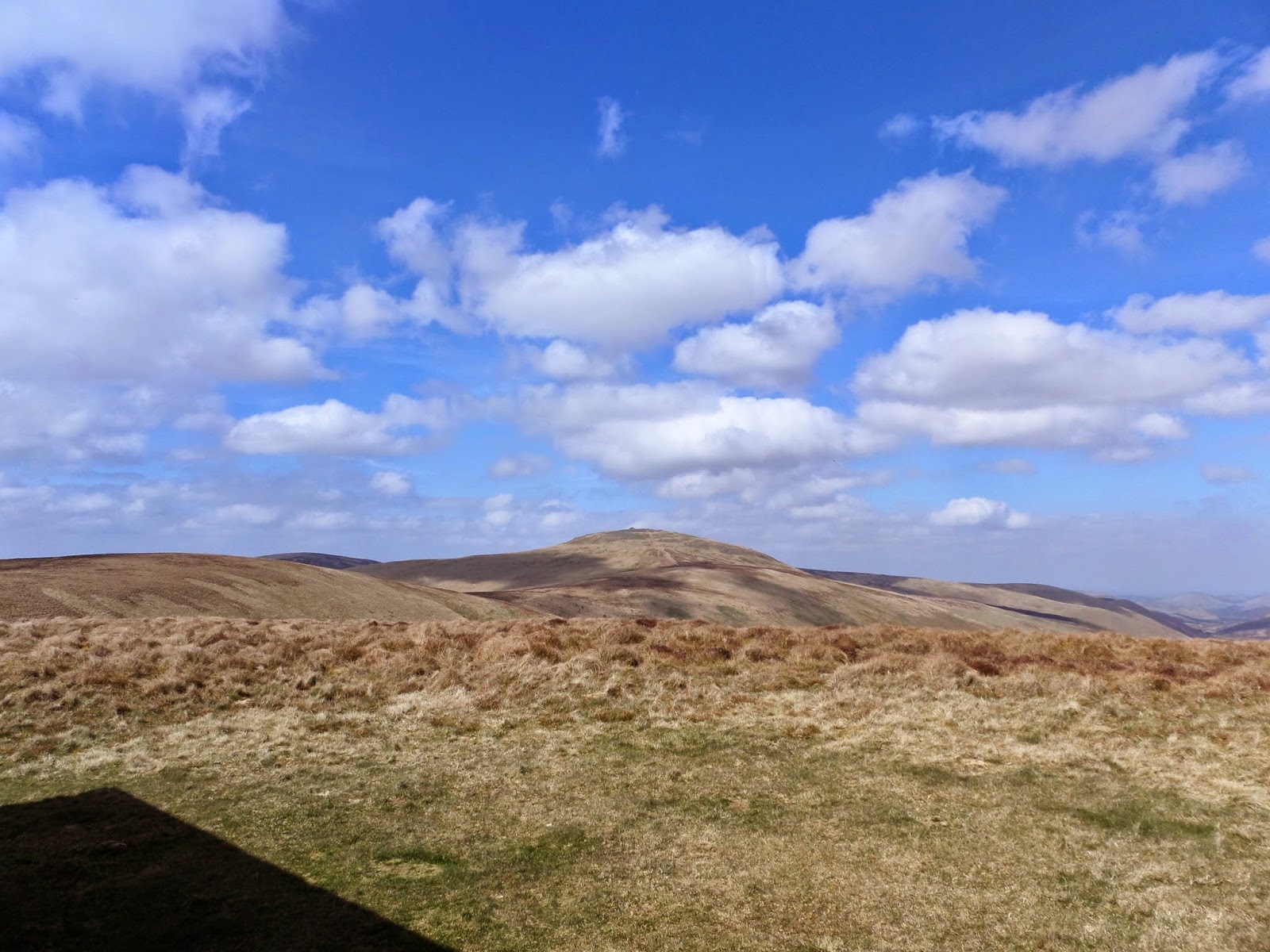 After our lunch we did an about turn and headed towards the Schil which was our main destination.  This part of the walk followed the border fence separating England from Scotland and was quite boggy in part but as previously mentioned probably not anywhere near as bad as it could have been if it had rained recently. 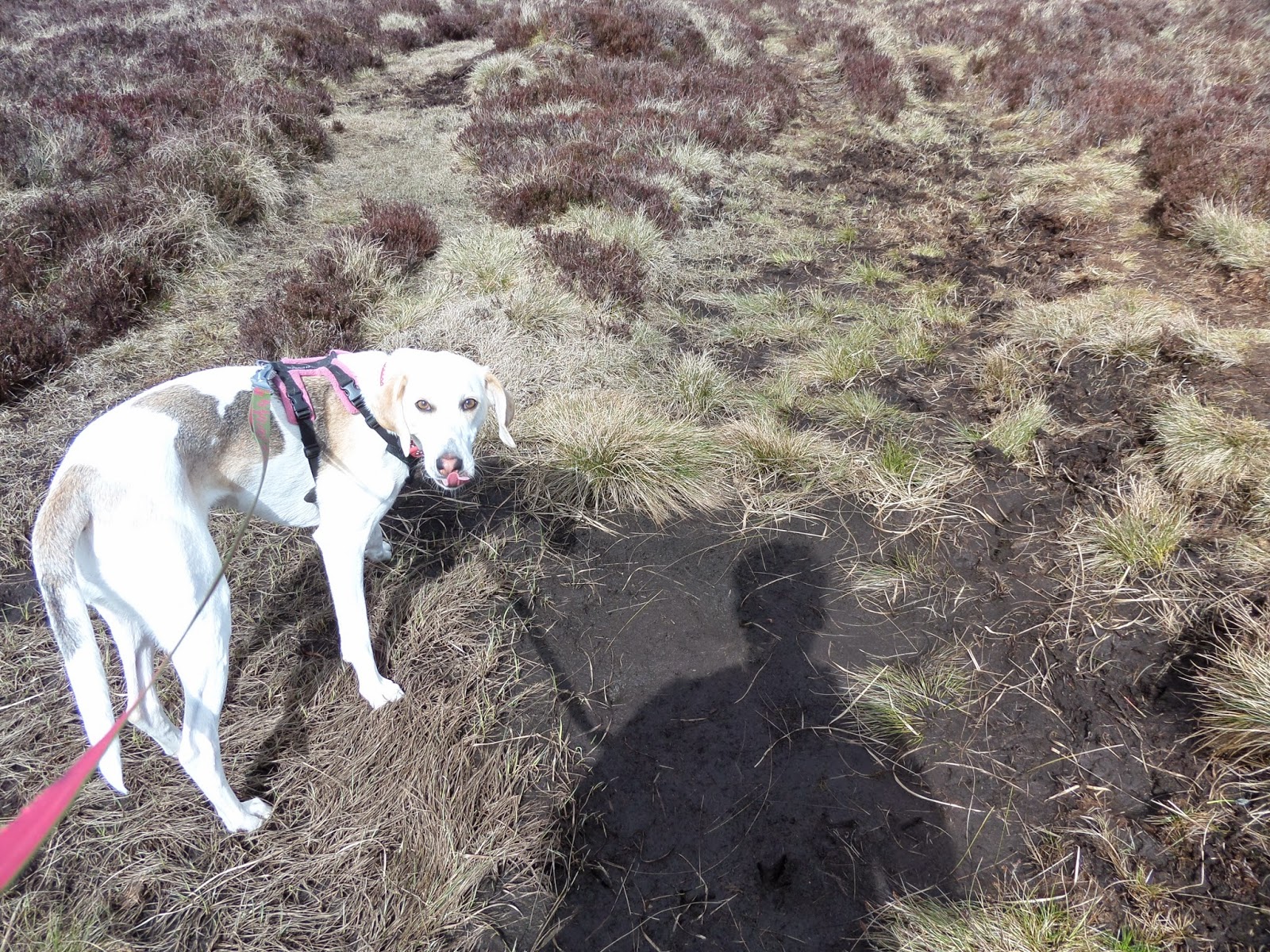 Heidi's paws are still white at this stage but not for much longer!

Apart from it being a fantastic walk to start with, the main reason I wanted to go there was to visit a newly erected stile which crossed the border fence from England on to the Schil which is on the Scottish side of the border ridge.  This stile has been erected in memory of Carol's wonderful husband Ian, who knew every inch of this part of Northumberland. Ian sadly passed away in June 2013 and , so it was quite an emotional day. 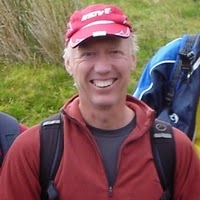 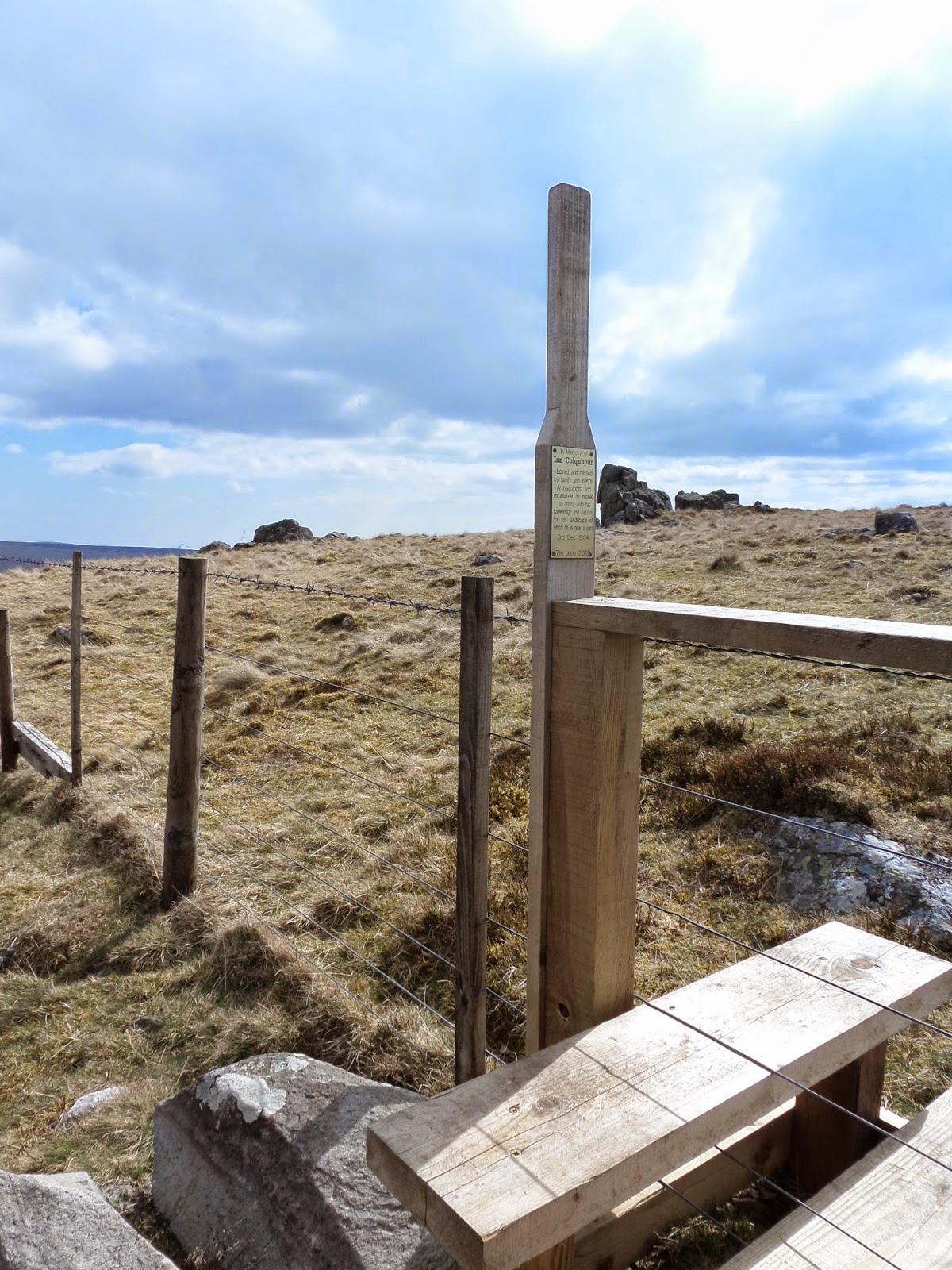 The new, welcome stile over the wire fence to the summit of the Schil 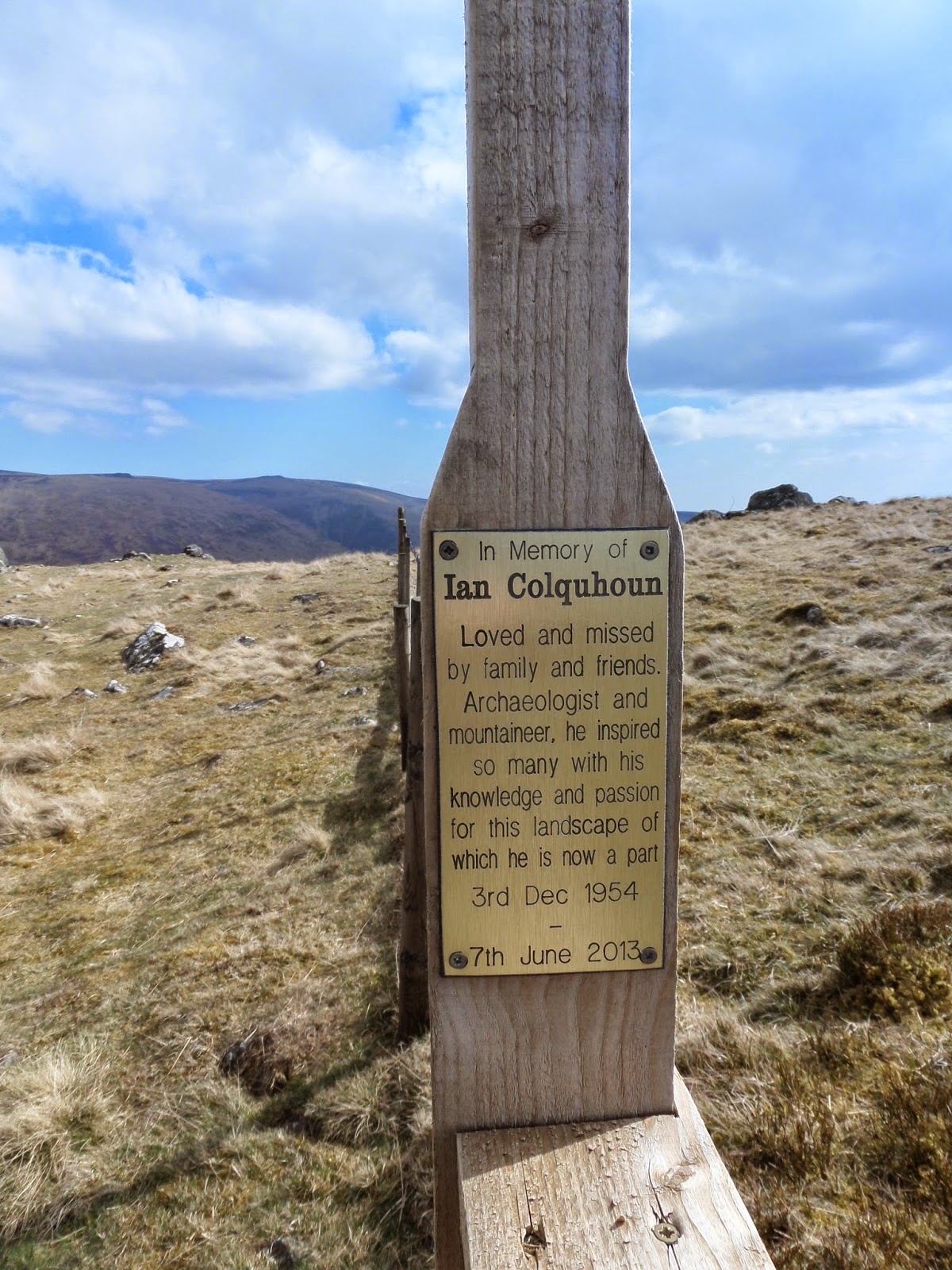 A fitting tribute to Ian's memory

Carol and I popped over the stile onto the summit of the Schil and Carol took the obligatory photo of me with arms outstretched having reached my goal with my trusty companion, Heidi then after scoffing a Club biscquwit we headed back down the track towards our car back at Mountyhooley car park. 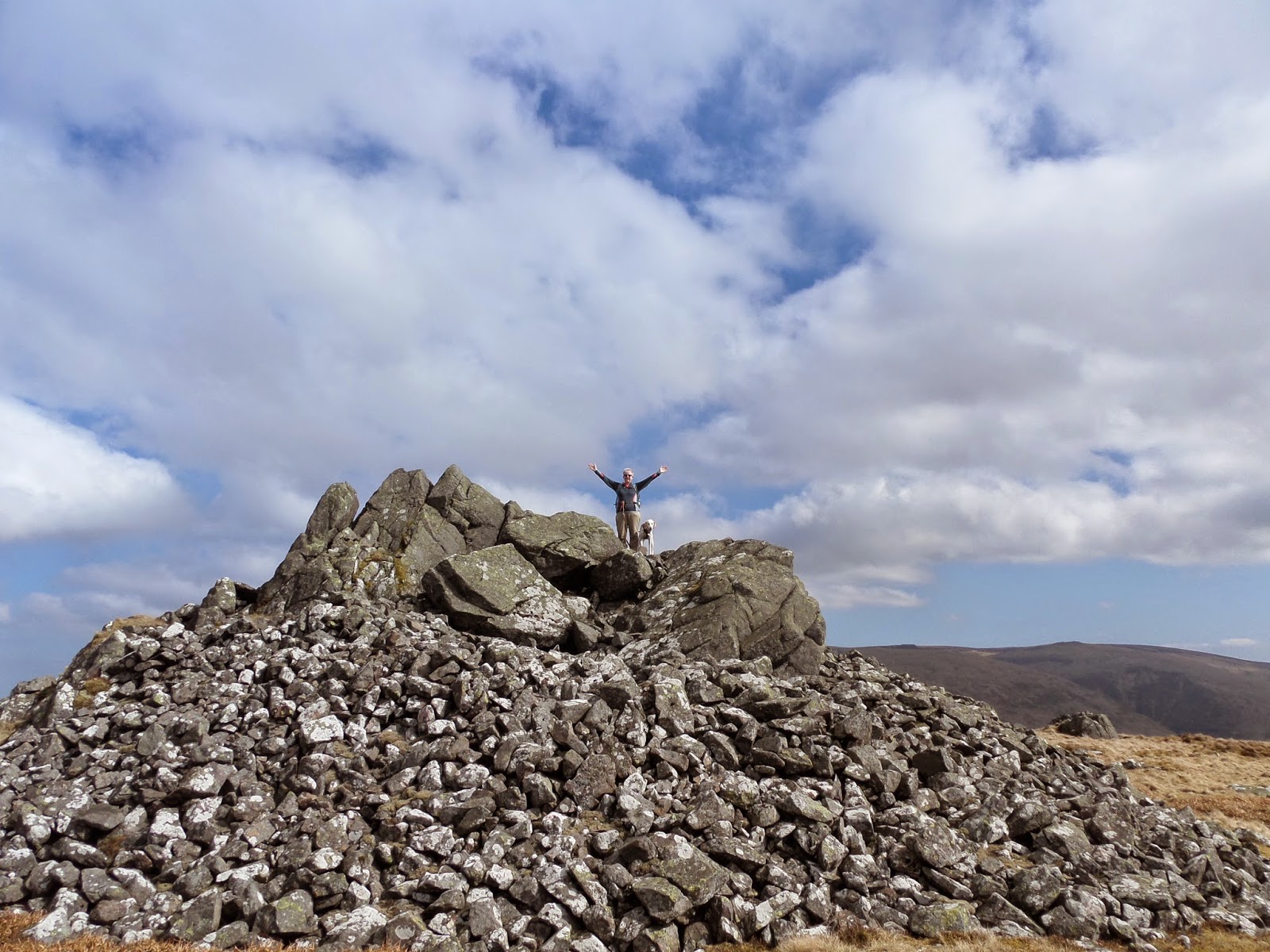 Feeling on top of the world 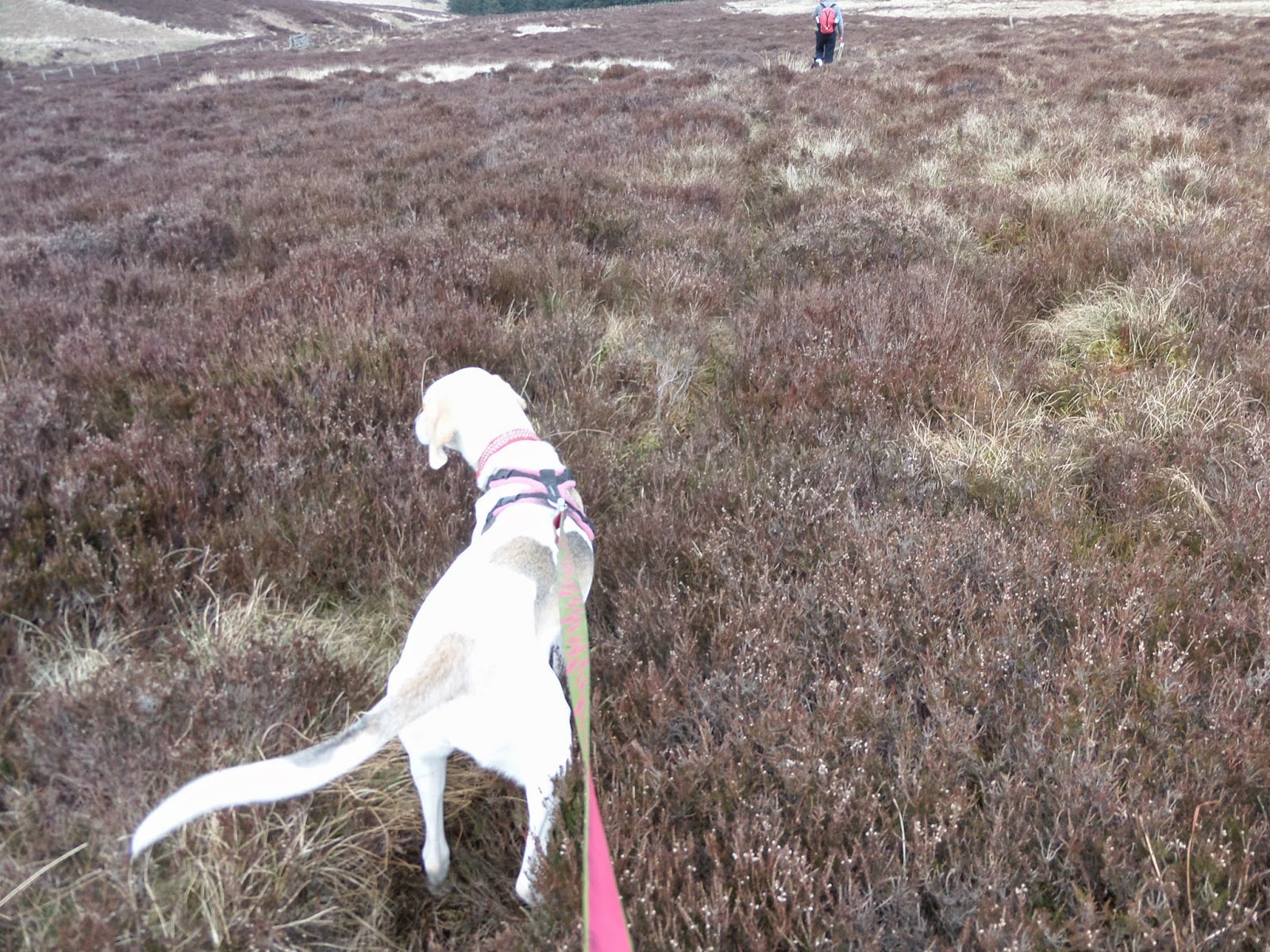 This bit was quite tiring - having to lift your legs over foot-high heather! 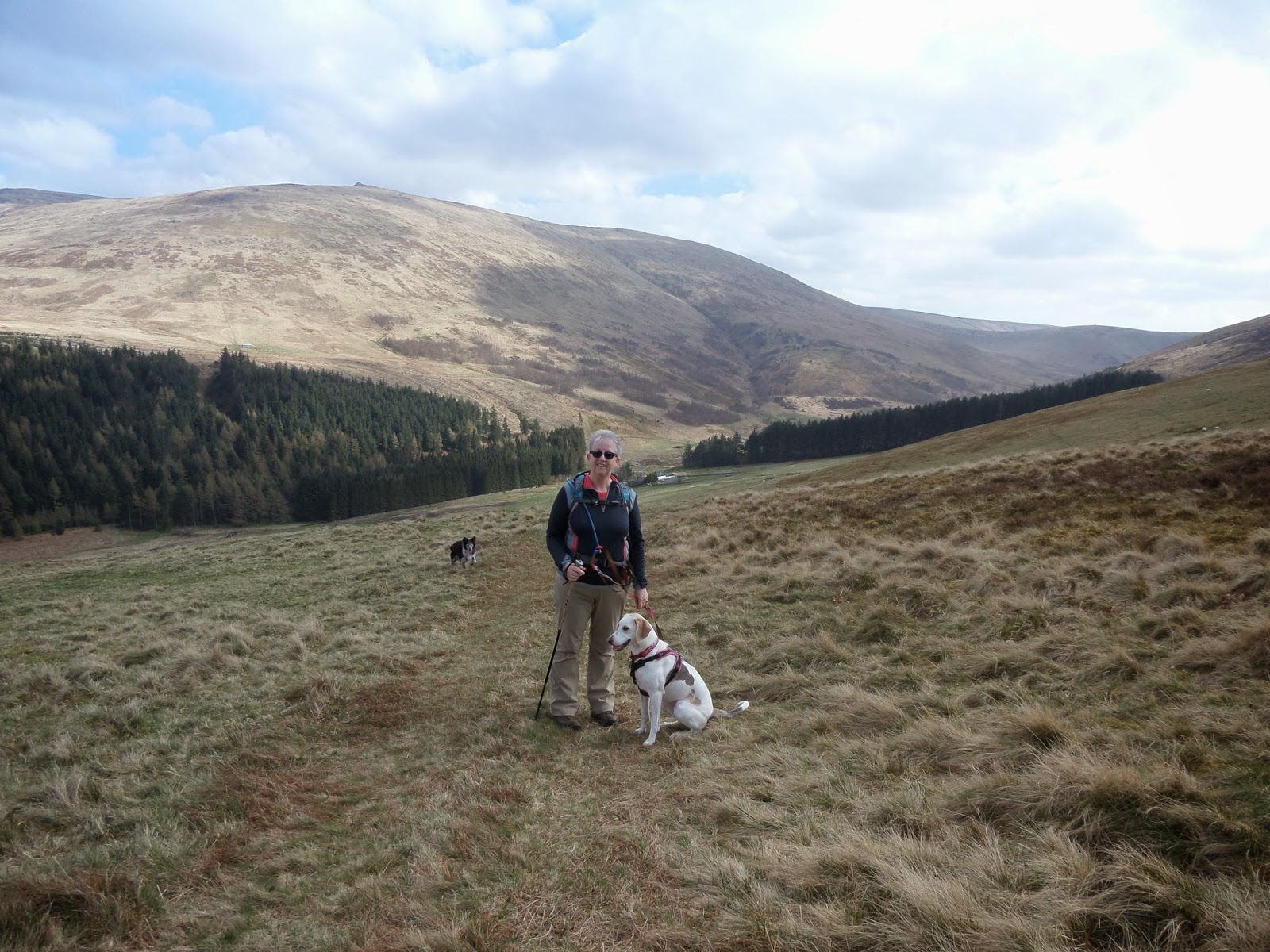 This was a wonderful walk in a magical part of Northumberland that I have never been to before but it certainly won't be the last.

If you're coming to Northumberland walking you MUST visit the College Valley or you'll be missing out on something really special.