We flew to Cape Town on 5 November 2010 and after a evening 12 hour flight, landed tired but very excited knowing that if our previous treks were anything to go by, we were about to embark on another fantastic adventure and how right we were!

After meeting our trek and tour guides, we were bussed to in Hermanus to stay overnight before heading off the next day to start our trek.  On the way to Hermanus we stopped in a beautiful parking area/view point for a lunch and then on to visit an African Penguin colony which was a very pleasant introduction to South Africa. 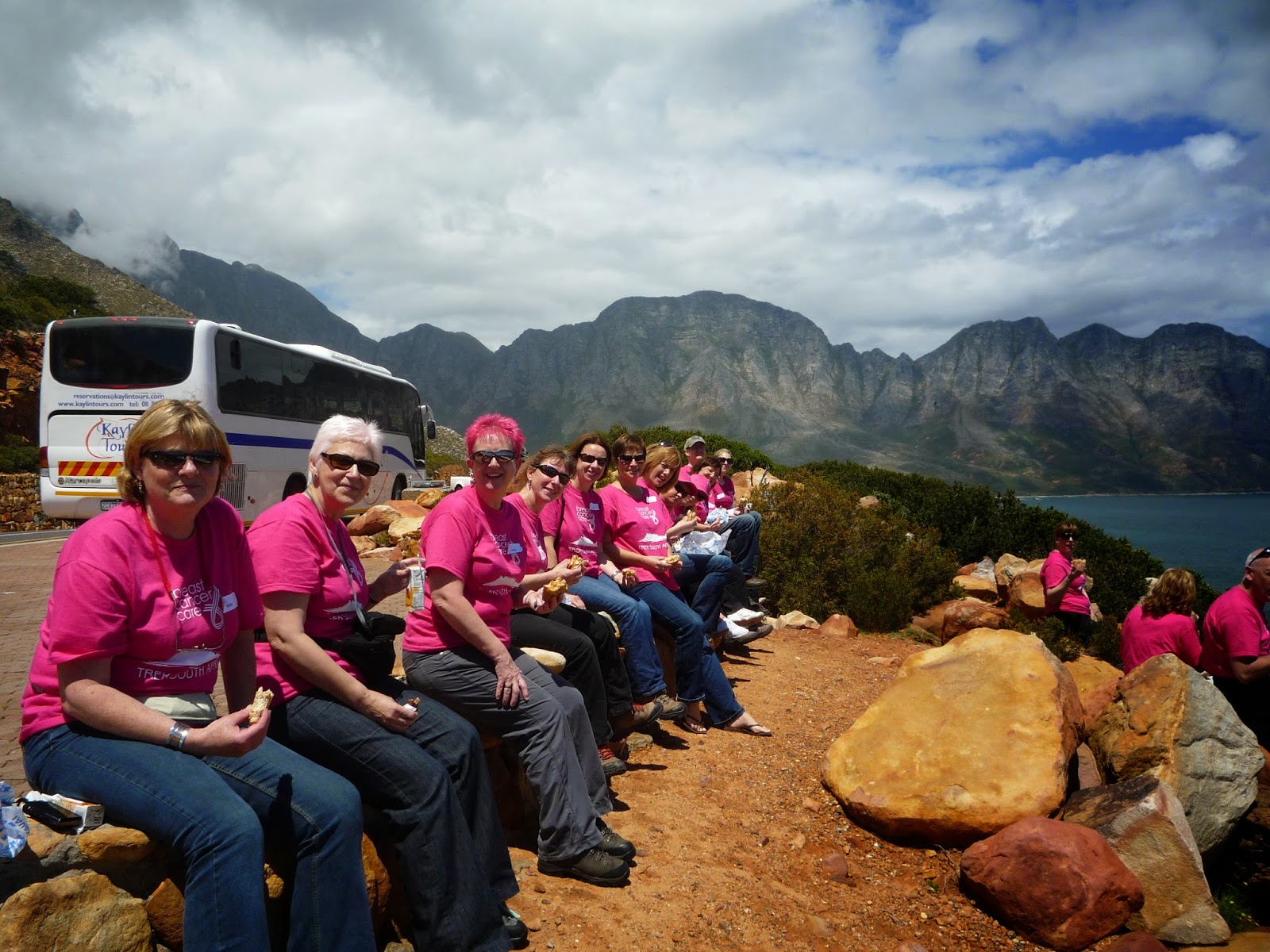 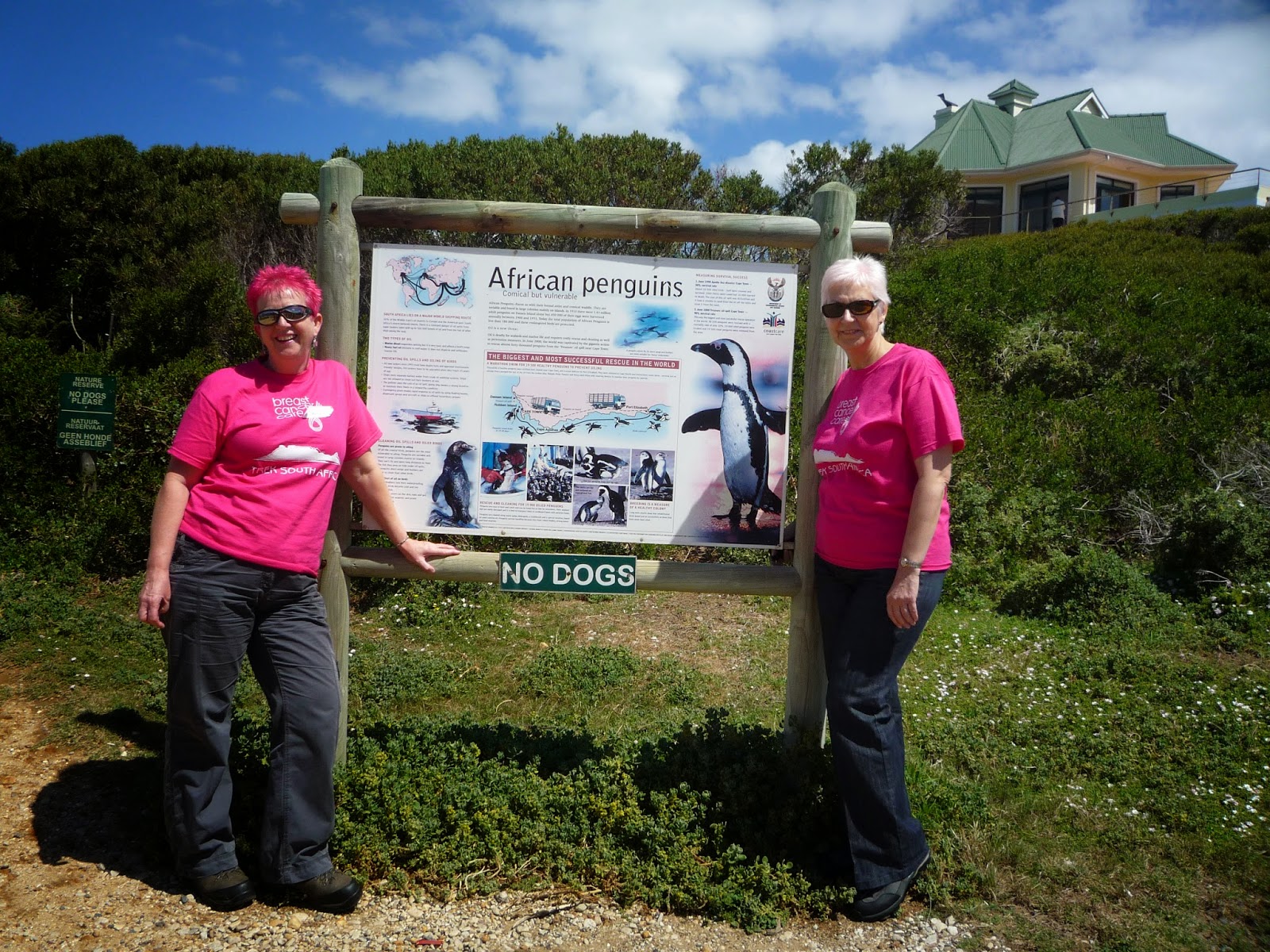 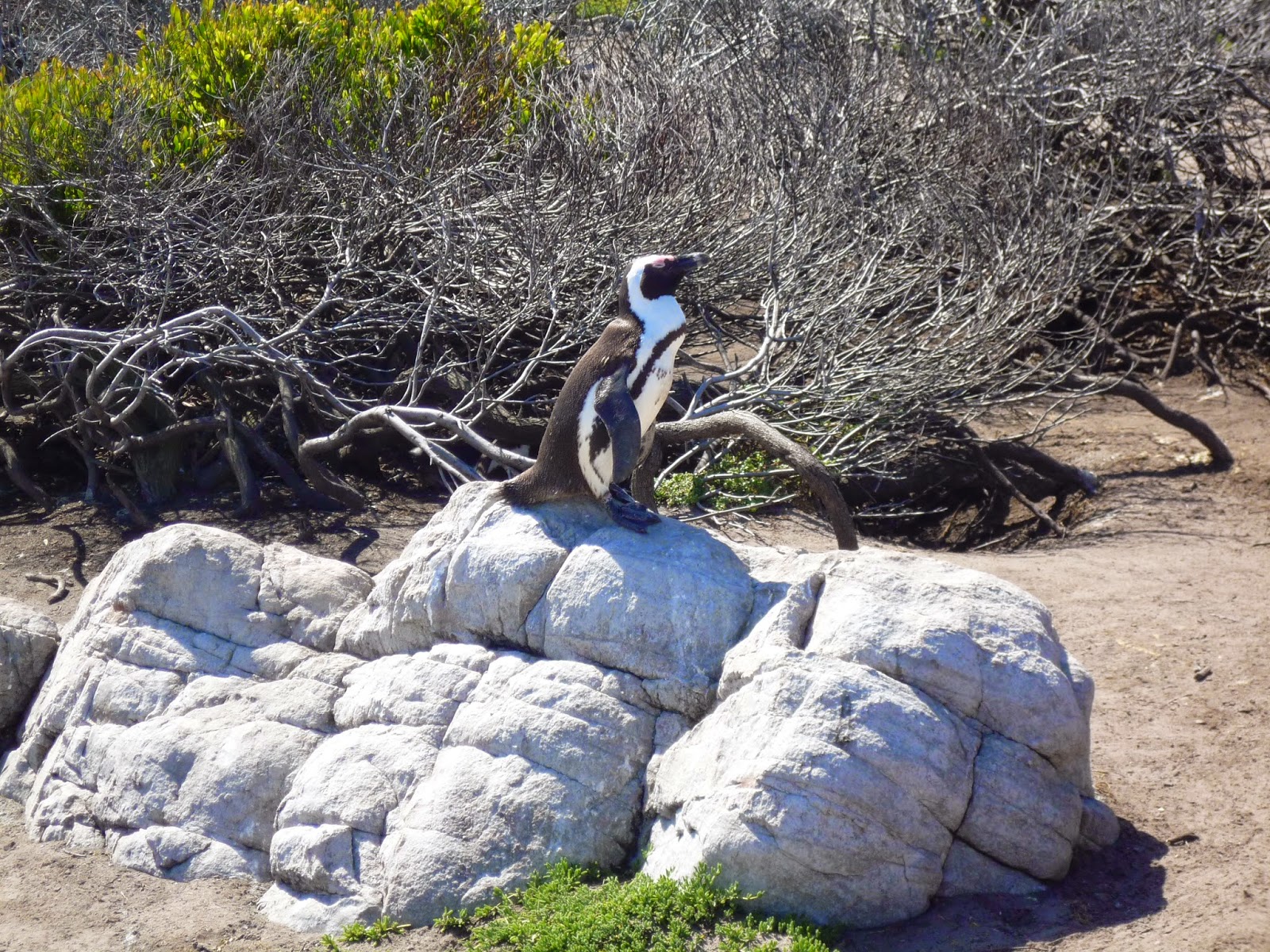 Before we had our evening meal we had a walk along the coastal path and were amazed to watch the antics of some massive whales leaping out of the water.  Hermanus is known as the Heart of the Whale route and offers some of the best whale watching in the world.

Over the following 6 days we were really put through our paces and most days walked for at least 5 hours.  In total we walked around 70 km/44 miles.

After our first overnight stay in a hotel we were once again bussed to where we were going to start our trek, the De Hoop Nature Reserve which formed part of the world's smallest and most threatened plant kingdom - the . The reserve has 86 mammal species and is famous for its variety of resident and migratory birds - more than 260 species have been recorded on the reserve. We had the choice of camping out in the grounds or staying inside in a domitary - I chose the latter because I'm a whooos and like a bit of comfort. The only thing that I wish I had was a pillow because there wasn't any supplied.  Never mind LOL. 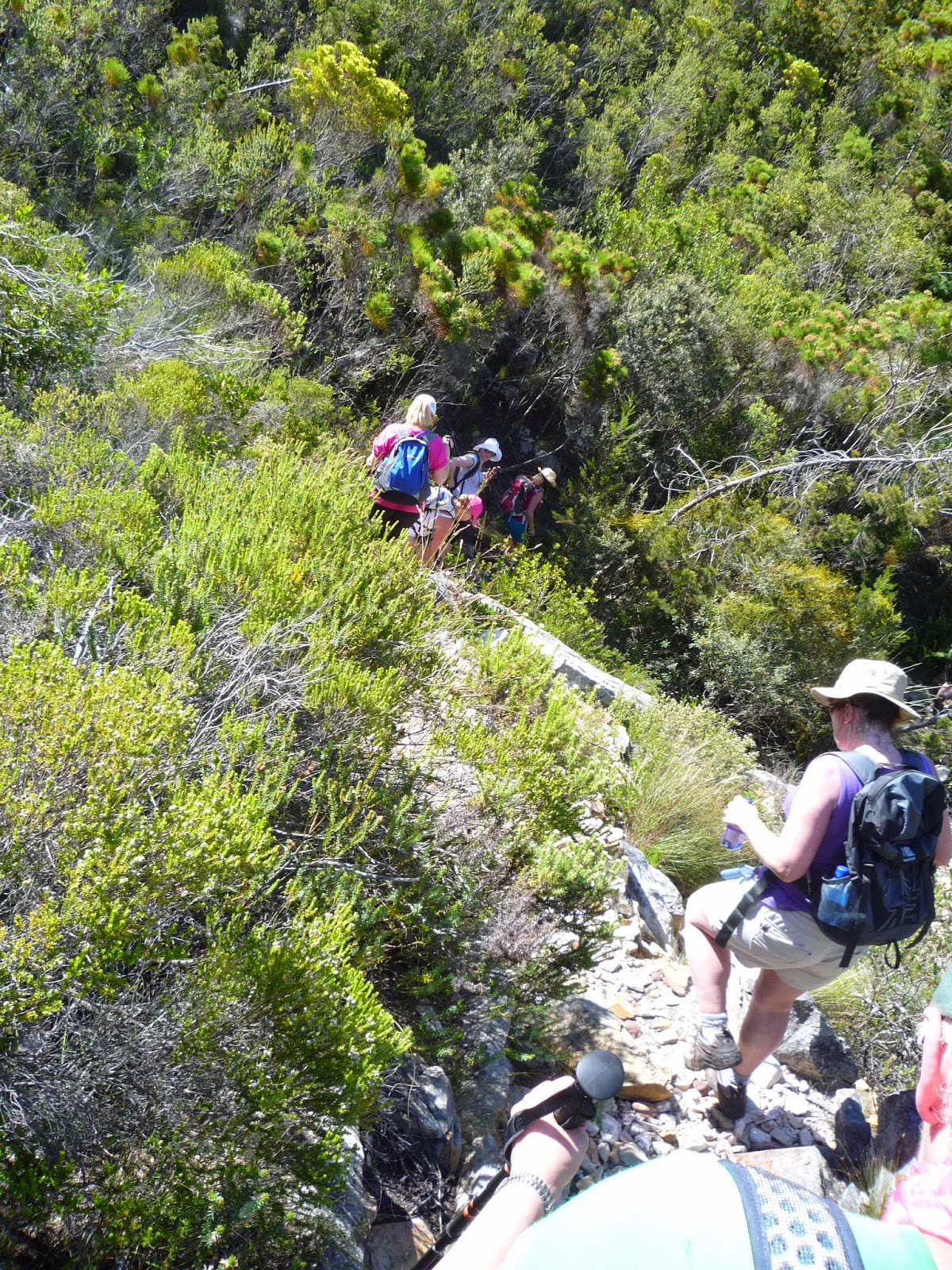 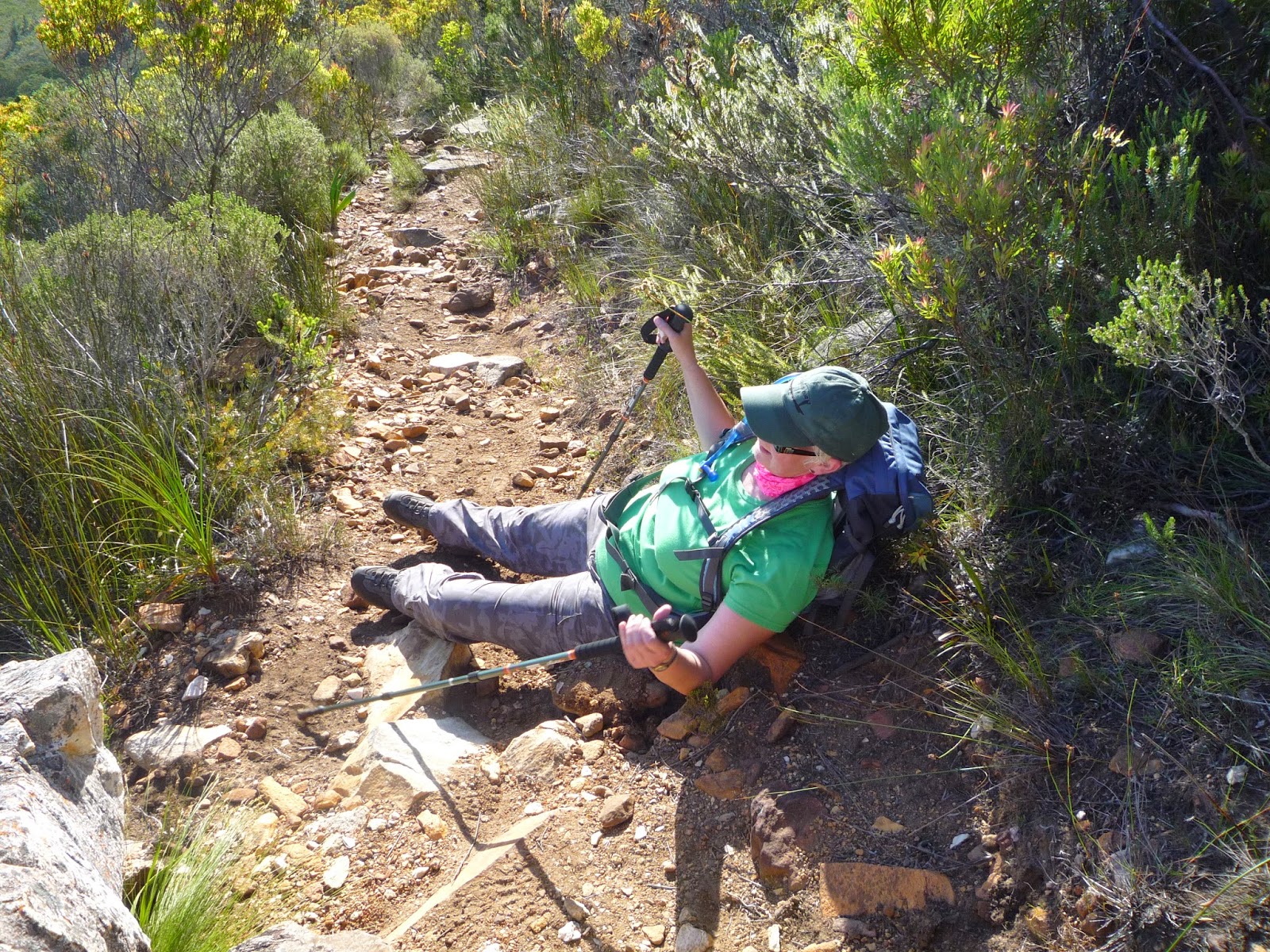 The first of Pat's three accidents - this one on our first walk, the second only half an hour later!

Day 4 - The terrain was different every day and today was spent in the De Hoop National Park where we started by walking along a relatively flat lagoon edge heading to the coast, climbing over sand dunes to the Indian Ocean!  It was almost like walking in the desert because there was sand and dunes as far as the eye could see and after three hours we were exhausted.  When we finally reached the beach we stopped for a well deserved rest and lunch after which we had another 4 hours walking on soft sand.  To say we were tired at the end of the day was an understatement as we had been up since 5 am for an early start in order to try to get as much of the walk done before the sun rose high in the sky.  This was possibly the hottest it had been so far - having said that, this was probably my favourite day. 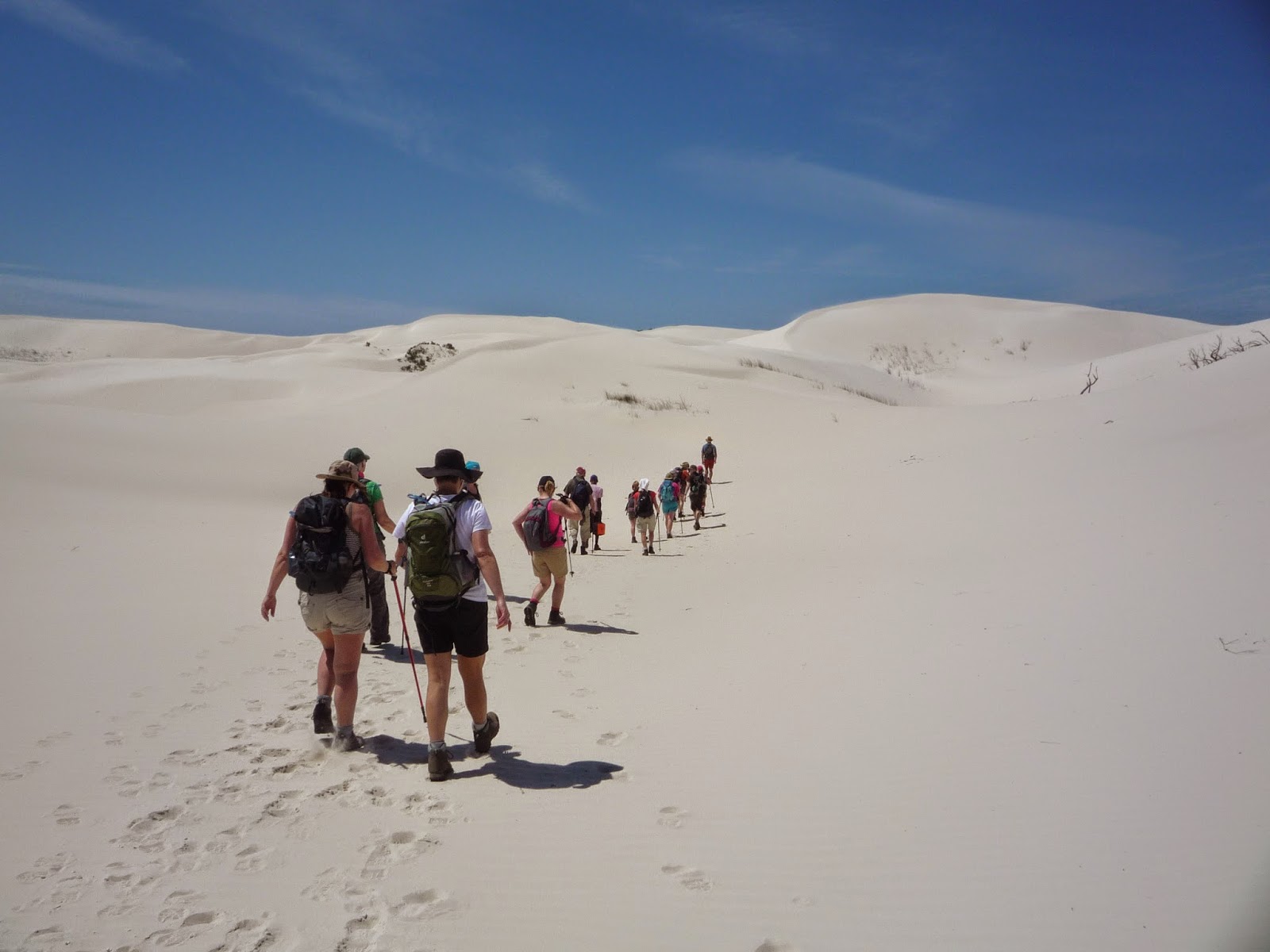 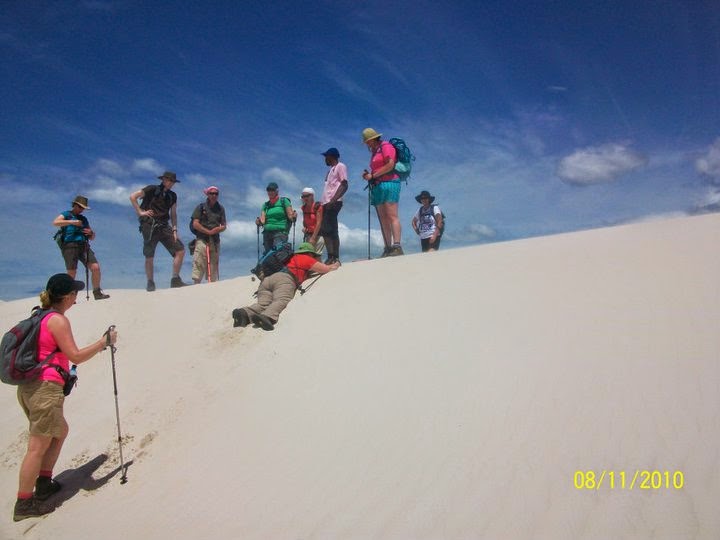 I wonder who couldn't quite make it to the top?

Day 6 - We walked the Boesmanskloof Trail which passed through the spectacular with steep gorges, large rock pools, waterfalls and lovely wildflowers.  Again, this was a tough day as we walked in blistering heat but the views were so stunning it made it all worth while.  Some of the group went for a swim in a lagoon but when I heard them gasping because of how cold the water was, I decided to stay on dry land. 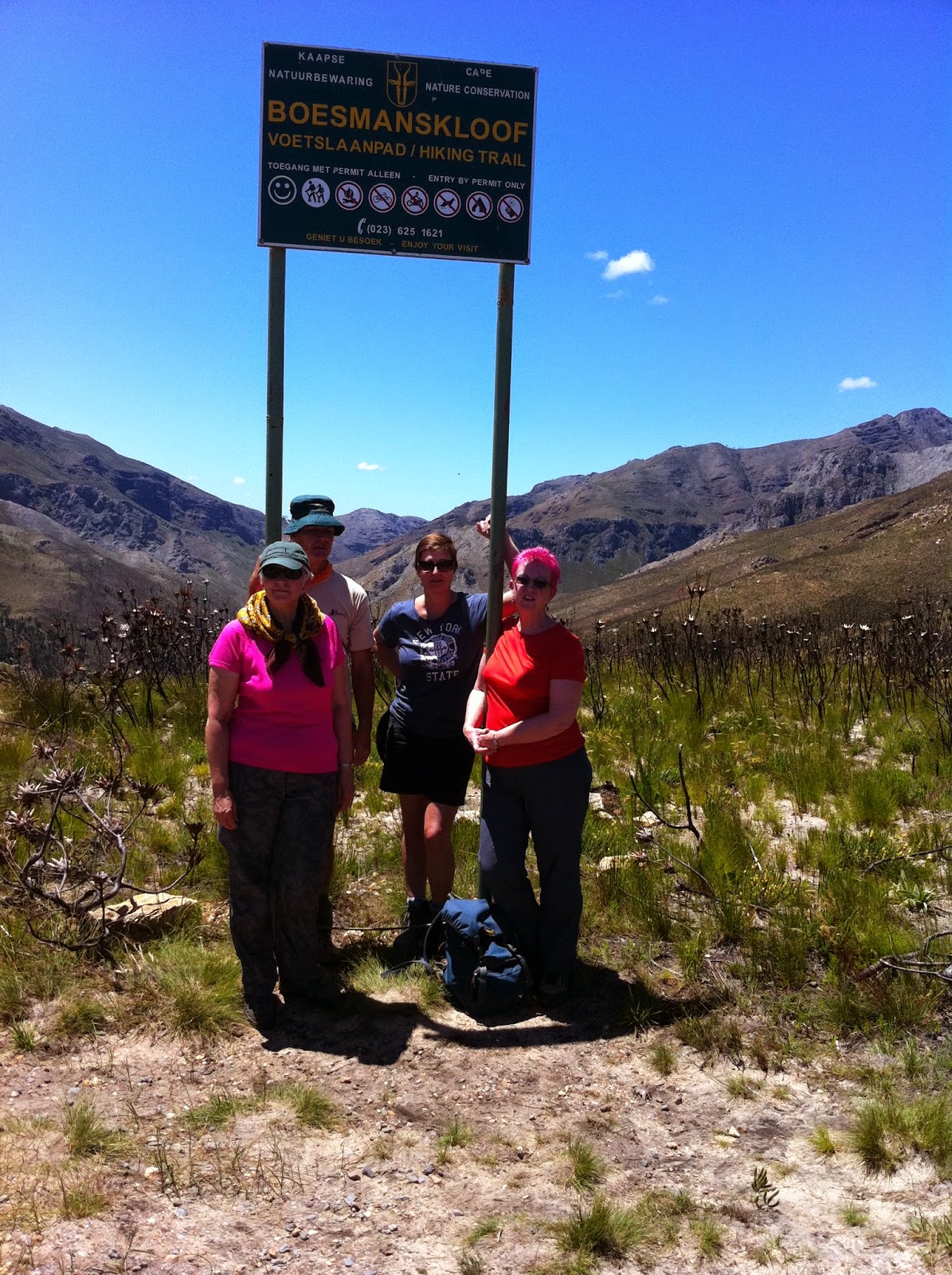 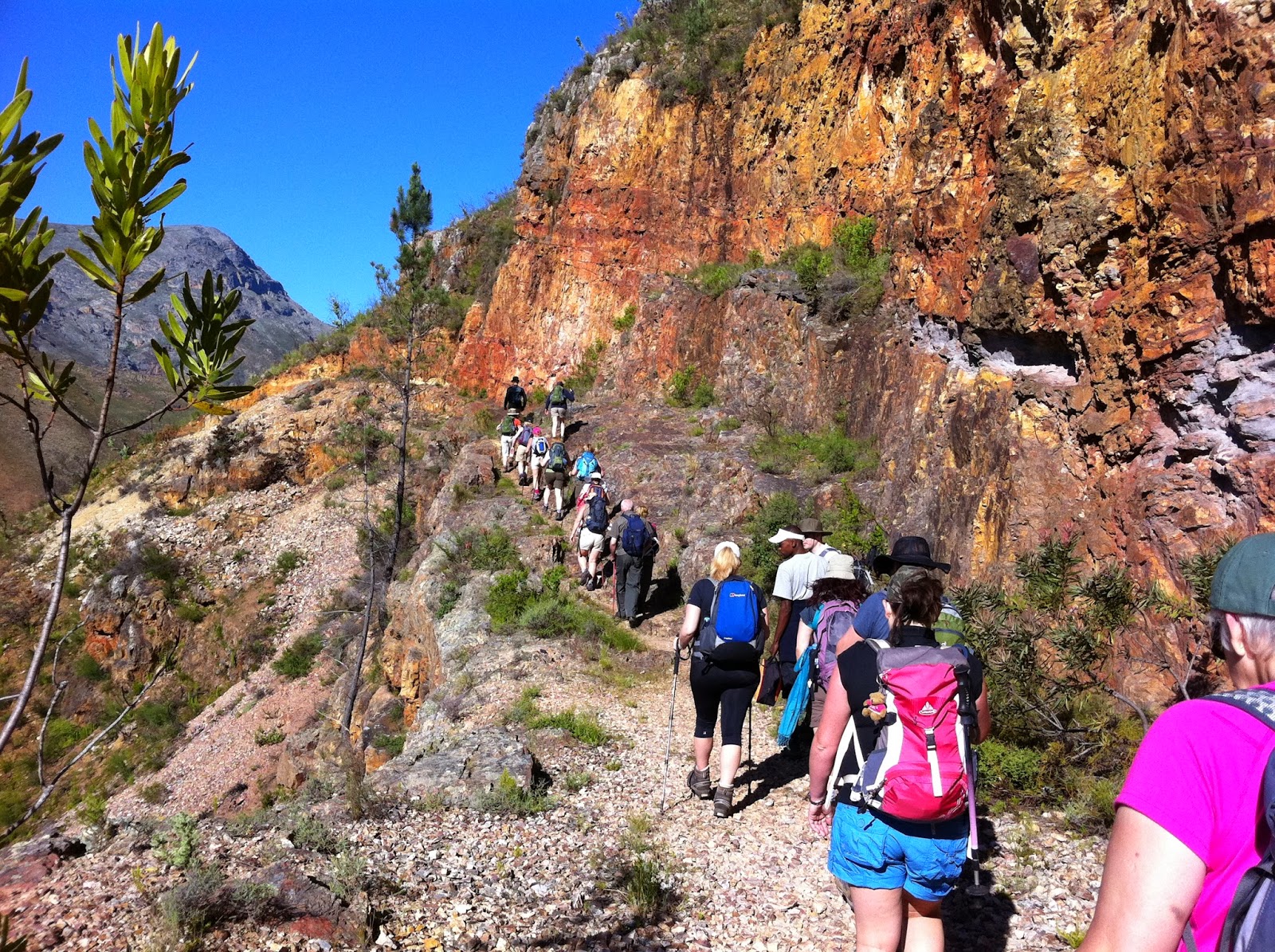 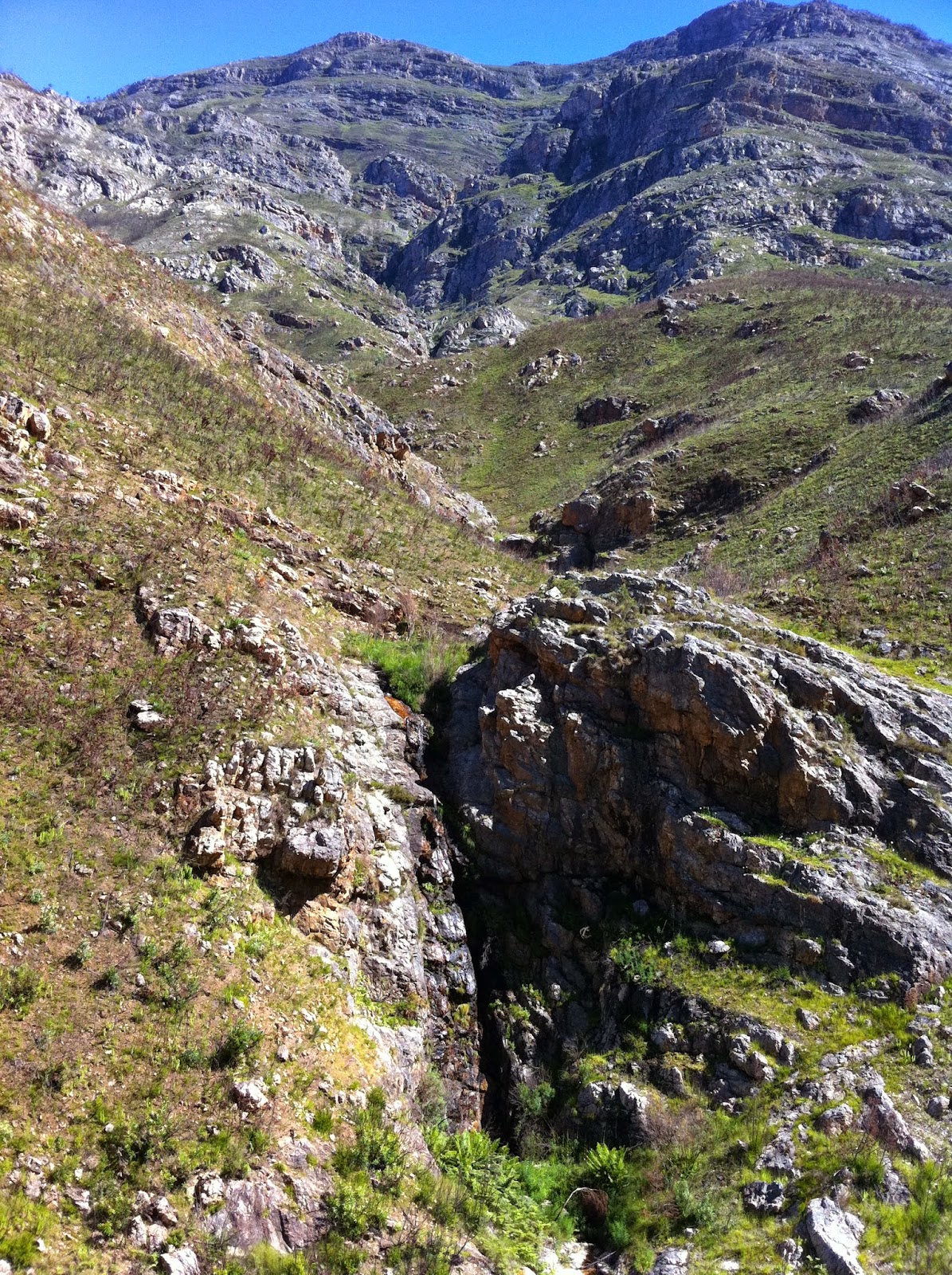 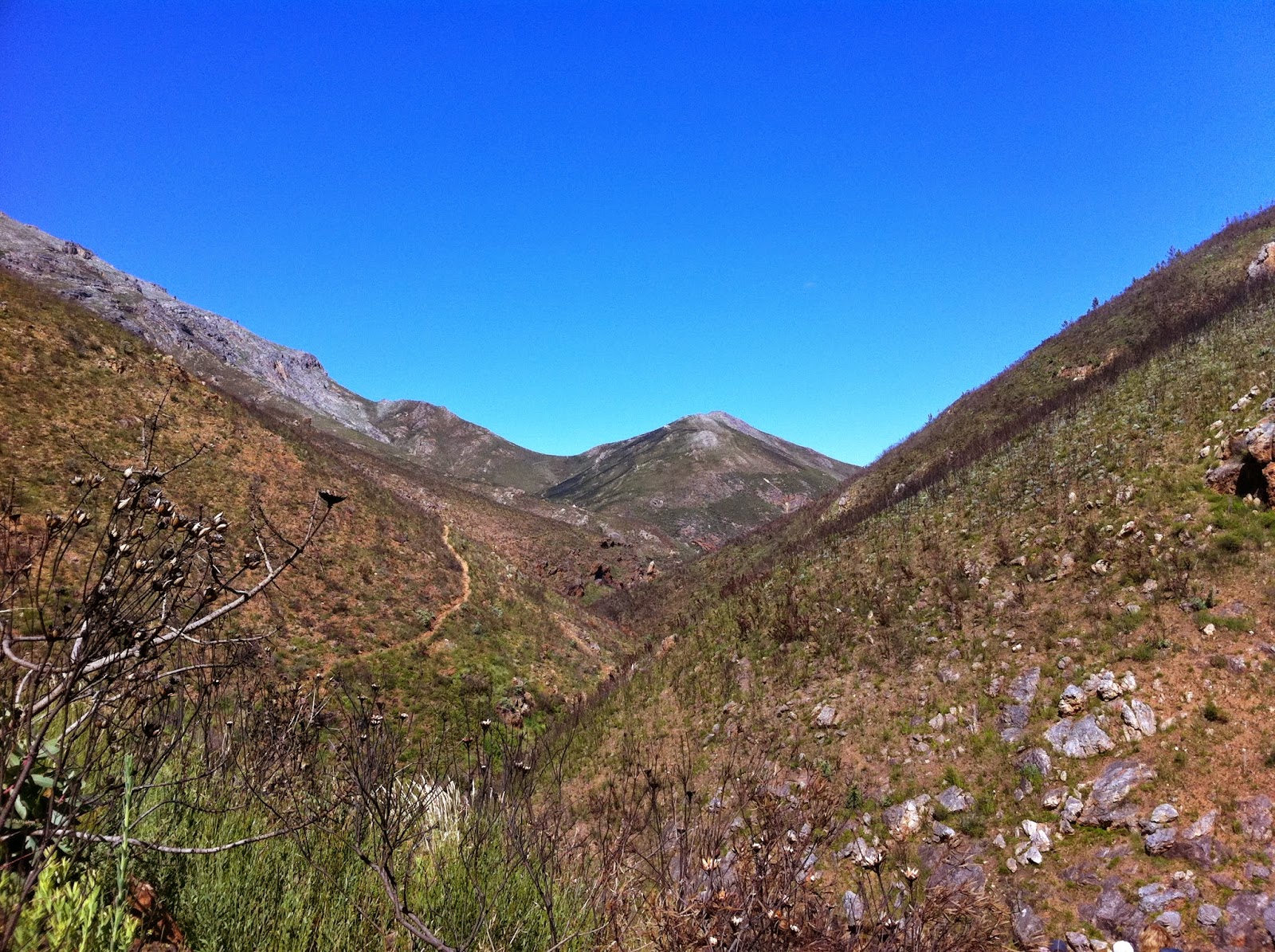 This would have been a completely uneventful day as it was the easiest day of them all but my sister Pat had her third accident this day - she slipped on a rock and hurt her leg.  She was in a lot of pain as she cracked her shin off a rock but continued on.  Later she had the most fantastic bruise and we laughed about it but really she was in considerable pain.

This was the hardest day of all and took us 11 hours to complete.  It’s so difficult to put into words but in a nutshell, we walked up the for 5 hours, had one hour’s rest for lunch then walked the 3 km along the ridge to Maclear’s Beacon where the summit was 1085 metres high.  After having our official photos taken we then spent the next 5 hours coming down! 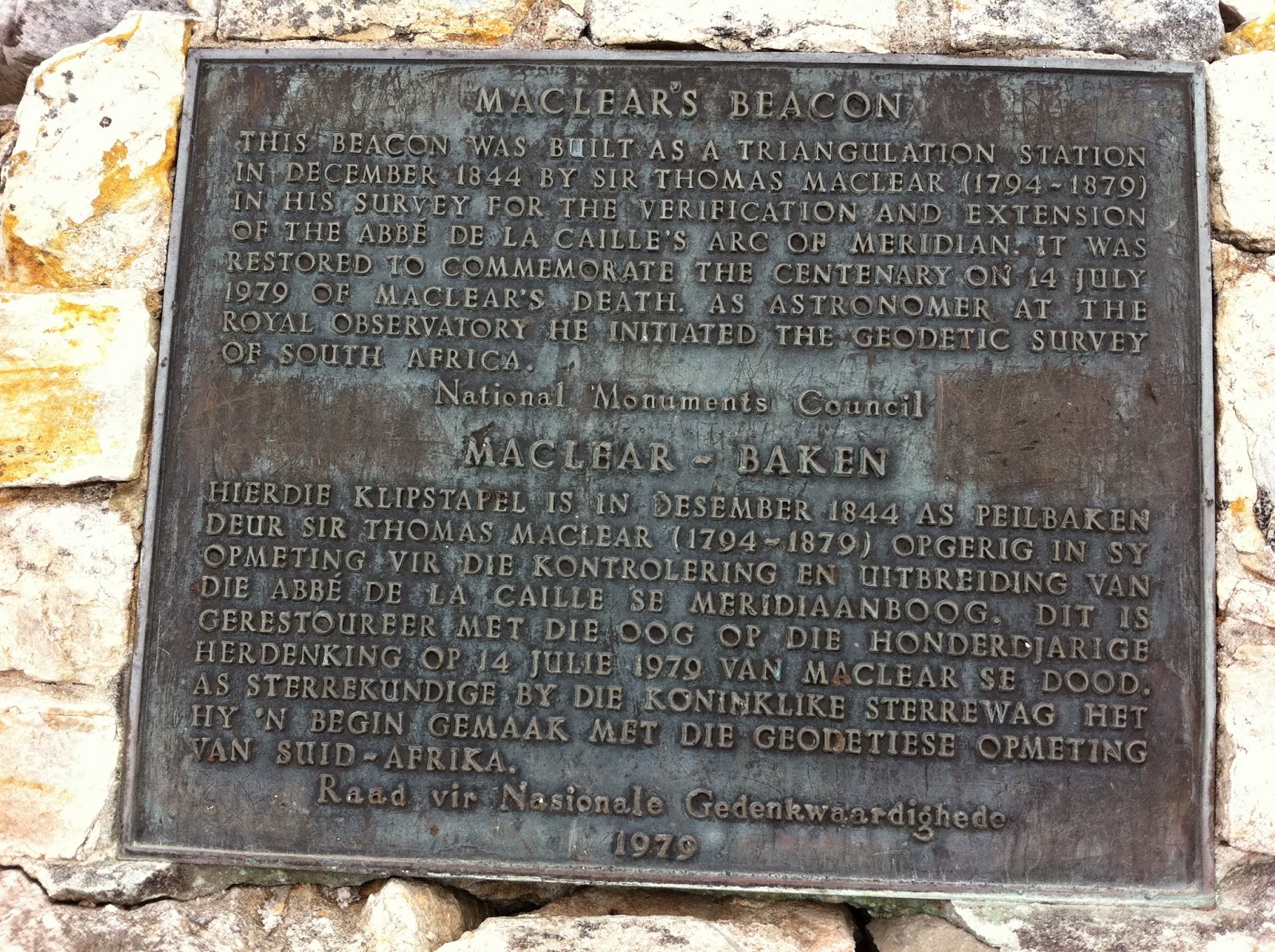 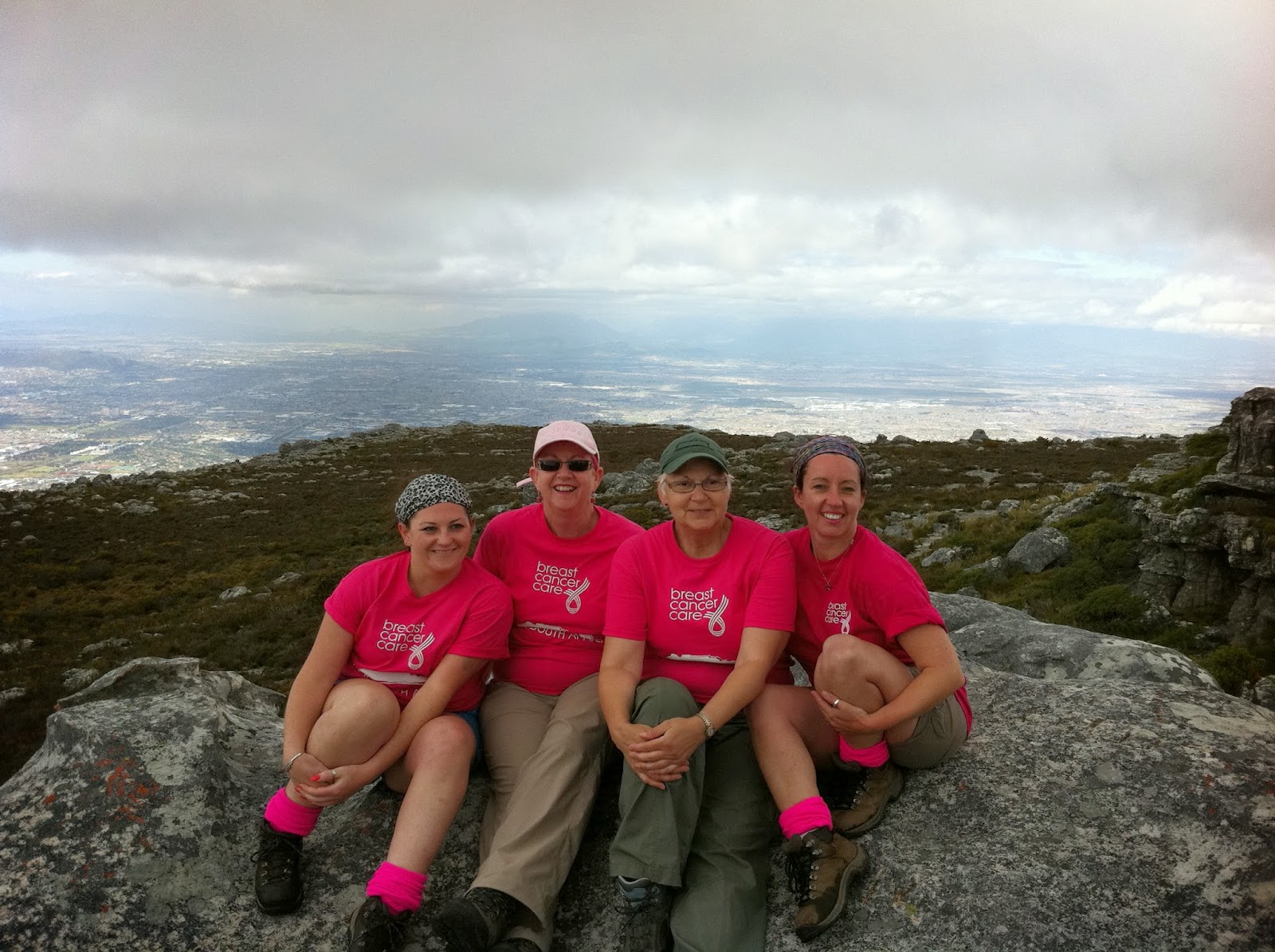 Cape Town behind us - Claire Miles, myself, Pat Taylor and Claire Campbell

Of all the treks we have done I felt this was the hardest but it was the one that gave us the biggest sense of achievement.

Day 9 - Final day sight seeing in and around Cape Town

Our last day was one of leisure which we were all looking forward to.  We had a choice of doing absolutely nothing or going on any of a number of excursions.  One on offer was a shark dive - this entailed going into a cage and being lowered into the sea where white sharks would come look at you, probably thinking "yummy, packed lunch" haha! Believe it or not I was up for it but because the trip didn't get back till 5 pm I couldn't do it because we had to be at the airport for our evening flight home by 5 and were being picked up at 4 pm.  Instead some of us opted for a visit to one of the townships.  This was a huge eyeopener, seeing how poor the people were and the conditions they live in.  Our guide told us that in general, most people were happy with their lot because they knew no different but crime was high there and it was only safe to visit townships like this with an official guide. 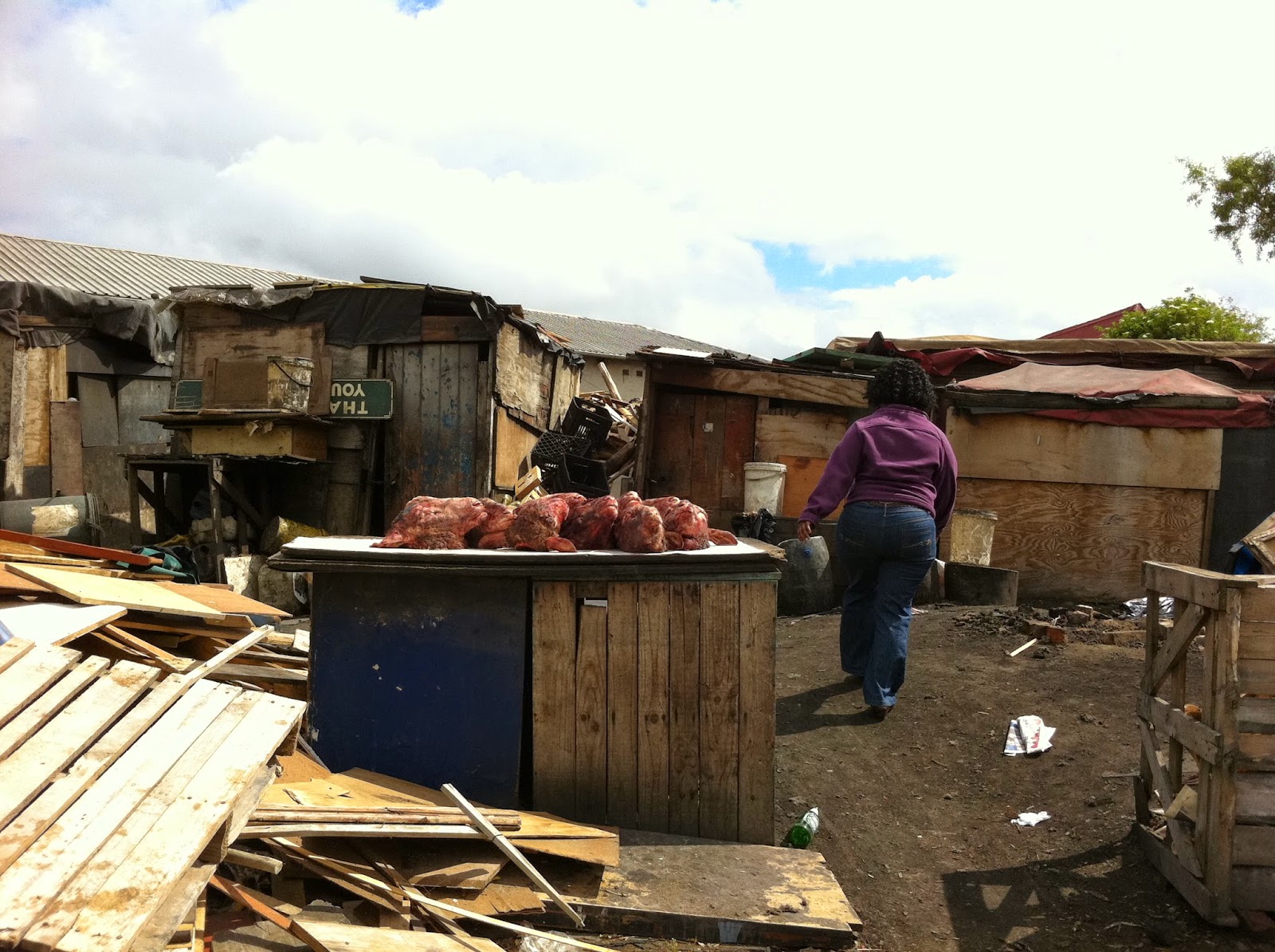 Yep, she was selling sheep's heads 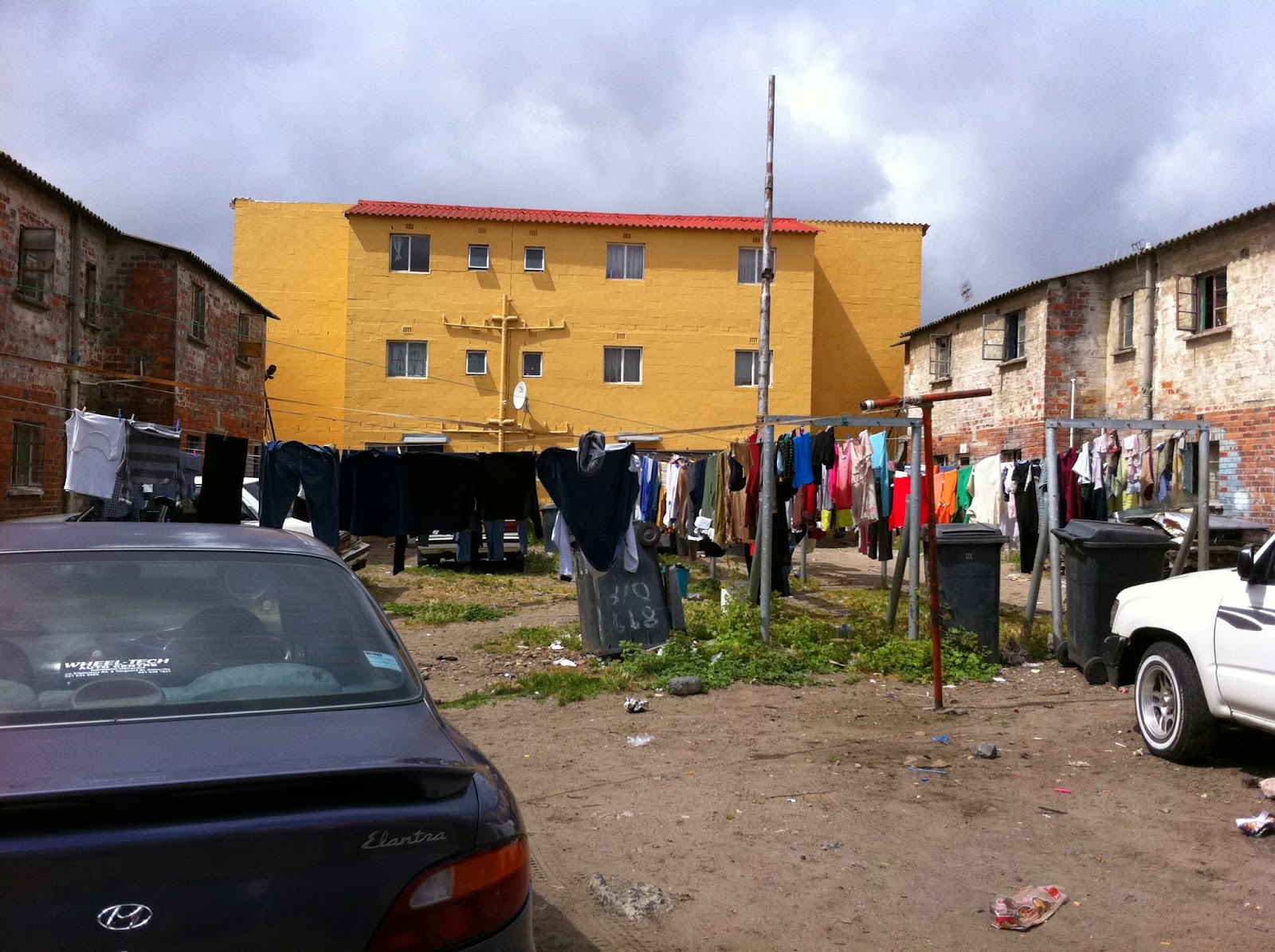 The people here were lucky as they lived in brick built homes but inside they were so small and sometimes up to 15 people lived in the same small house. 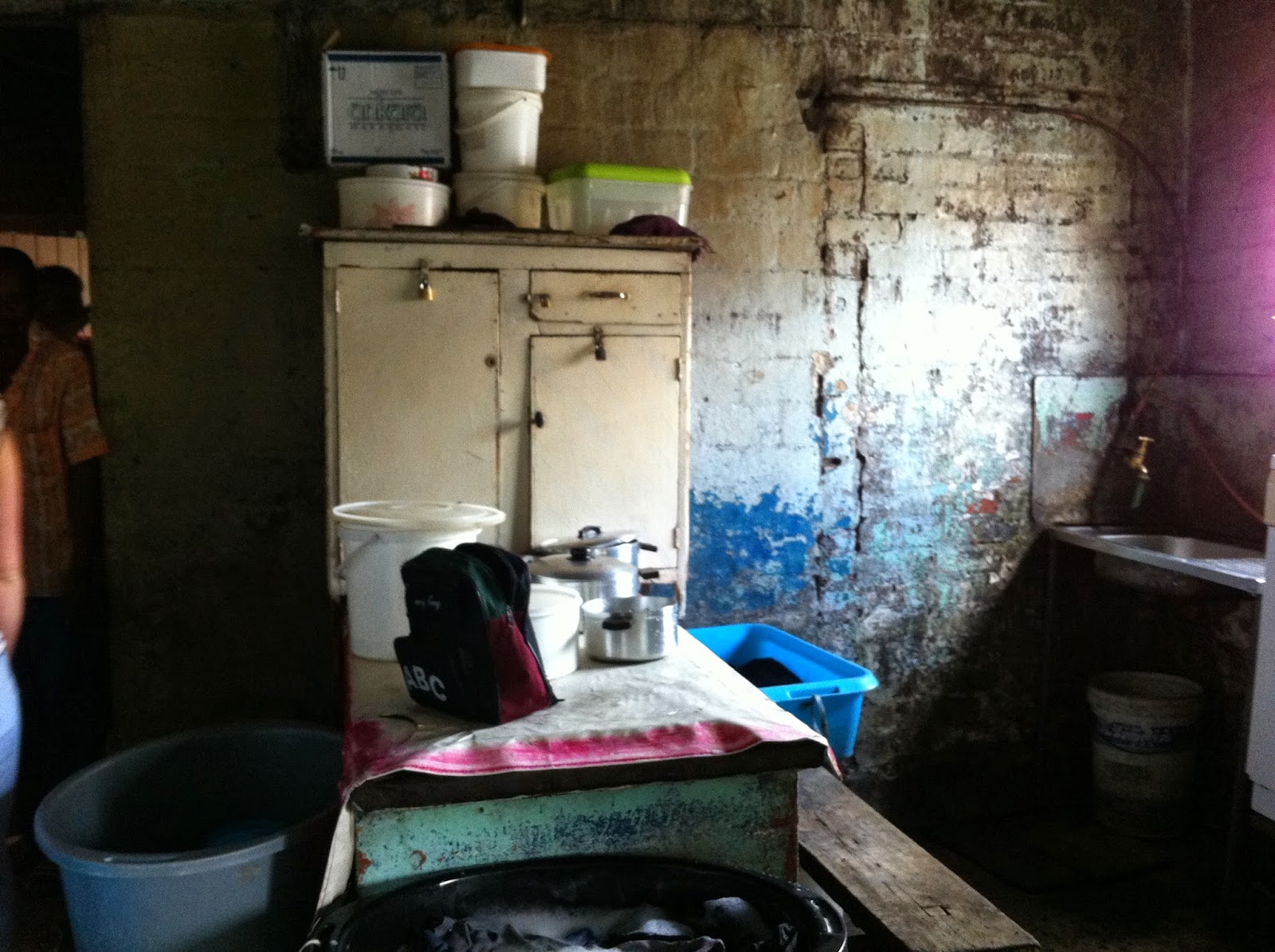 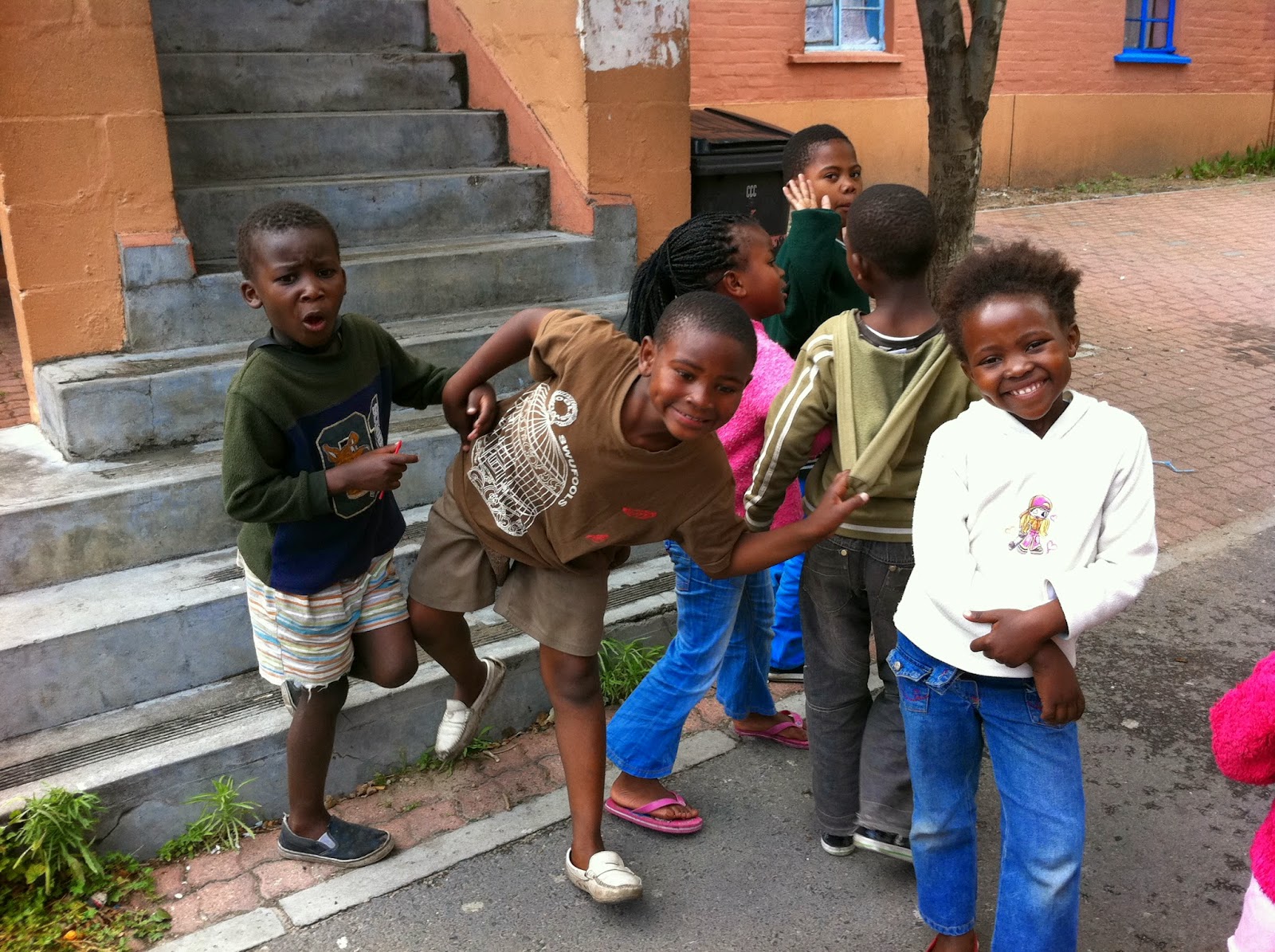 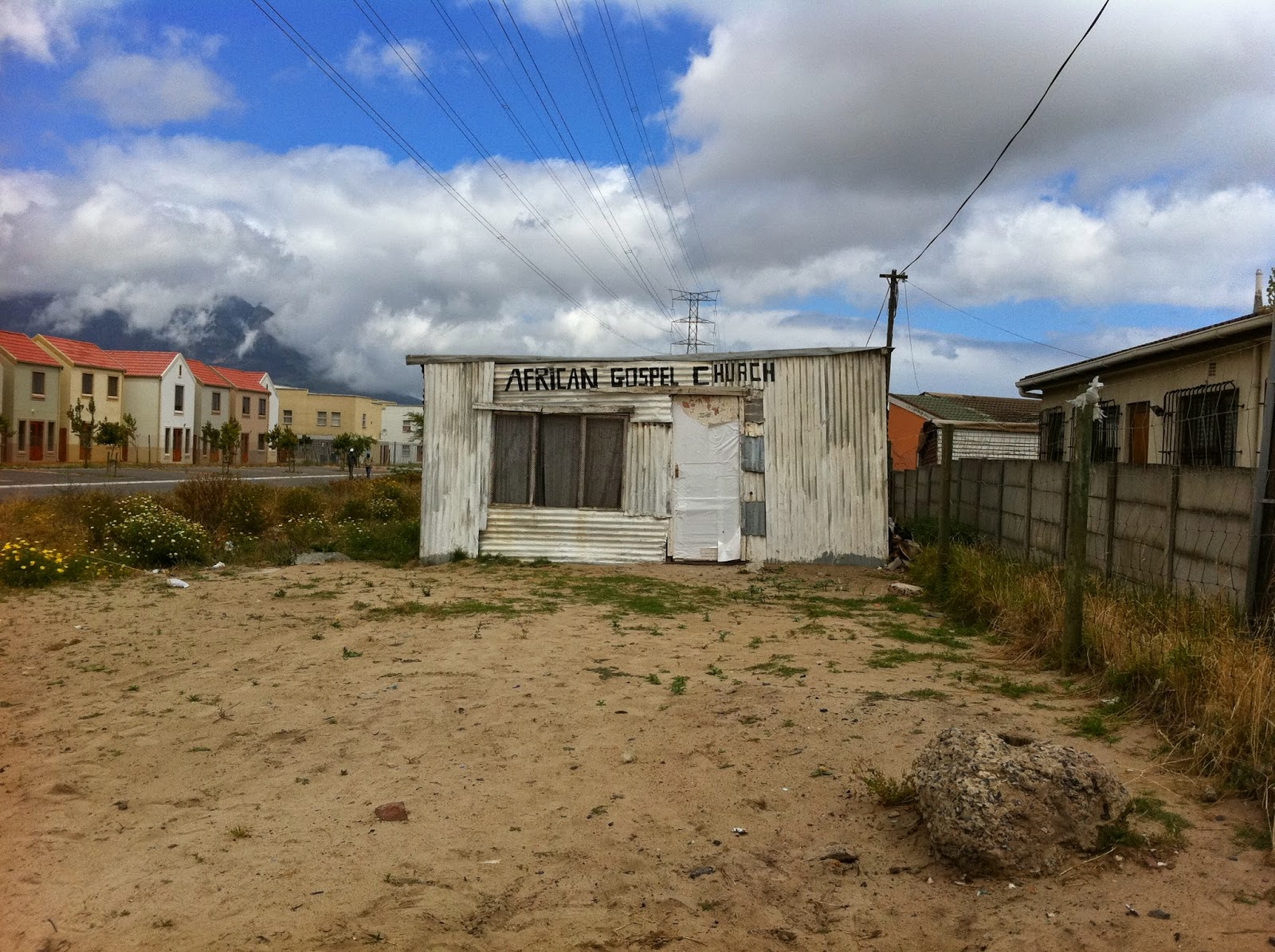 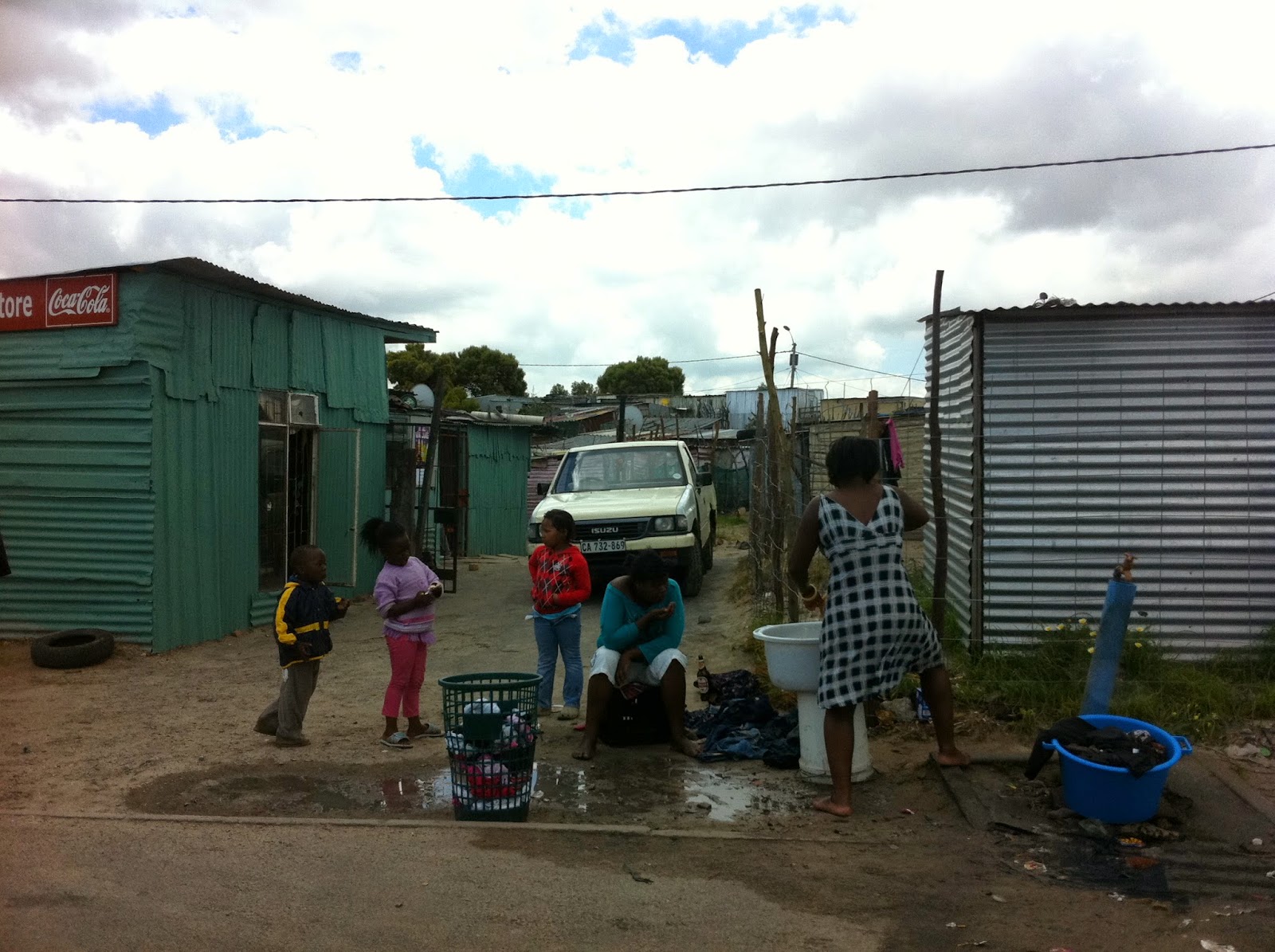 Postscript:  Three months after returning from , Pat was still having pains in her leg so she had an xray which showed she had actually broken the bone when she slipped on the rock at the seal colony, so on Day 7 she did 11 hours up and down , walking with a broken leg!!!! She’s my hero!
Posted by One Girl and her Dog at 13:53