I hope you've had time to read my previous post about the recce we did at Dufton in preparation for our walk this weekend to High Cup Nick - this is an account of the whole walk and boy what a walk! We chose a route from the internet which was supposed to be around 8.5 miles but because of my achilles tendon injury the recce we did the previously was to find a place to start the walk a bit further along the route in order to shorten it by a few miles. 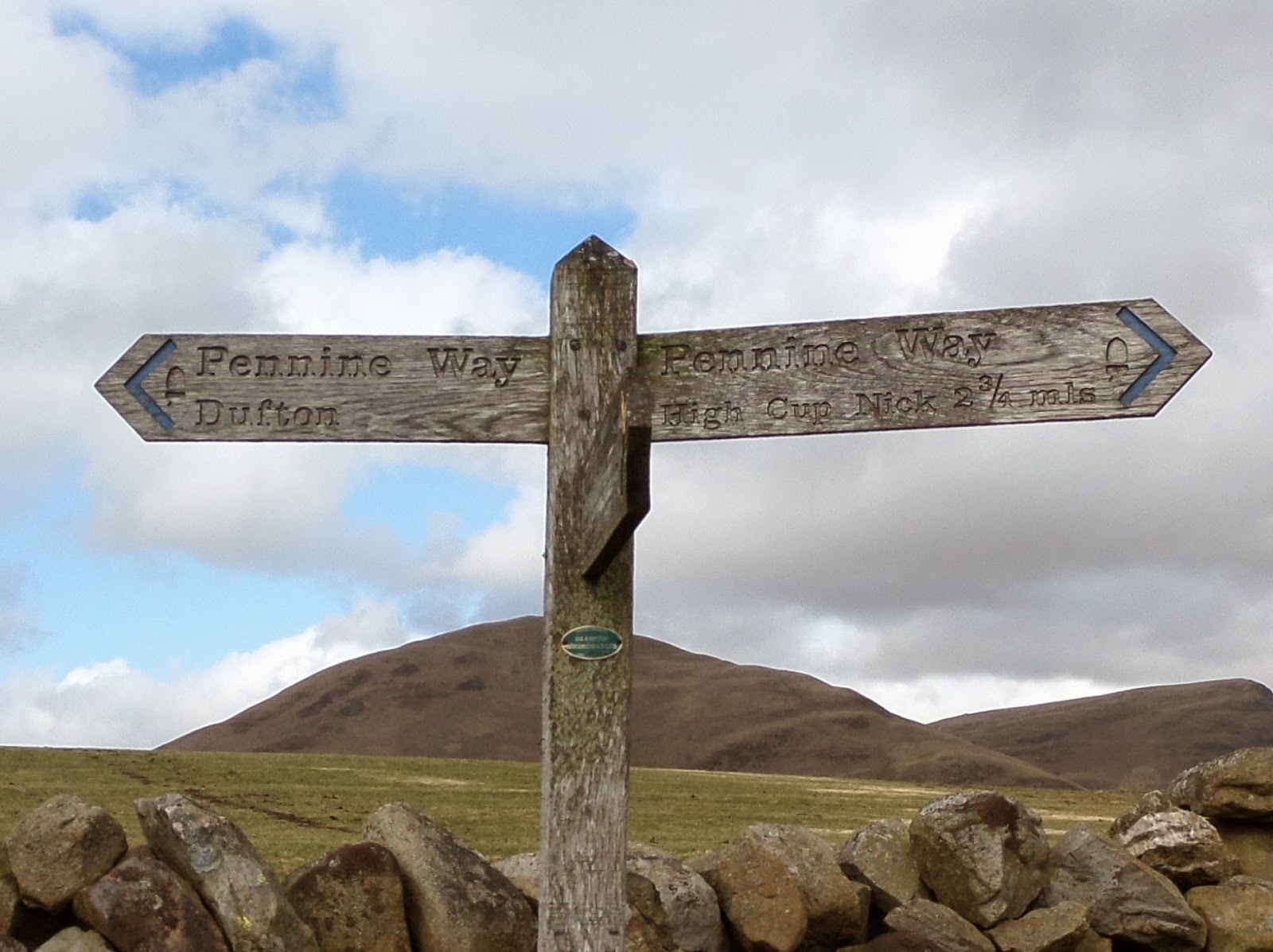 The start of our walk

The weather forecast was good for the day with light winds but it was very cold and icy and we could see snow on higher ground so we wrapped up well and made sure we all had a flask of something hot to drink for lunch later. We arrived at our parking place around 10 am and set off in high spirits.


The first 1.75 miles was the same as described in Dufton - A nice 3 mile bimble - 8 March 2015 so I won't bore you with the same information again.  The only difference was the weather.

This walk was particularly tough for me as my achilles tendon was playing up and after the first 2 miles I was planning on turning back as I was already in considerable pain but I decided to push on after gentle coaxing from the Hubster and Brenda, my BFF. 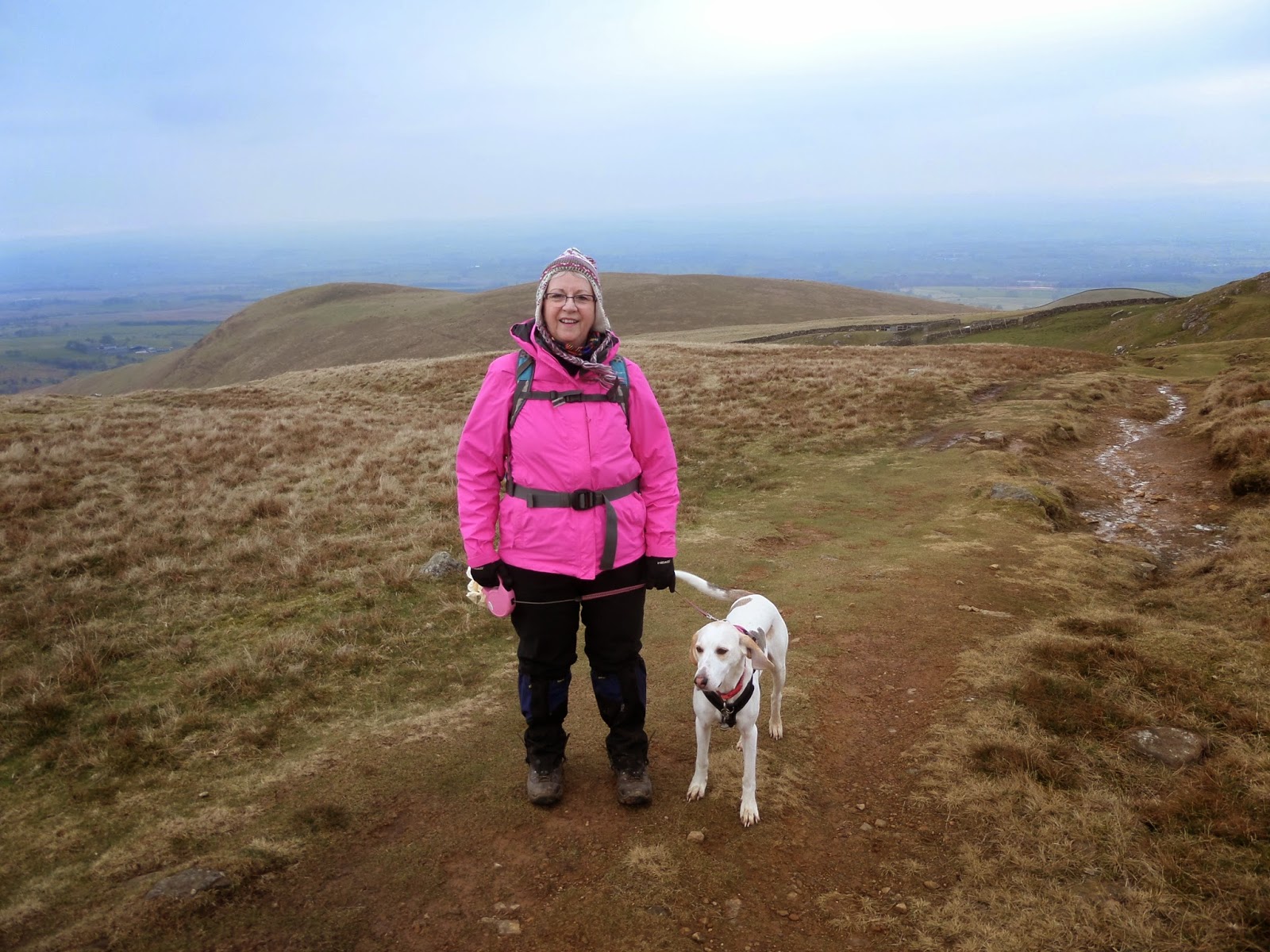 Feeling a bit better after a "pep talk" from my BFF

It was uphill for most of the way till we got close to High Cup Nick and below are some photos taken along the way.  I have to admit it was particularly stunning and vast and the photos probably don't do the actual vision justice. 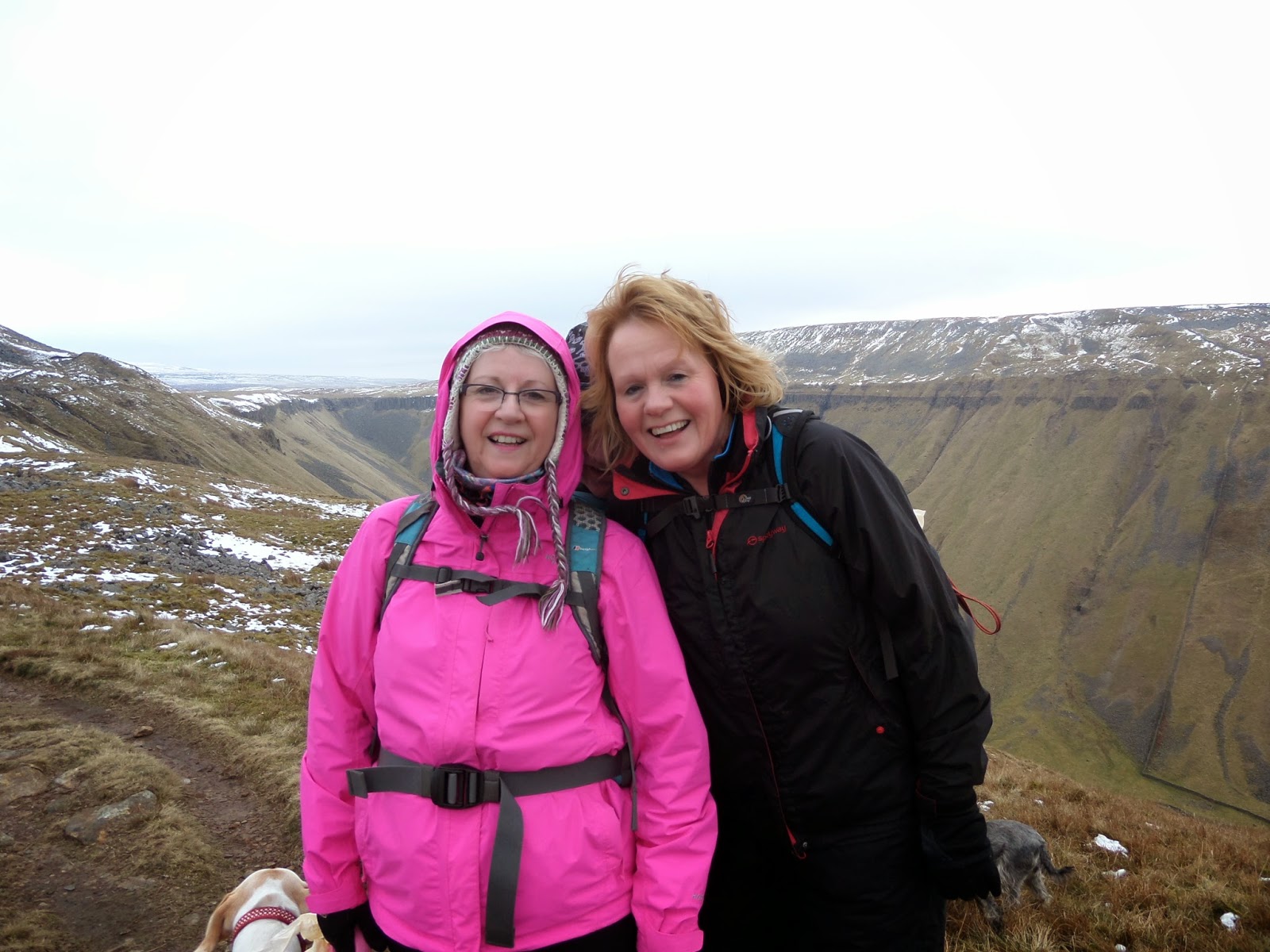 The next part of our route took us downhill and at first we thought it would be too steep and scary but we managed it - poor Brenda was terrified as she hates heights/drops.  I'm OK with things like that but it was a bit hairy at times. 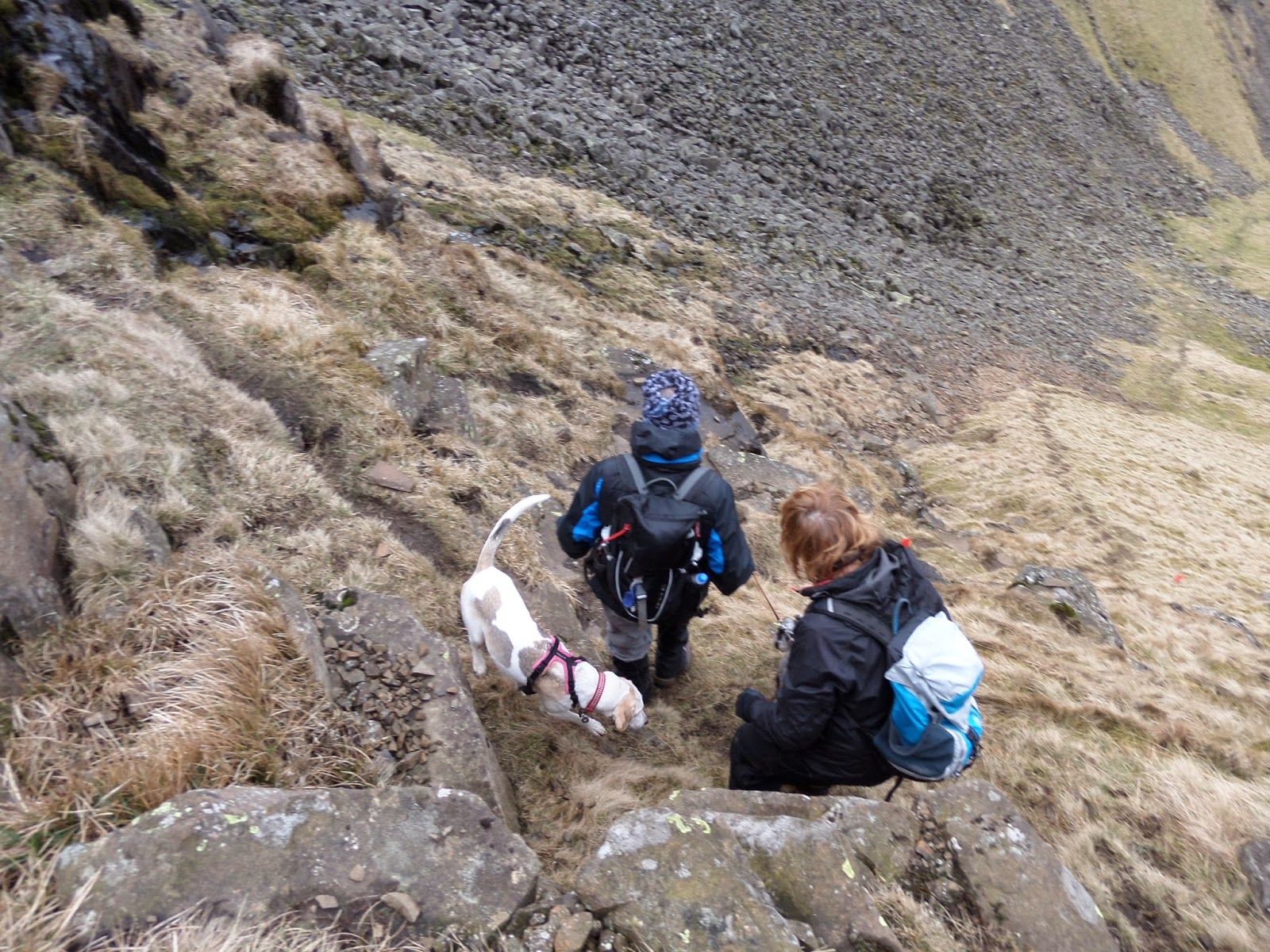 The only way is down.  If you're a white hoond with four legs it's easy peasy lemon squeezy! 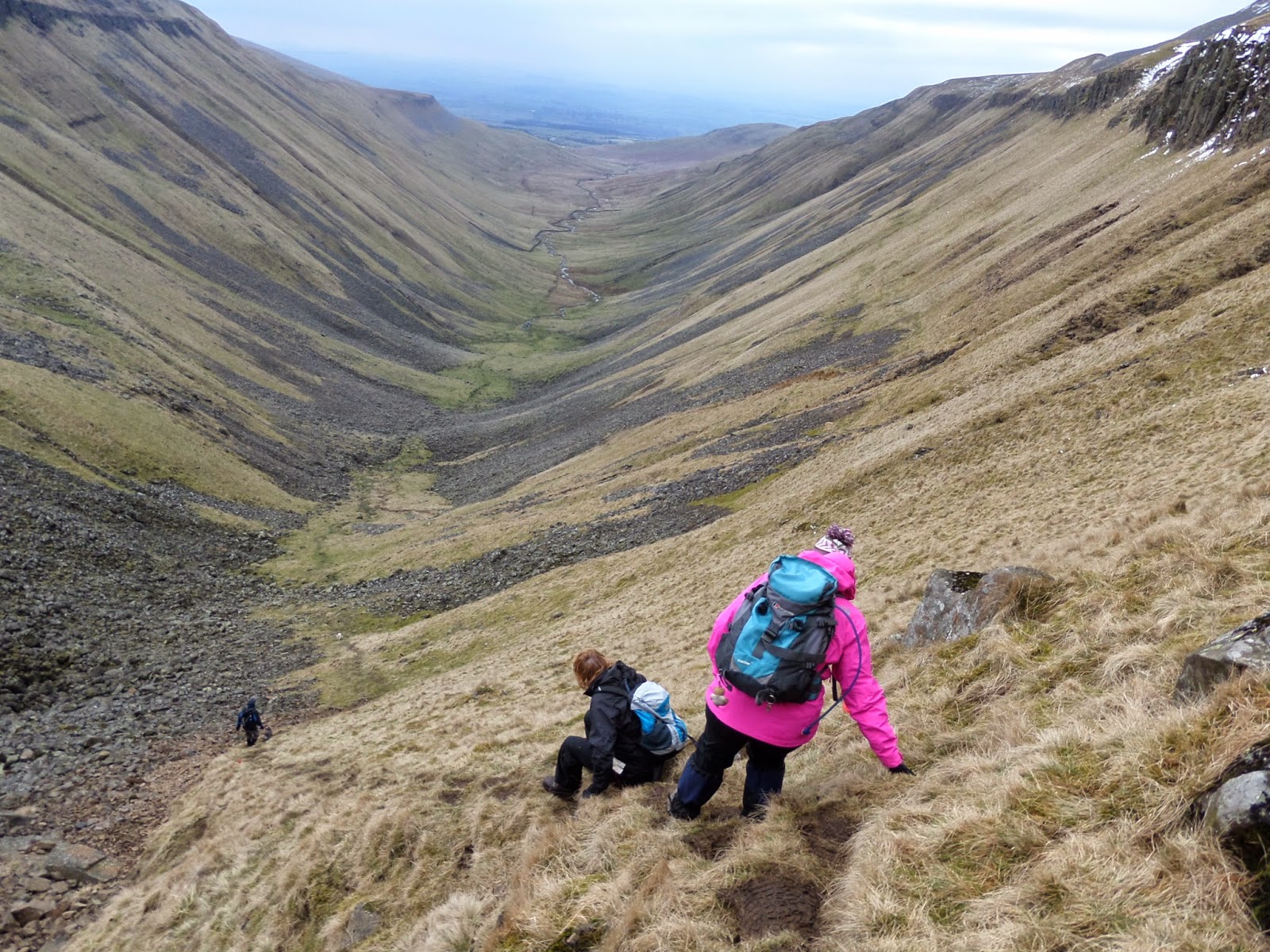 Brenda decided the easiest way down was on her bottom 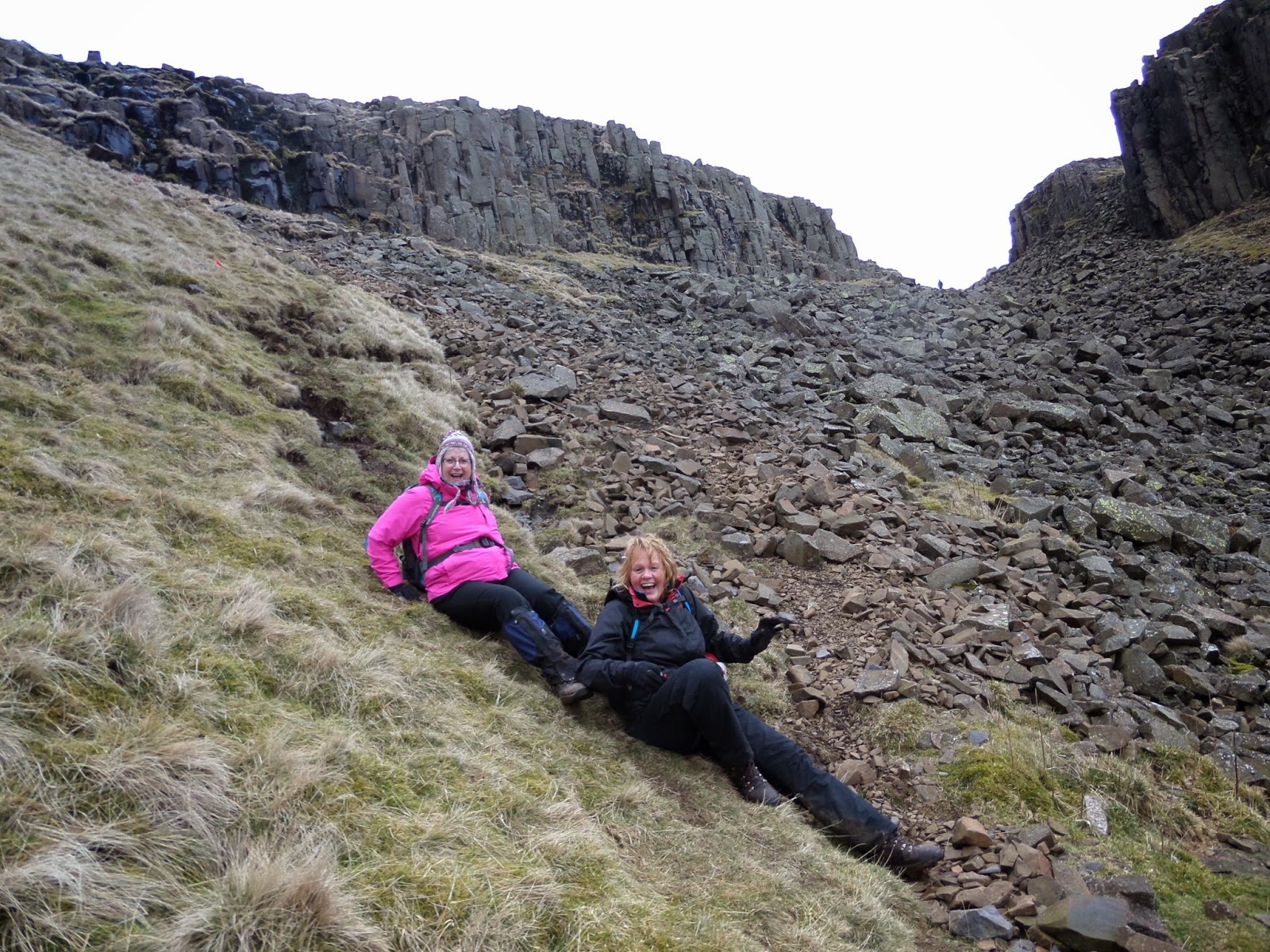 Oops - and they all came tumbling down 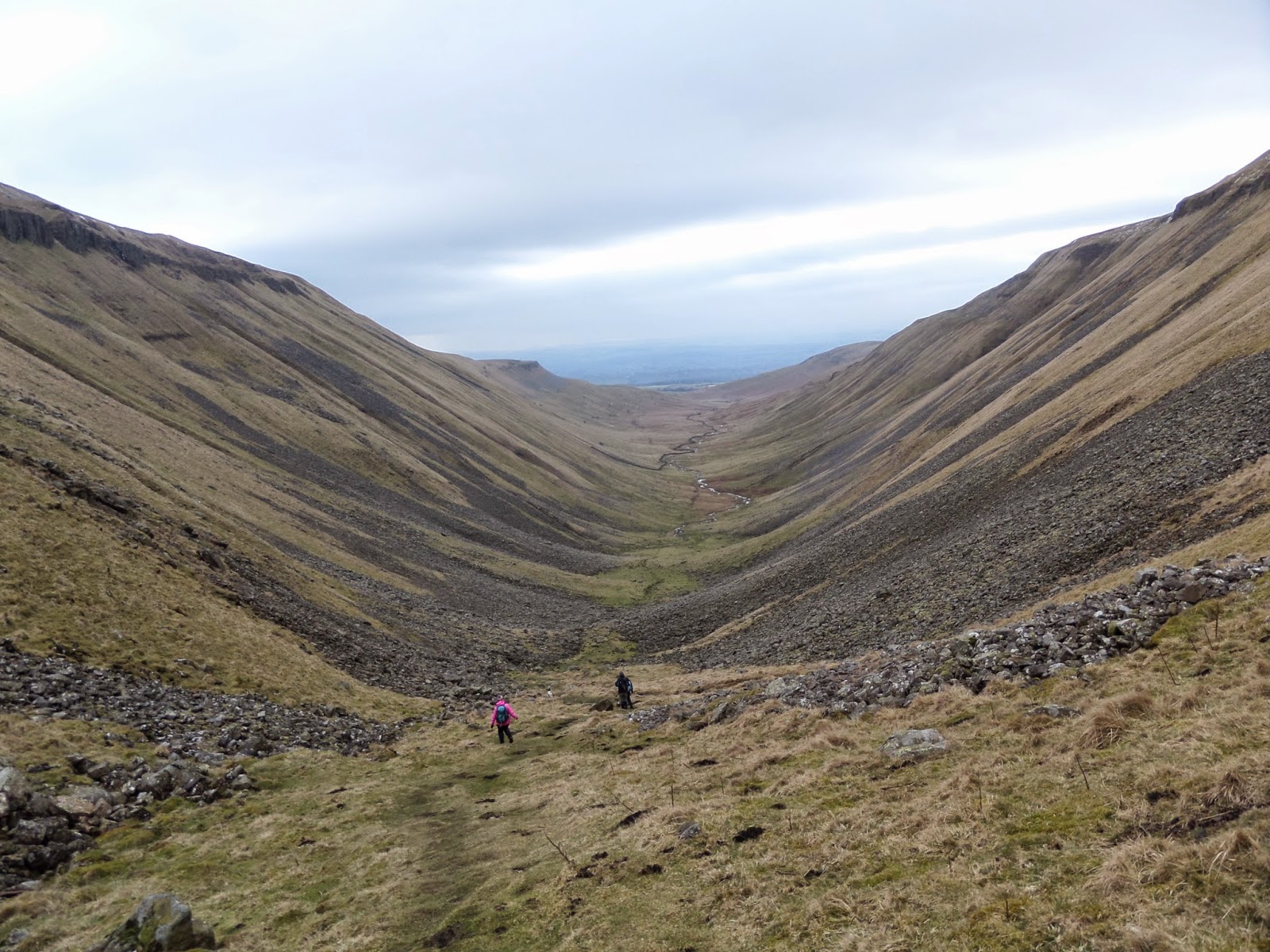 Phew! down at last then we had to pick our way through all the rocks

We'd had Heidi on her lead all the way from the start of the walk to when we had to come down the steep slope at High Cup Nick to get to the bottom of the valley and at this time we let her off so she could pick her own way down.  At the bottom, as there were no sheep for her to "play" with we decided to let her just have a bit of freedom and have a good run around which she did- lets - face it, there was no where she could go!   She was all over the place - loads of lovely smells for a trailhound and she kept coming back when shouted for until she suddenly got a sniff of something much more interesting than us and that was it - she took herself up the right hand side slope in the photo above and no matter how much shouting or whistling we did, nothing was going to get her attention.  She got right to the top and then disappeared over the ridge!

We were stunned and didn't know what to do.  She was out of sight and too far away to hear any noise we were making at the bottom so for a while we just walked along very slowly, planning what we could do to find her, all the time keeping an eye on the hillside and ridge.  After about half an hour she re-appeared at the top so all four of us started shouting and whistling almost hysterically, and luckilly she heard us and ran like a rocket right back to us.  We were soooo relieved as we had started to worry that she might have just ran and ran and we would never have been able to find her.

So, One Girl's dog nearly got put up for re-homing but that would have meant changing my blog's name andI didn't think it would sound right being just called One Girl! 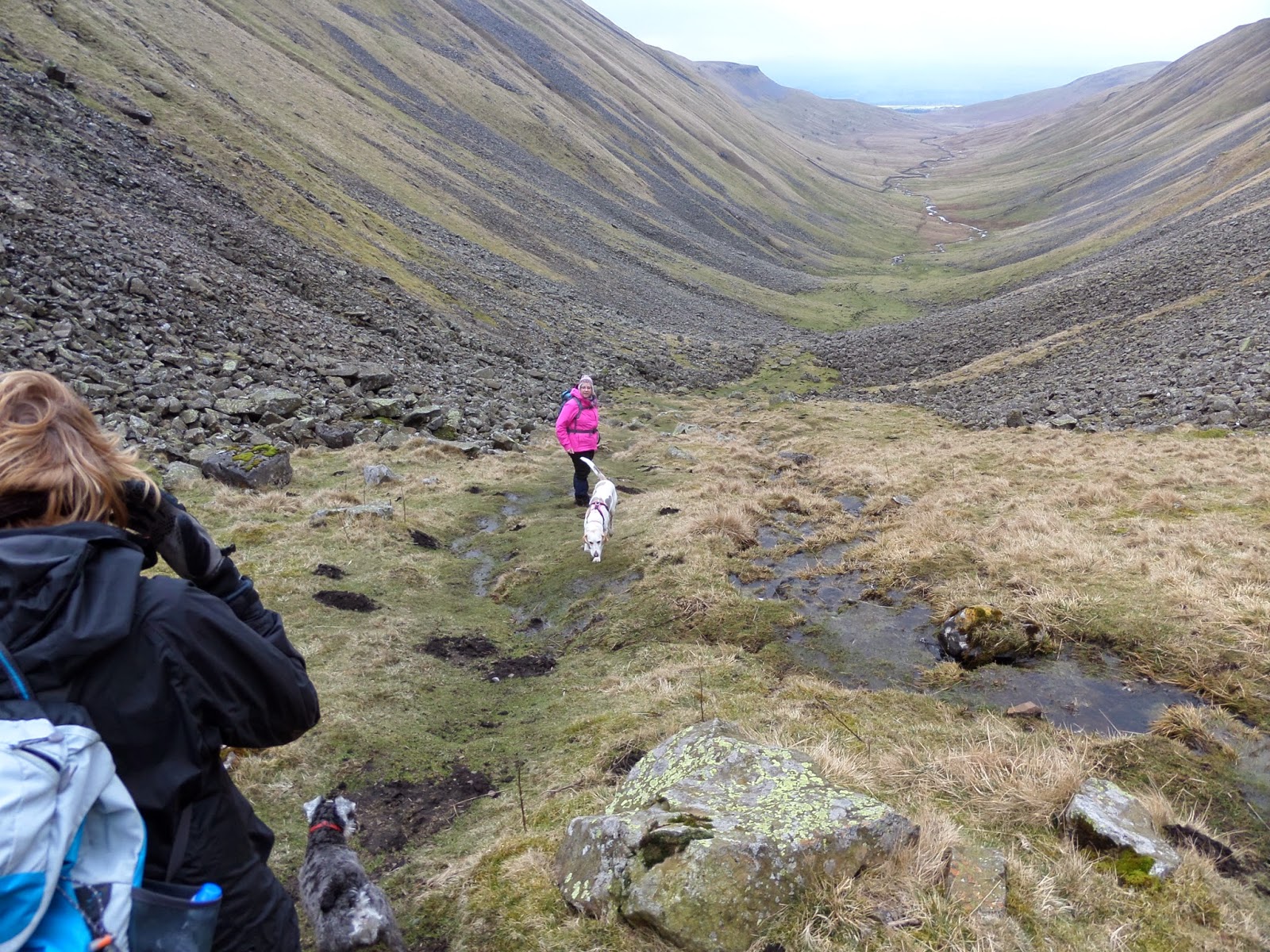 Fantastic view down the valley 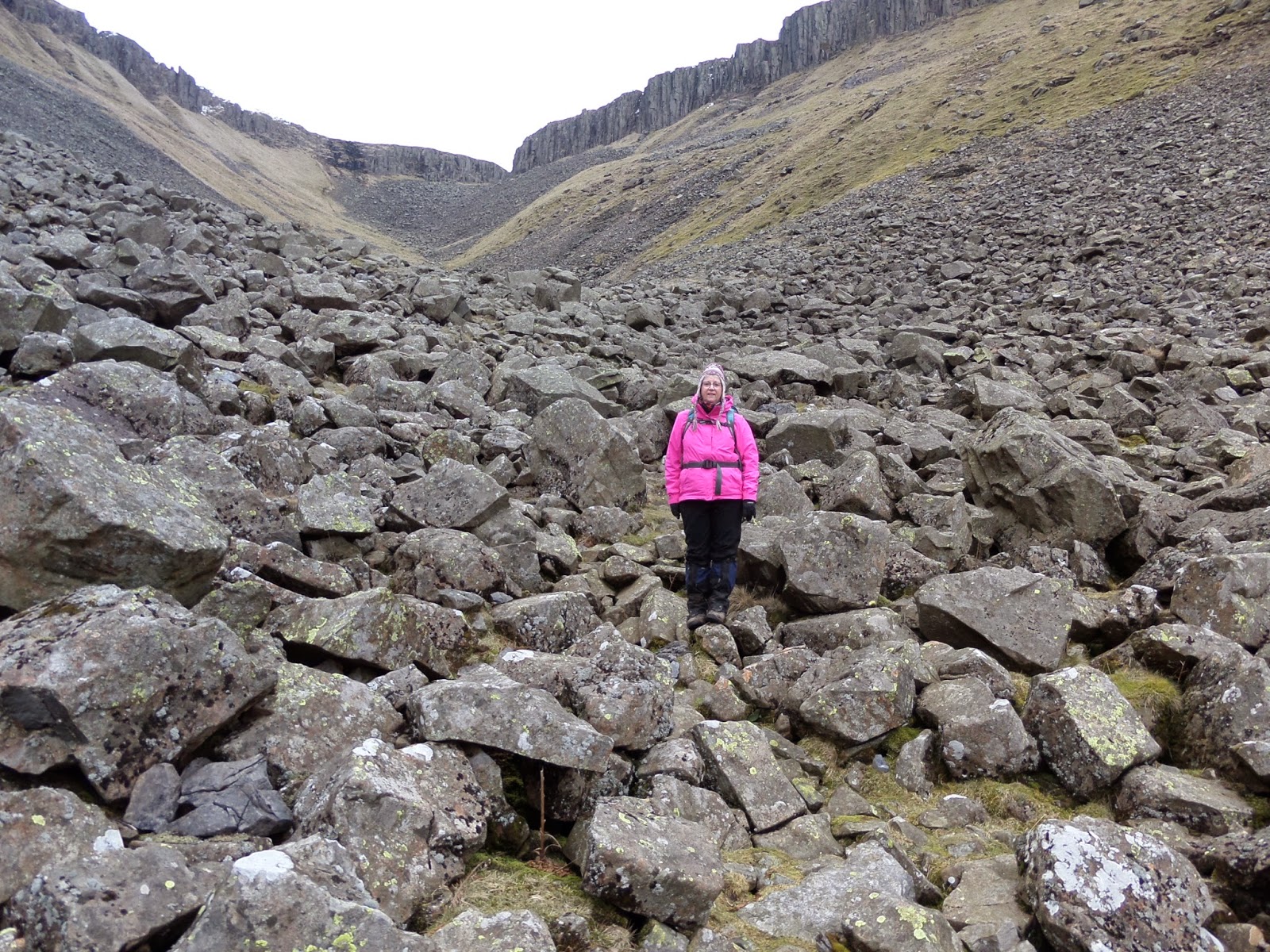 High Cup Nick behind us now

The terrain changed again after coming down the rocky descent and became quite boggy and we had to pick our route carefully.  Because of the escapades of the white hoond we hadn't noticed that we had left the path and were on the wrong side of the stream which we wouldn't be able to cross over as it was getting quite wide, so we had to retrace our steps, fortunately only for a short distance, and get back on the right side. 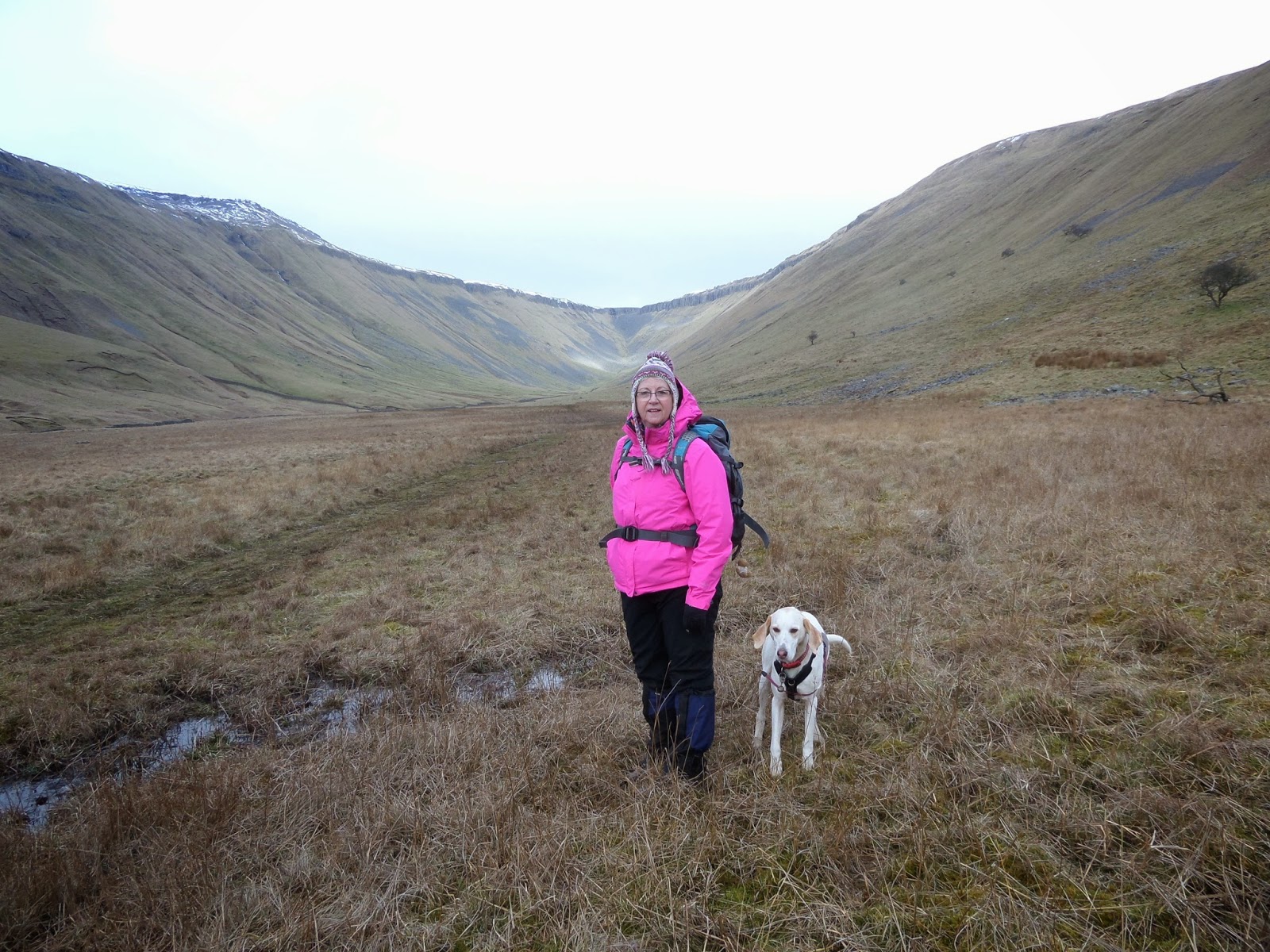 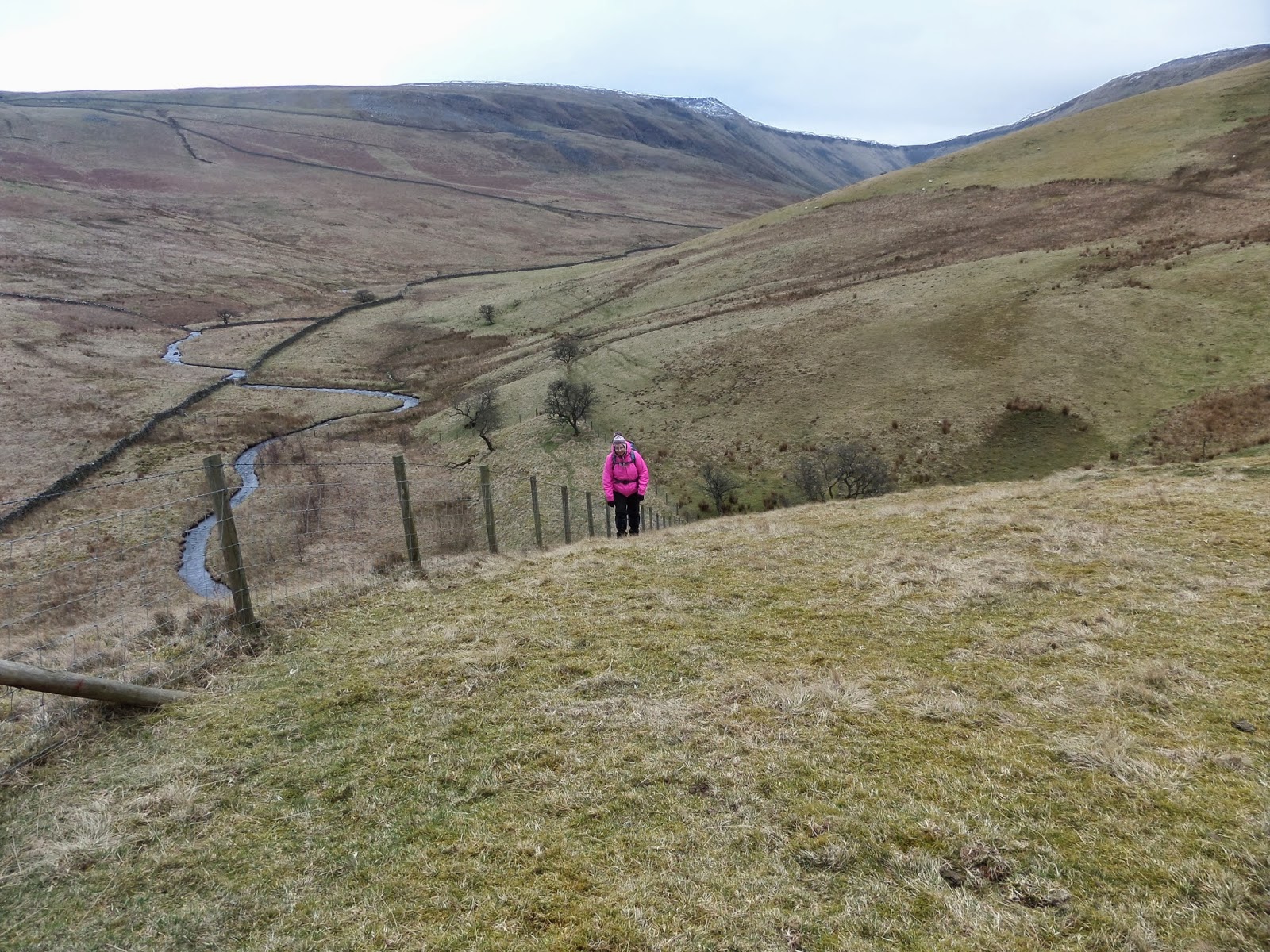 Just when you thought there were no more uphills!!! 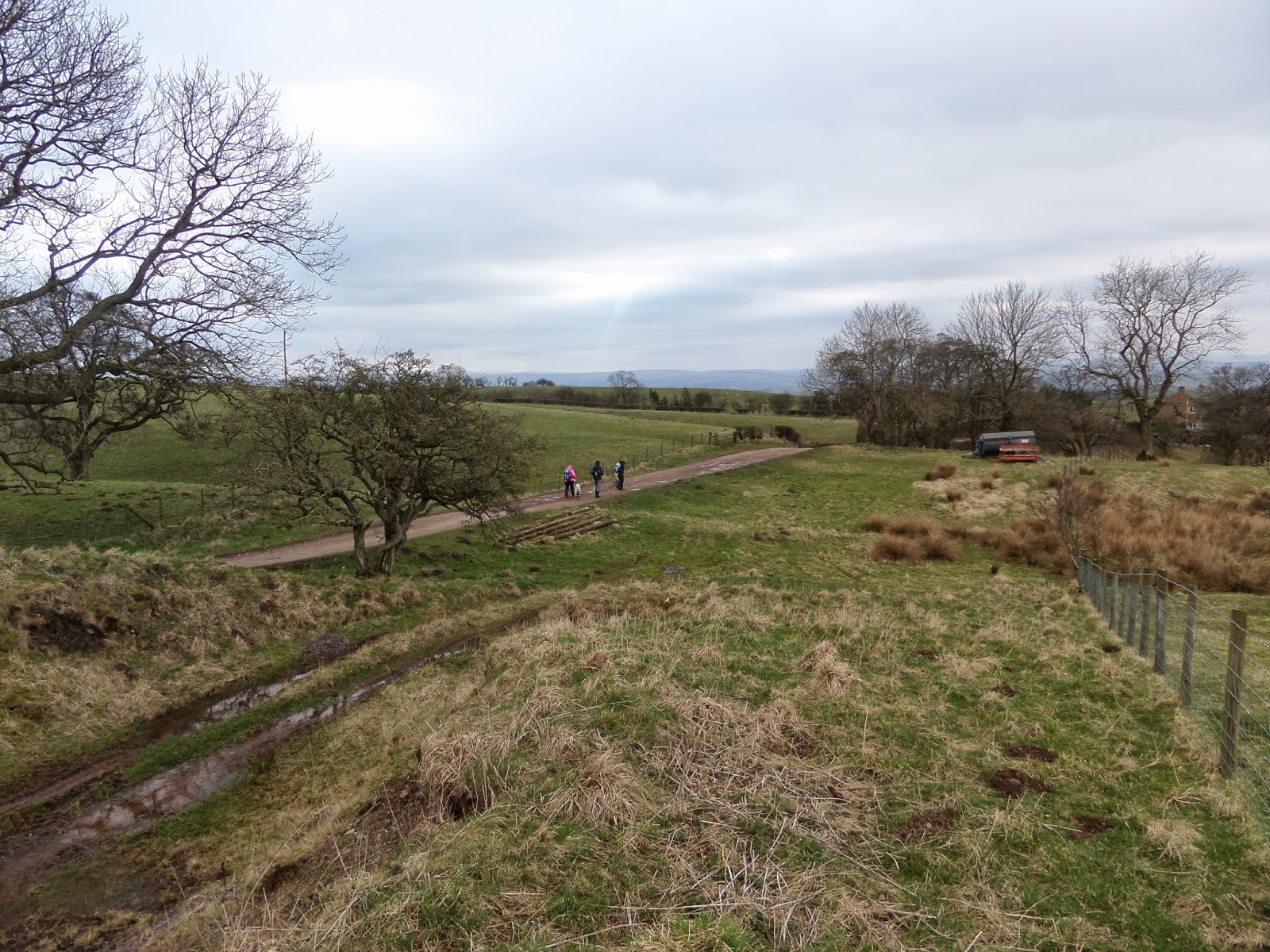 This last photo was taken just before we did the last part of our walk which was on the road.  I don't normally like walking on roads, especially at the end of a walk, but we were actually pleased to be back on even ground with no boggy or rocky bits.

This was an exhausting walk for me (not so much so for Brenda, Paul and Gavin) because my ankle was really painful by the time got back but we found a nice seat in the Stag Inn and I'm sure the pint of cider I had helped reduce the inflammation and pain.  Maybe I'll have a few more the next time and the pain will completely disappear.

Hope you might think of doing this walk because it was truly stunning.  We're planning on doing it again in June or July because a walk is always different if you do at another time of the year.

Distance covered - debatable.  We thought it would be about 6 miles but my map my walk said 10.75 and Brenda's said 8.1 so, I'll check it out later on Memory Map and let you know!