My BFF, Brenda, and her partner Paul meet up every year for a week's walking with old school friends of Paul.  In August 2010 they were meeting in and around Keswick and we got an invite too which we accepted although we could only stay a few days.  This was before the days of having Heidi so you'll notice no dogs on the photos.

We had never met any of the group before and on the Saturday we all met in a pub in Keswick to plan the following week's walks and they soon made me and the Hubster feel very welcome, as if we'd known them for years.

The first walk we did on the Sunday was a nice short one up Latrigg, just to get the limbs moving a bit and on the Monday we were to meet at small parking area near a bridge just past Little Town to do the Newlands Horseshoe.  Brenda found the walk in one of our walking books and apart from missing out one Wainright (Hindscarth) we followed the instructions and had the most fantastic walk we'd ever been on. 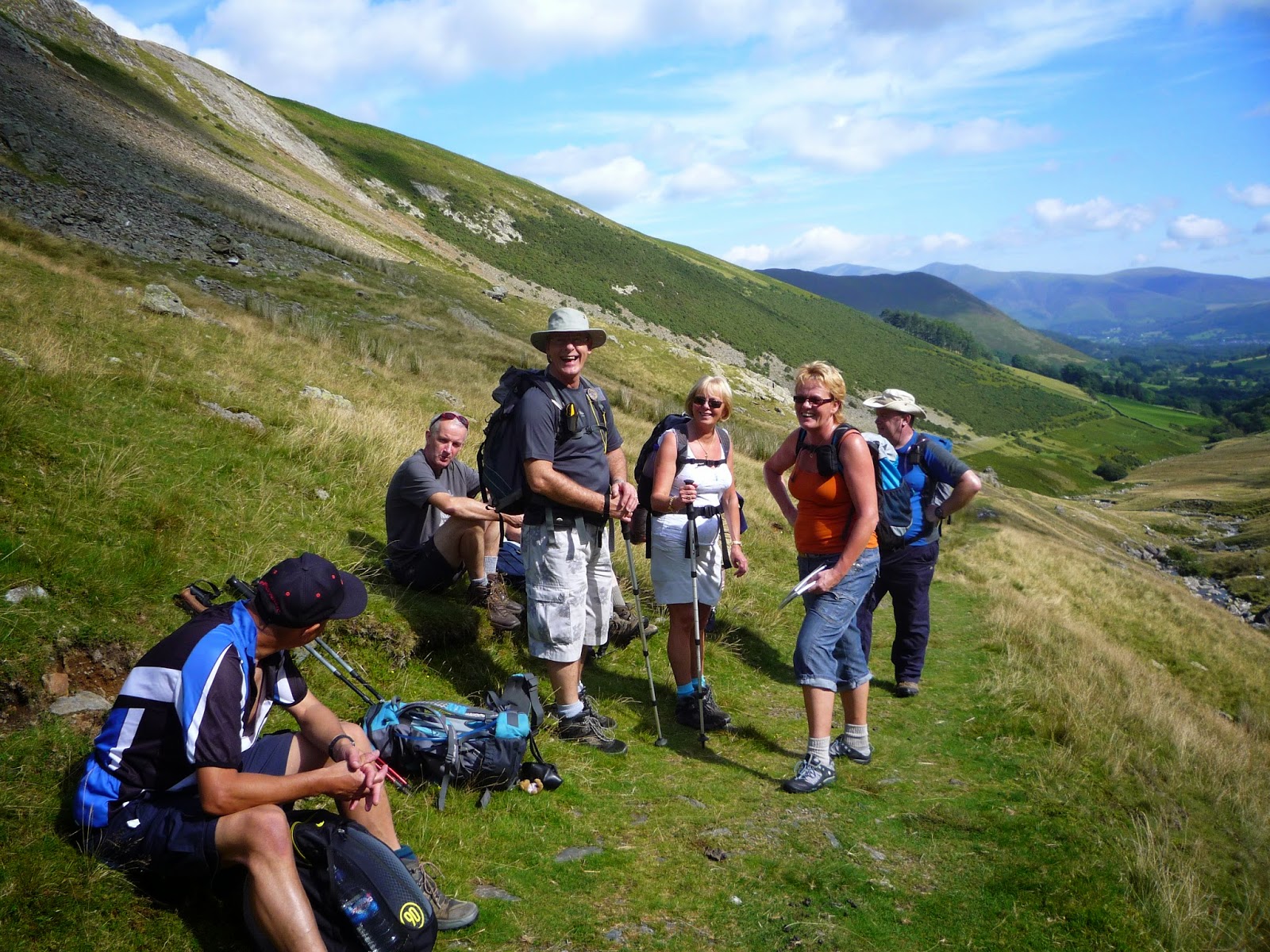 Our first "stop to look at the view" break haha

I have to admit we had no idea what was to come as we just followed the leader but knew it was going to be a long day.  I can't remember exactly but it was around 8 or 9 miles and was made harder by it being probably the hottest day of the year!  Of course the clear, blue skies ensured the views were spectacular but meant that some of us were just exhausted by being too hot.

The route took us along the Newlands Valley and up to Robinson.  There were some minor disagreements about some of the route - not everyone's interpretation of the instructions were the same but in the end we got to where we were meant to be, even if it meant scaling an extremely steep hillside which scared the beejeebers out of Brenda who hates heights.  Well the book did say take the path up to the single tree at the top of the hill!! 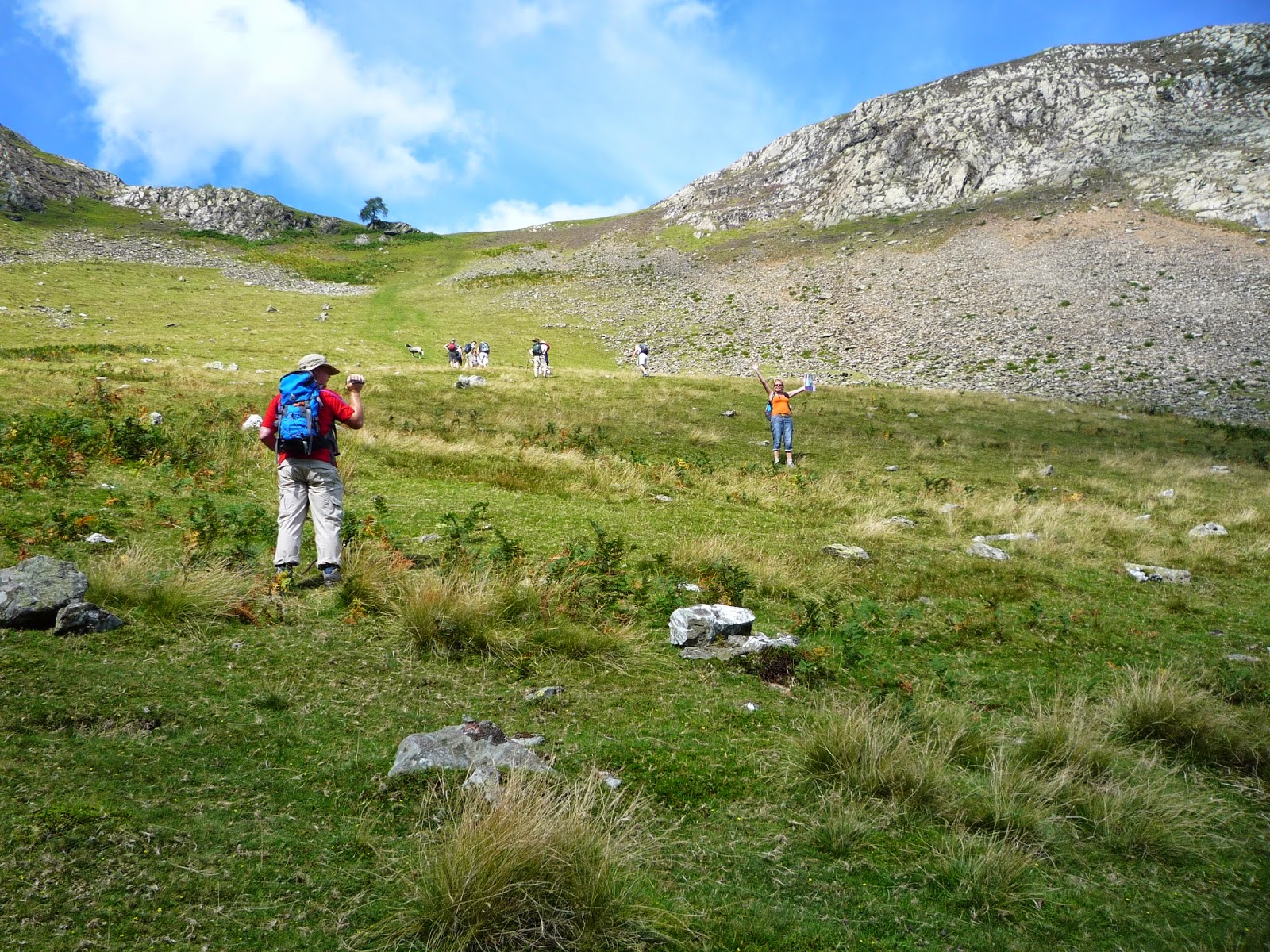 There's the tree in the distance - this photo doesn't show how steep the climb up to it was.  Brenda got half way up and wanted to go back down and abort the walk but we managed to persuade her to continue. 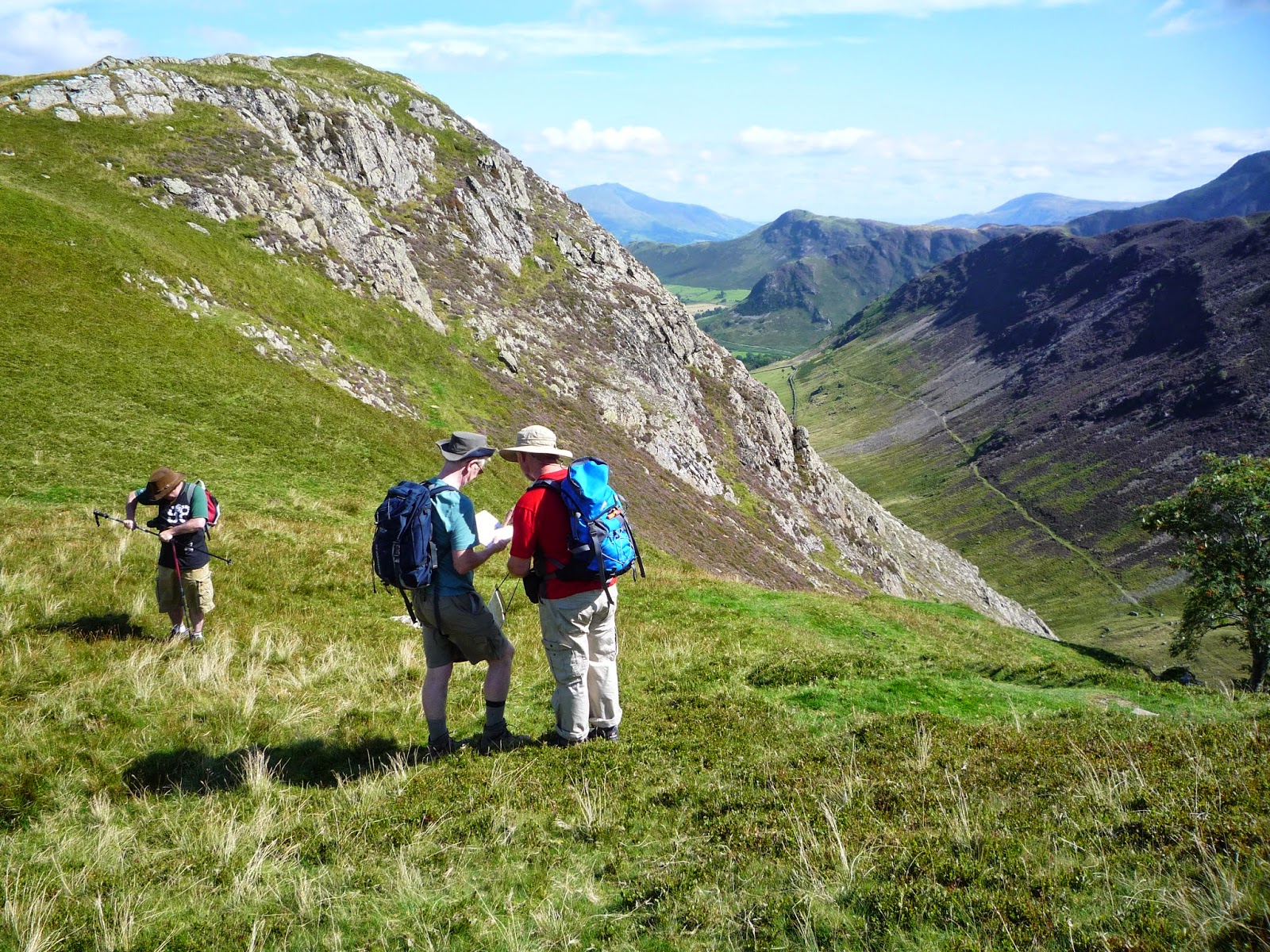 The rock-face shows the incline here a bit better

After Robinson we went on to Dale Head, High Spy, across Maiden Moor then towards Catbels.  Once there we went down the hillside back to Little Town and the cars. 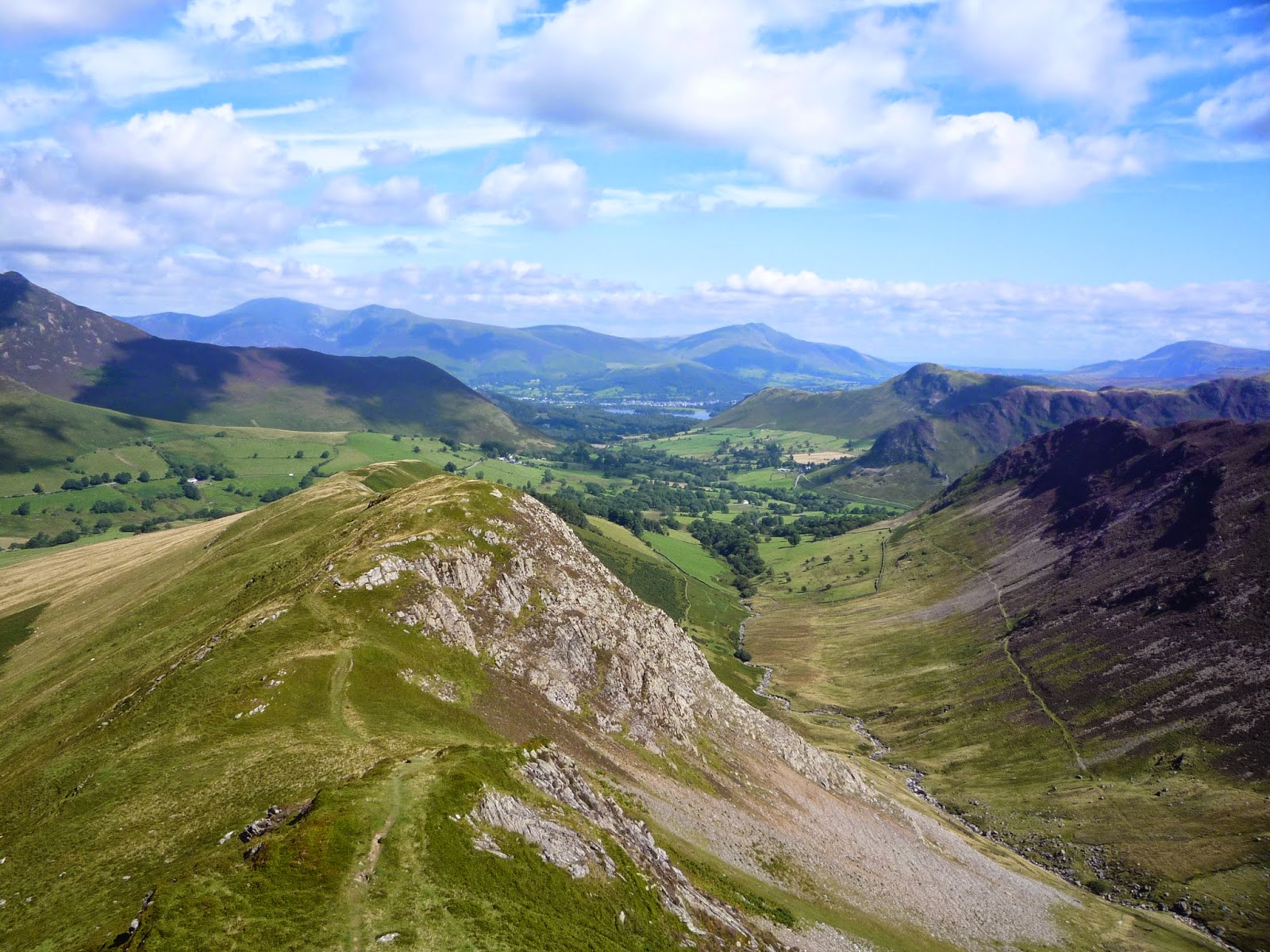 What a view down the Newlands Valley 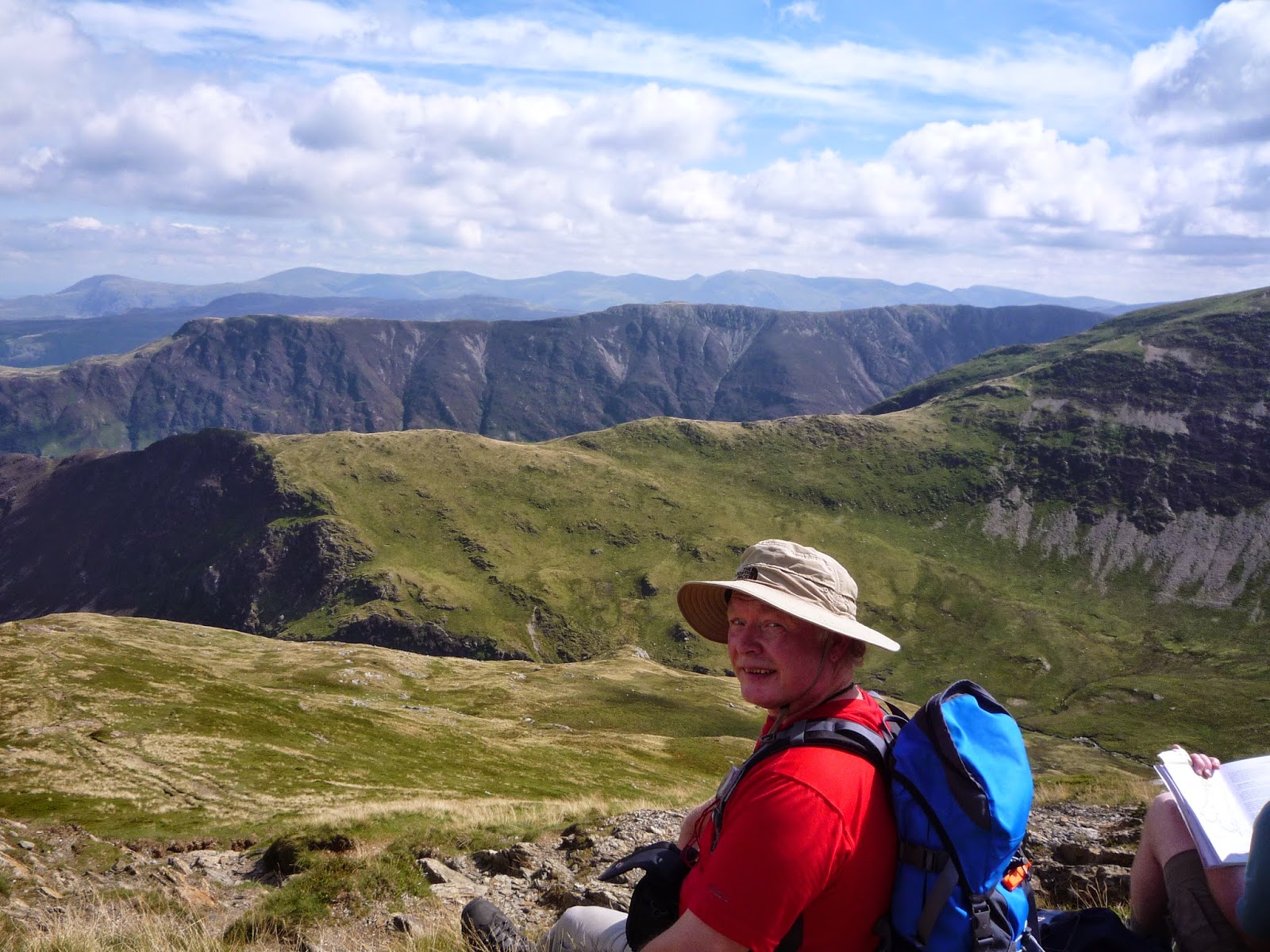 Looking a bit warm there Hubster! 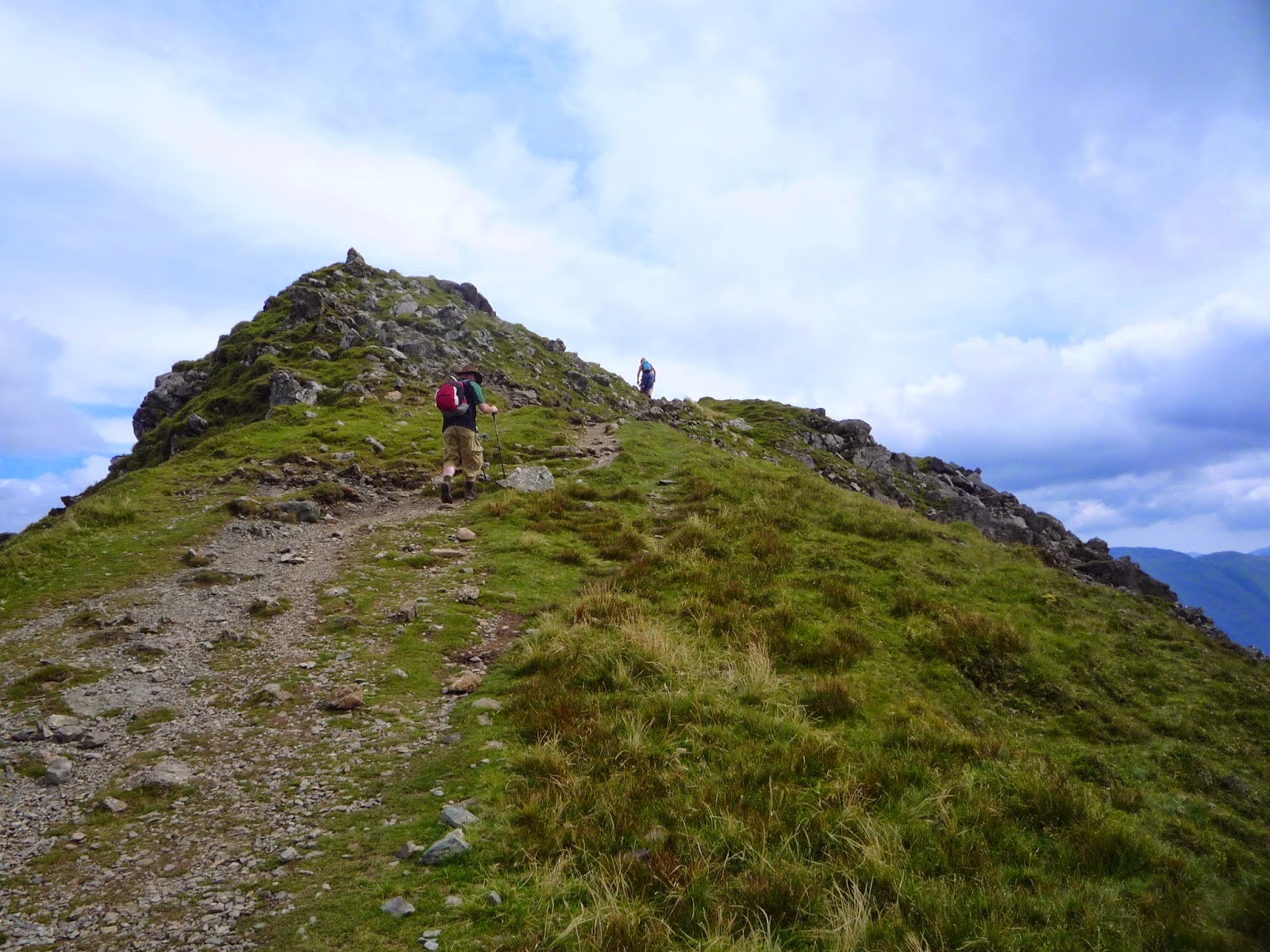 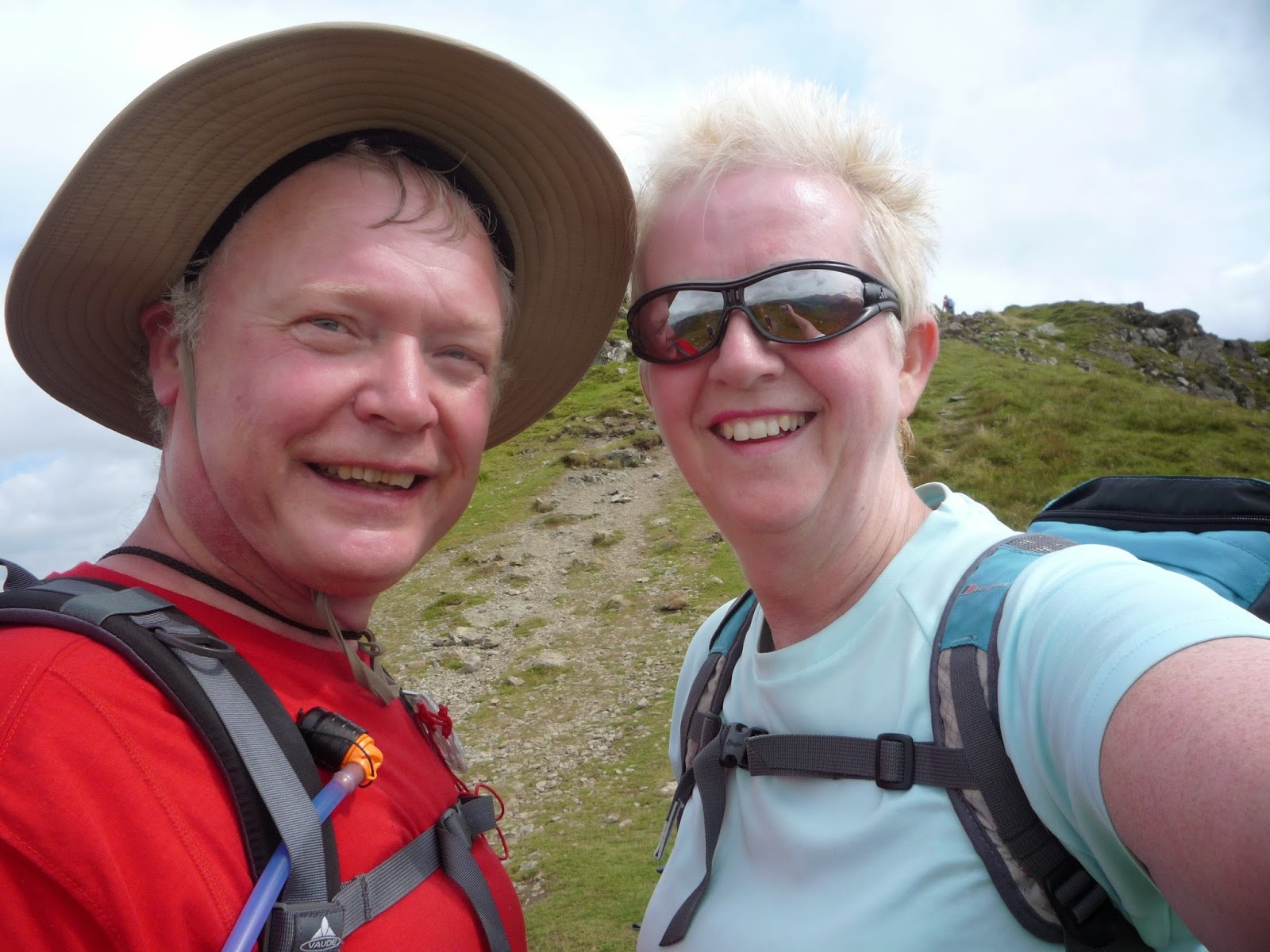 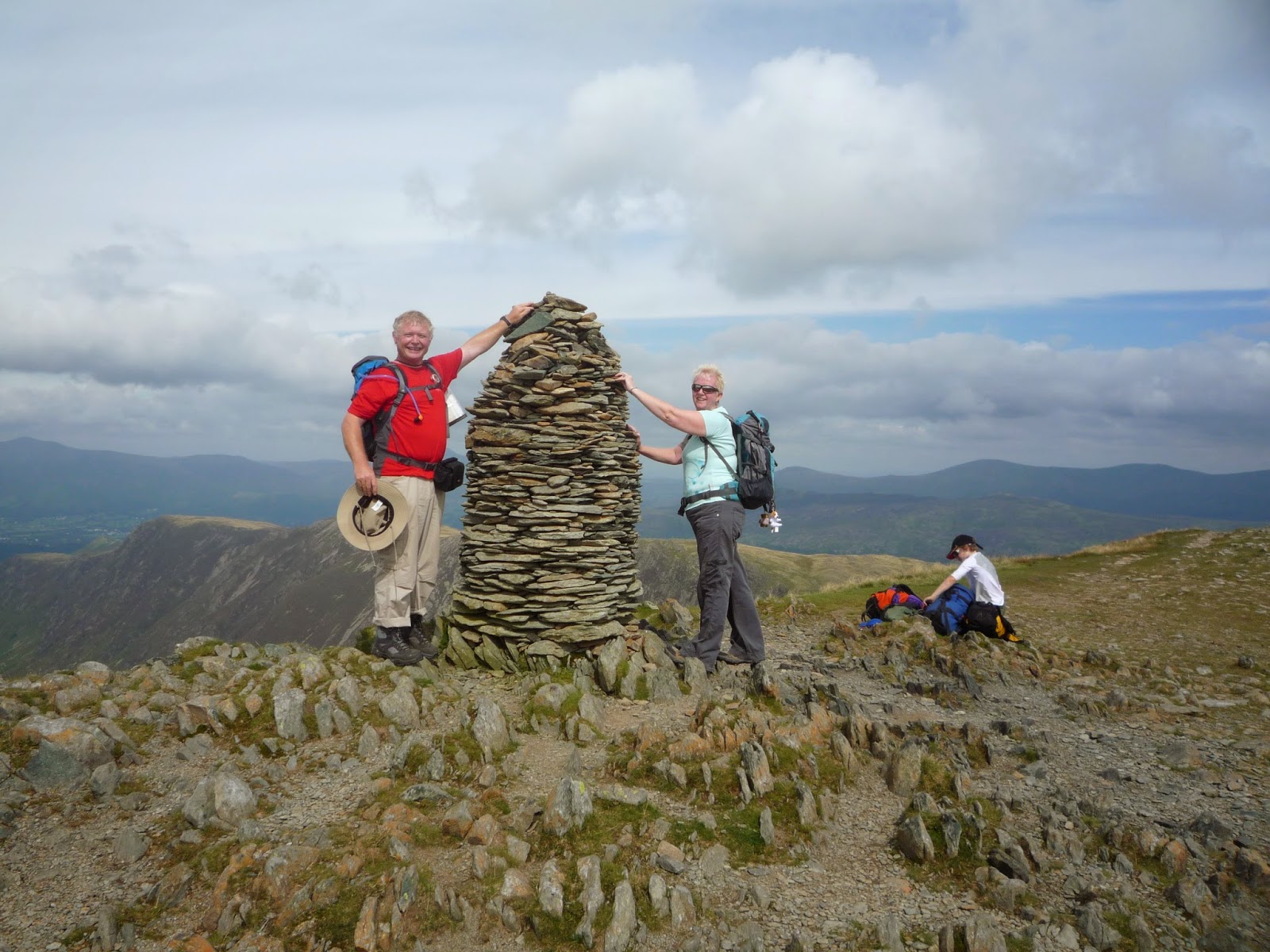 Yey! the cairn at the top of Dale Head 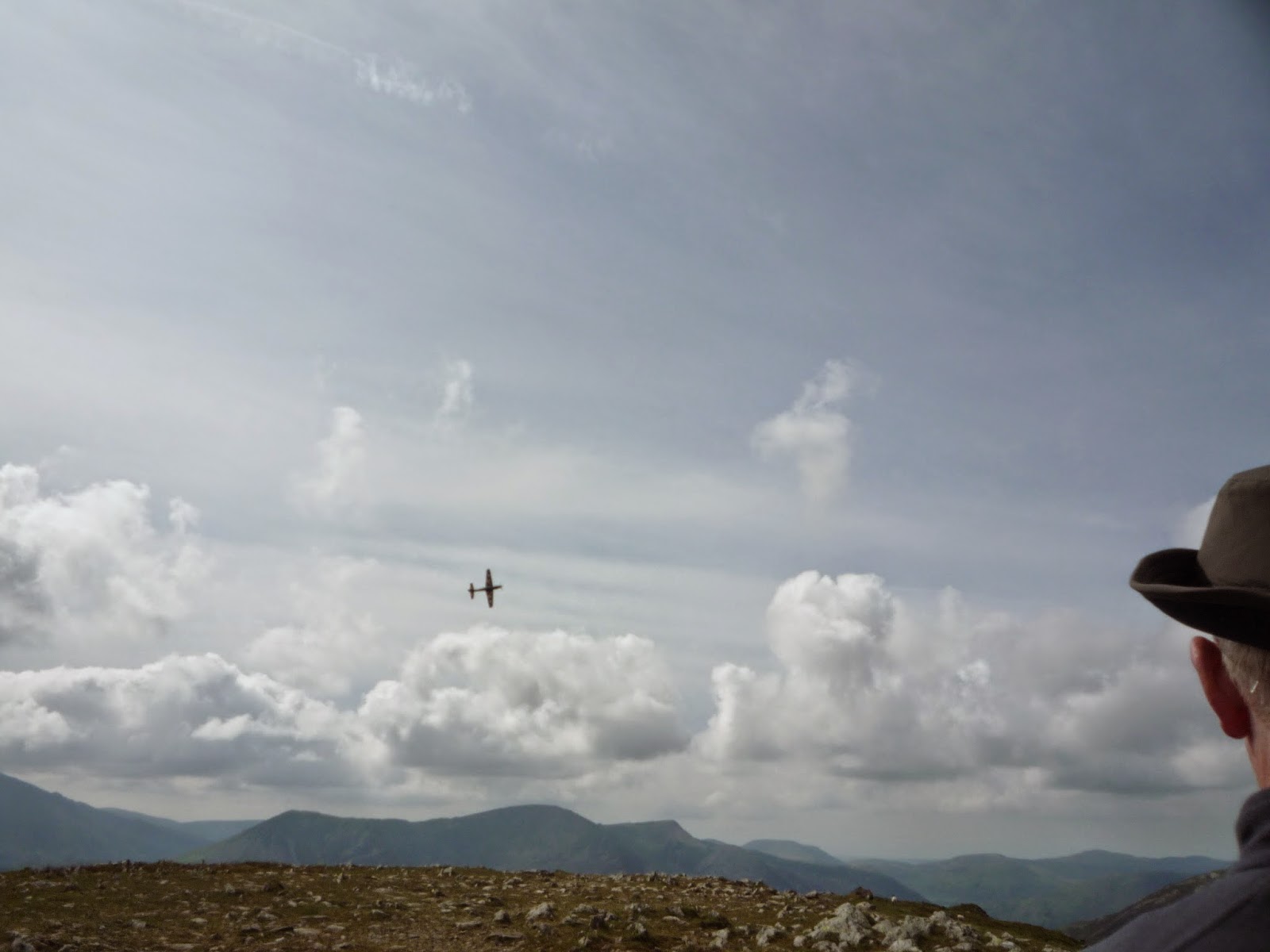 Couldn't believe it when we got buzzed by a Hurricane? Bomber 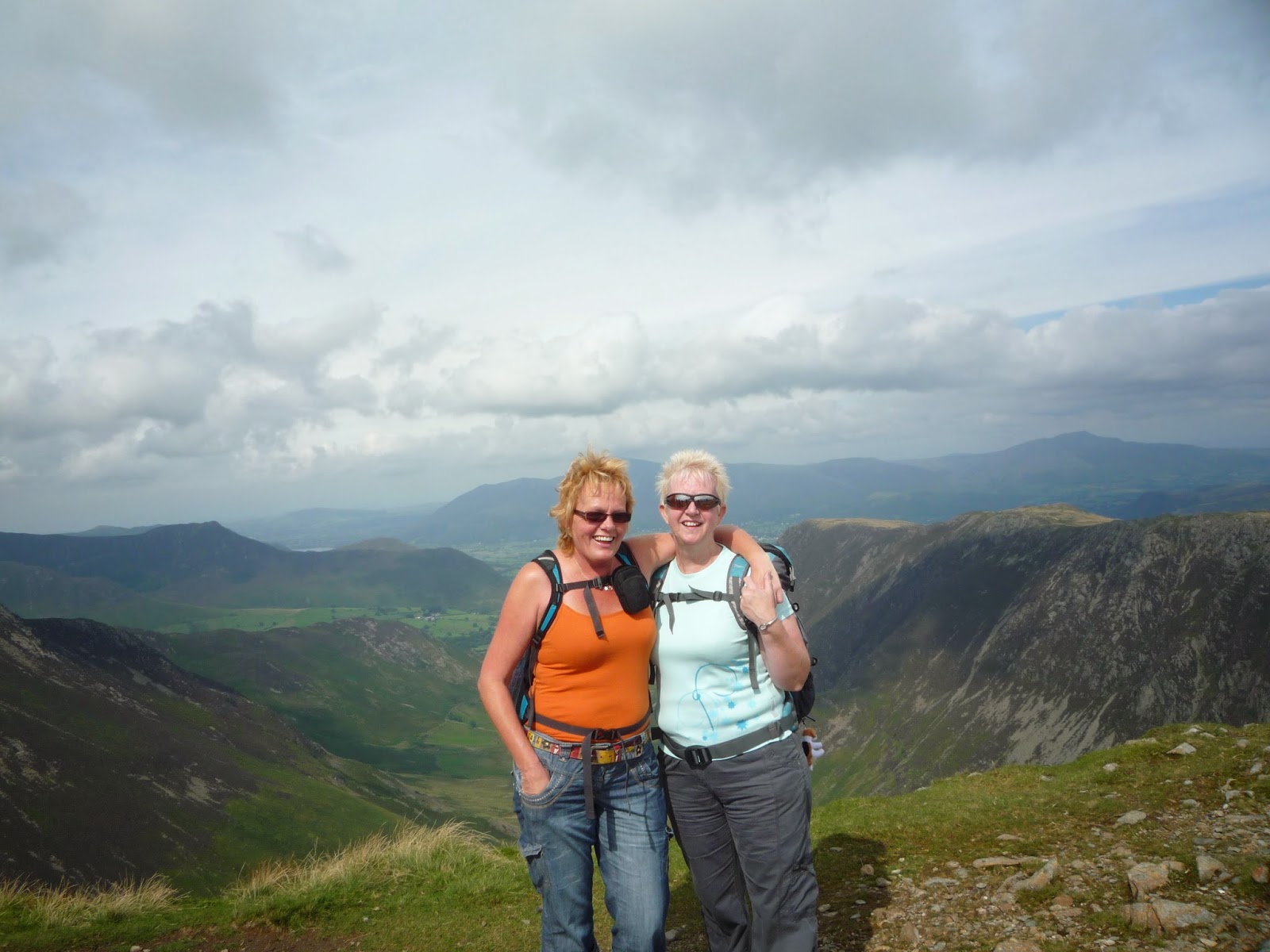 This was the hardest walk in the Lake District I'd ever done but was the best at that time.  We were all exhausted but in a good way -  never been so glad to see a car in my life haha.

If you've never done this walk I really would recommend it.  The sense of achievement at the end was euphoric, even though were were all knackered and I could hardly walk for three days ha ha ha.